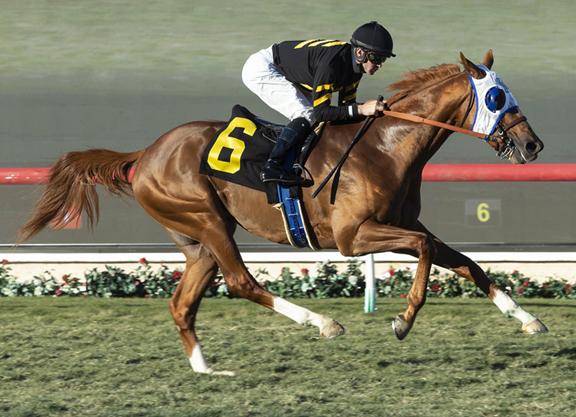 Flying Scotsman, a clear favorite in the six-horse GIII Cecil B. DeMille S. Sunday, justified the public's confidence with a romping victory in his first try against winners. Third sprinting on the local lawn Aug. 8, the Calumet homebred stretched out effectively to don cap and gown by a nose going this distance at Santa Anita Sept. 29. He sat in a clear second early as Vantastic showed the way through splits of :23.02 and :46.92. The chestnut turned up the heat on the frontrunner midway around the bend, seized command in upper stretch and bounded away with powerful strides to put a significant gap between he and the competition at the wire. Rijeka edged Vantastic for second.

“He doesn't act like a 2-year-old; he's very professional,” said winning rider Flavien Prat. “When I asked him today, he gave me a very good kick. He feels like he'll run on and on.”

Hall of Fame trainer Jerry Hollendorfer added, “He's done very well since we've had him. Usually I like to sprint them twice, but he didn't seem to like that, so we put him at a mile the second time out and he liked that. Since then, he's trained very well and looks like a pretty good prospect. He rated perfectly today and he had a great trip. I think we'll stay on the grass with him in the future, if that's possible.”

Flying Scotsman is the 41st stakes winner and 18th graded winner for his sire. His second dam is English SW/GSP Double Lock (GB) (Home Guard), herself the dam of two group winners. The very productive Padmore, who was purchased by Calumet principal Brad Kelley's Bluegrass Hall while carrying MGSP Star Hill (Elusive Quality) at the 2012 Keeneland January sale, produced another Elusive Quality colt in 2017. After failing to get in foal last year, she visited Bal a Bali (Brz) earlier this term.