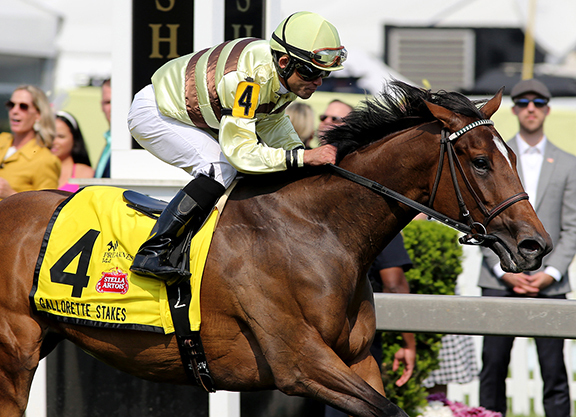 Mitchell Road (English Channel) was already worth a considerable amount of money entering Saturday's GIII Gallorette S., but her value increased exponentially, as the year-older half-sister to promoted GI Kentucky Derby hero Country House (Lookin At Lucky), was given a perfectly rated ride from the front by Joel Rosario and proved easily best for a first graded-stakes victory.

A half-step slow to begin, Mitchell Road was hustled along and was able to secure the lead with relative ease prior to passing under the wire for the first time as Dynatail (Hightail) pressed to the outside. Racing a touch freely through an opening quarter mile in :23.28, Mitchell Road settled a bit better in the middle stages, with an internal couple of furlongs in :23.79, as positions behind her remained unchanged. Racing ears-pricked into the final 3 1/2 furlongs, Mitchell Road drifted out ever so slightly off the home corner, but she responded gamely to a right-handed stick in upper stretch and then vigorous hand riding in the final furlong to win as much the best. Thewayiam (Fr) (Thewayyouare) rallied up the fence for second ahead of Viva Vegas (The Factor), who charged down the center of the course for third.

“She's never been out of the exacta and she's developed into a very nice filly,” said assistant trainer Riley Mott. “She got a little bit sick after her race at the Fair Grounds, and needed a little time to recuperate, which is why you're only seeing her now at Pimlico. She always trains very forwardly, very willingly and she surely ran well today. She gave her little brother [Country House] a big update there.”

Mott said the GI Just A Game S. on the Belmont S. undercard could be next for Mitchell Road, who graduated in her sophomore debut at Gulfstream before going missing off an allowance second in Hallandale Beach in March. She had run the table since, resuming with an Aqueduct allowance tally Dec. 7 and another at Gulfstream Jan. 18 ahead of a defeat of recent GII Distaff Turf Mile winner Beau Recall (Ire) (Sir Prancealot {Ire}) in the Stall Memorial S. at the Fair Grounds Feb. 16.

Like Country House a paternal son of Smart Strike and like Lookin At Lucky descending from a Danzig female line, Mitchell Road is out of a daughter of turf GISP Shooting Party (Sky Classic), whose son, the GSW & MGISP Breaking Lucky (Lookin At Lucky), was an overachiever, many times at longshot odds. The late Joe Shields, Jr. bought out co-breeder Robert Clay when paying $47,000 for Quake Lake at the 2007 Keeneland September yearling purchase. The mare, who was bought back for $25,000 when carrying Mitchell Road at Keeneland November in 2014, died in 2016. Mitchell Road is the 21st graded winner for English Channel.