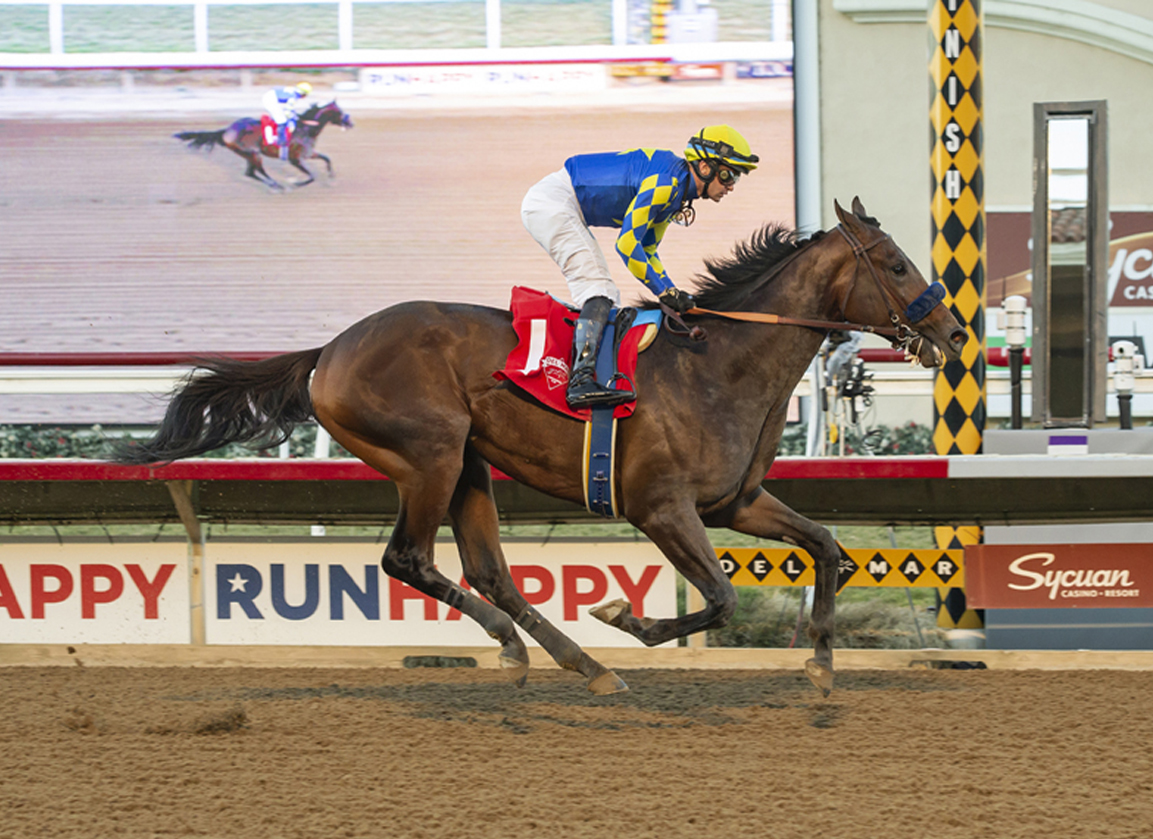 Heavily-favored Messier sat off of a supersonic pace in Sunday's GIII Bob Hope S. at Del Mar and rallied to score going away in the end, giving Bob Baffert–who had three of the four starters–his 11th victory in the seven-furlong test for 2-year-old males.

Hammered down to 1-2 favoritism on debut June 27 at Los Alamitos, the $470,000 Fasig-Tipton Selected Yearling buy cruised to an easy 6 1/2-length graduation off a brief layoff Oct. 22 at Santa Anita to earn 'TDN Rising Star' honors. Taking the bulk of the play here while removing blinkers, the bay broke smoothly but was out-footed by his three rivals early and sat at the back of the pack under Flavien Prat as the lone non-Baffert entry, Forbidden Kingdom showed the way through a scorching :21.40 half. Poking his head into third as the half went up in a blistering :43.23, he spun into the clear approaching the lane as the field started to condense. Forbidden Kingdom fought valiantly until around the eighth pole, but the early fractions took their toll and Messier took charge before kicking clear for a comfortable victory in the end.

“We were in a good spot,” said Prat. “There was plenty of pace in the race and that was to our advantage. When I asked, he was there. And I think this horse will be fine with running on.”

“Messier shipped down this morning. He didn't train here during the summer and had never been here,” added Baffert. “First time on a trailer, first time he'd seen Del Mar and he walked into the paddock like he owned it. The track is pretty glib so the fractions were fast. In the summer, 21 and [two] wouldn't hold up, but this time speed carries and they were rolling.”

Pedigree Notes:
With the win, Messier becomes the 67th stakes winner and 37th graded stakes winner for the late Empire Maker. He's the lone foal to race thus far out of his dam, who took back-to-back renewals of Woodbine's Trillium S. in 2014 and 2015. His third dam is Canadian champion Catch the Ring (Seeking the Gold), who in turn produced a Canadian champion in Catch the Thrill (A.P. Indy). Sold to Silesia Farm for $290,000 as part of the Sam-Son Farm dispersal at Keeneland January this year, Checkered Past foaled a Candy Ride (Arg) filly Feb. 7 before being bred to Authentic.