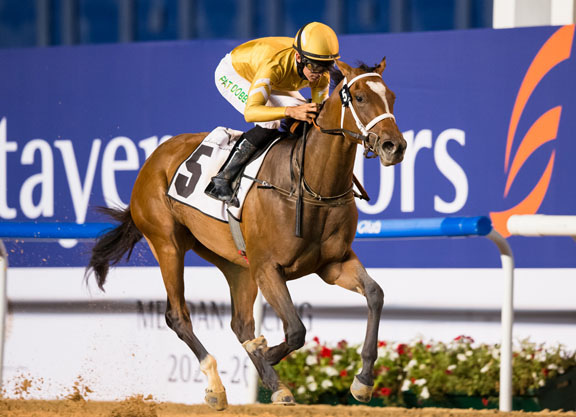 Mnasek (Empire Maker), a $15,000 purchase by Al Rashid Stables at the Fasig-Tipton Midlantic Sale last June, continued to write her fairytale story at Meydan on Thursday, posting her second win from three starts and first stakes win with a facile score in the G3 UAE Oaks. A longshot 6 3/4-length winner on debut going seven furlongs at Meydan on Dec. 17, Mnasek had to settle for second, seven lengths behind Saturday's Saudi Derby contender Soft Whisper (Ire) (Dubawi {Ire}), after missing the break in the Listed UAE 1000 Guineas up to a mile on Jan. 28.

Away much more smoothly up to 1900 metres on Thursday, Mnasek broke on top from the rail but soon dropped back to allow Jumeirah Beach (Ire) (Exceed and Excel {Aus}) to take up the running. Fourth and about three lengths off the lead rounding the first bend, jockey Pat Dobbs made a deliberate move to put the filly on the outside midway down the backstretch and she was poised ominously four-wide rounding the bend. Shooting to the lead as they straightened, Mnasek drew clear effortlessly to crush her overmatched opposition by 6 1/2 lengths. Nayefah (Super Saver) made eye-catching headway late to be second, while Last Sunset (Ire) (Teofilo {Ire}) was third.

Winning trainer Doug Watson said, “She just goes out there and tries hard. We've done very little with her since she [last] ran. She's a small filly and she has a lot of talent. We worked her in company out of the gate and that helped. Today she didn't enjoy being behind and when she was tipped out you could see it. She was the best filly. I don't know if they'll want to run her in the [G2 UAE] Derby, but who knows. Fair dues to Shane [Ryan, starter] and the gate crew. They did a great job helping us out. Obviously, she's a little funny in the gate and she broke great tonight. [The owners] should send her to America. That's her second win here. She's got a lot of options over there. If she stays sound and training like she is, she could win over there.”

Dobbs added, “She's very brave. She didn't enjoy the early part of the race, getting the kickback, but once she got out, she travelled super. She stays very well. She's a little bit light-mouthed, but she's got a big heart and is a lovely mover.”

Mnasek is the sixth foal out of her GII Bayakoa H.-winning dam Washington Bridge (Yankee Gentleman), who was bred by Brereton Jones and bought by Don Alberto Corp. for $750,000 at Fasig-Tipton's November sale in 2013 in foal to Tapit, having been bought by Town and Country Farm as a maiden mare for $330,000 at Keeneland January the year prior. Washington Bridge is out of the listed-winning Stirling Bridge (Prized), who has also produced the multiple listed winner Jose Sea View (Badge Of Silver). The third dam is the GIII Suwannee River H. scorer Early Lunch (Noble Table). Washington Bridge, who was offered at Keeneland November last year but led out unsold at $37,000, has a 2-year-old filly by Street Sense named West Love, a yearling full-sister to Mnasek and was bred to Liam's Map for 2021.

WATCH: Mnasek runs up the score in the UAE Oaks