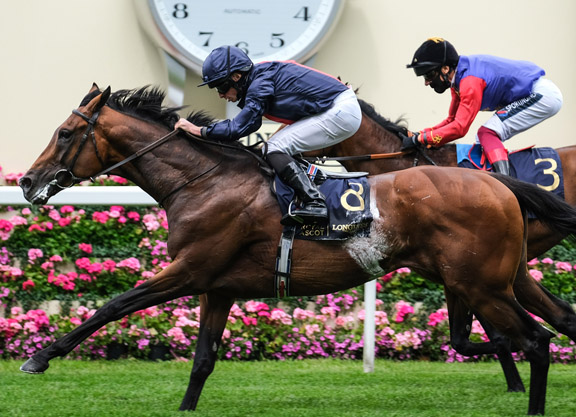 The second foal for his four-time Group 1-winning and dual Australian champion dam, Russian Emperor won the G3 Hampton Court S. at Royal Ascot last June for Ballydoyle, but struggled home seventh in the G1 Investec Derby. His first two local runs lacked any spark, but the entire sprung to life in his final prep, has drawn well and is a live chance.

Former 'TDN Rising Star' Monarch of Egypt sneaks into the Derby field off a lofty rating upon import. Competitive against the likes of Siskin (First Defence) at two, including a runner-up effort in the G1 Keeneland Phoenix S., the $750,000 Keeneland September grad wasn't a factor in the G1 Irish 2000 Guineas, but was a smart runner-up in the G3 Jersey S. at Royal Ascot. Drawn the parking lot and stretching out for this, the task at hand is very tall. (Click here for a feature on Congratulation)

A €50,000 purchase out of the 2019 Tattersalls Ireland Goresbridge Breeze-Up, the former Now The King was a Dundalk maiden winner in three runs for trainer Michael O'Callaghan at two before being sold on. His three wins in Hong Kong–including a debut victory at 59-1–have all come at Happy Valley and he was no factor against many of these last month.

Bought in for €32,000 as an Arqana August Yearling, the former Chares bolted up by a combined 12 1/2 in his first two career starts for trainer Christophe Ferland and added the Listed Criterium de Lyon in September 2019 before being purchased for €710,000 by Lohan Equine/Narvick International at that year's Arqana Arc Sale. Victorious in the 'Road to the Kentucky Derby' conditions stakes in a single appearance for Jane Chapple-Hyam, Maximus has a pair of minor placings from five local runs.

Sports a very similar profile to Maximus, as he was conditioned by Christophe Ferland to three wins from four starts, including the Listed Prix Maurice Caillault over the Chantilly fibresand last March. A €110,000 ARQAUG purchase who was unsold at that same price as an ARQMAY breezer, the former Waltham has yet to taste local success in five trips postward, but looms an interesting each-way play this weekend nonetheless.