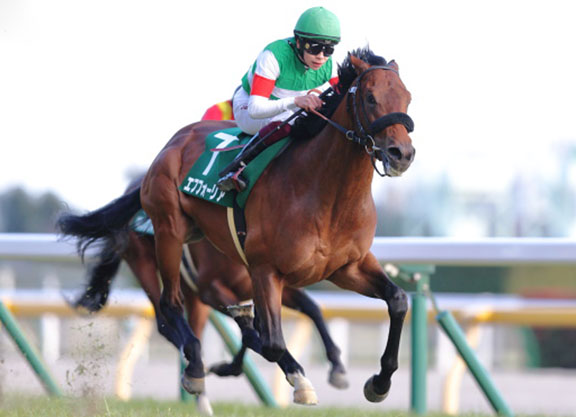 Efforia (Jpn) (Epiphaneia {Jpn}) will look to take his career mark to a perfect four-from-four and will attempt to give the Carrot Farm syndicate a second victory in three years in the G1 Satsuki Sho (Japanese 2000 Guineas) over the metric 10 furlongs Sunday afternoon at Nakayama Racecourse.

Descending from the family of G1 Japan Cup hero Admire Mooon (Jpn) (End Sweep) and champion Hishi Amazon (Theatrical {Ire}), Efforia made a successful debut over a right-handed 2000-metre trip at Sapporo last August and made it two straight with a Tokyo allowance in November. He has one prep run under his belt this season, a handy defeat of Victipharus (Jpn) (Heart's Cry {Jpn}) in the G3 Kyodo News Hai (1800m) at headquarters Feb. 14 and is primed for his first Group 1 test.

“As a 2-year-old, physically and mentally he was a little weak, and his hindquarters weren't so strong, so it took him a bit of time to recover from races,” said trainer Yuichi Shikato. “Over time though, he's developed well and has become a lot stronger. He's been working uphill recently and has trained as I would have liked.”

Saturnalia (Jpn) (Lord Kanaloa {Jpn}) won the 2019 Satsuki Sho in Carrot Farm's green-and-white colours and Admire Hader (Jpn) can give Lord Kanaloa his second winner in three years. Once-beaten from four starts to date, the Junko Kondo runner was a bit out of his comfort zone when closer to the pace than he prefers in a 2000-metre Hanshin allowance in December, but nevertheless held sway to best Deep Monster (Jpn) (Deep Impact {Jpn}) by a cosy half-length. He was a bit farther off the speed in the Listed Wakaba S. (2000m) last time Mar. 20 and showed sharp acceleration to defeat Chevalier Rose (Jpn) (Deep Impact {Jpn}) by a decisive three-length margin. Admire Hader is the choice of Christophe Lemaire.

Danon the Kid (Jpn) (Just a Way {Jpn}) clinched the 2-year-old championship with a workmanlike success in the G1 Hopeful S. over this course and distance on Boxing Day, but there were no visible excuses when only third to front-running Titleholder (Jpn) (Duramente {Jpn}) in the G2 Hochi Hai Yayoi Sho (2000m) at this venue Mar. 7.

Yoho Lake (Jpn) (Deep Impact {Jpn}) has proved he can run with these, but is a big price in ante-post markets at 30-1. Third and running-on in the Hopeful S., he was flushed extremely wide into the lane in the G3 Kisaragi Sho at Chukyo Feb. 7 and fell just a neck short of Lagom (Jpn) (Orfevre {Jpn}), who re-opposes here at about a third of the price of Yoho Lake.