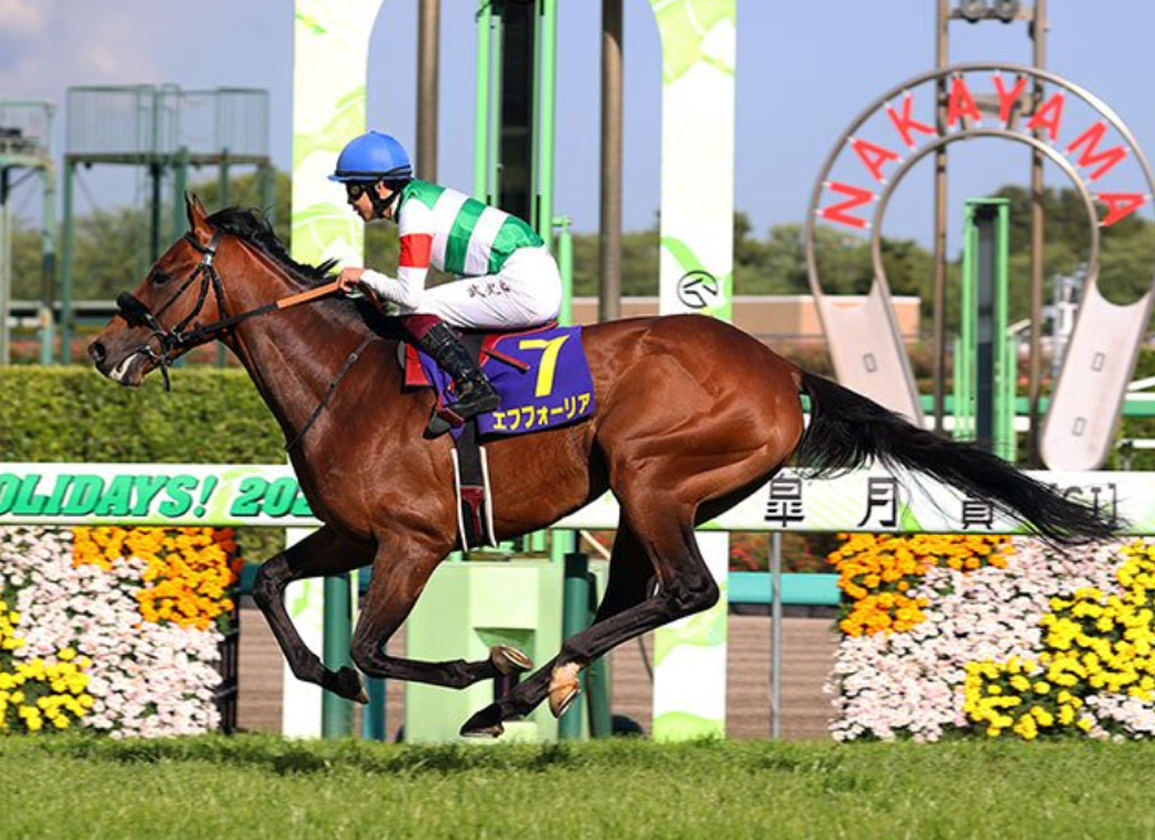 Perfect in four career attempts to this point, including a facile success in the G1 Satsuki Sho (Japanese 2000 Guineas) (2000mT) last month, Carrot Farm's Efforia (Jpn) (Epiphaneia {Jpn}) will jump a warm favourite to take his winning streak to five in Sunday's G1 Tokyo Yushun (Japanese Derby) at the Fuchu Racecourse in the Japanese capitol.

Blessed with excellent tactical speed, Efforia has managed to be a forward factor in each of his races to date, sitting fairly handy to the pace when besting Victipharus (Jpn) (Heart's Cry {Jpn}) by a comfortable 2 1/2 lengths in the G3 Kyodo News Hai at headquarters in February, an effort that stamped him as the second-elect for the Satsuki Sho. While Danon the Kid (Jpn) (Just a Way {Jpn}) faltered that afternoon, Efforia sat a cosy inside trip and punched through the gap when it came before streaking home a three-length winner from pace-pressing Titleholder (Jpn) (Duramente {Jpn}). Having drawn the paint for the Derby, Efforia should once again enjoy the run of the race Sunday.

“He hasn't dropped his condition since the Satsuki Sho and he's in good shape,” said young jockey Takeshi Yokoyama. “He seems to have become stronger. In his last work, he finished off very well and kept things going until after the winning post, demonstrating his ability. It would be great if I could win the Derby with him.”

Satono Reinas (Jpn) (Deep Impact {Jpn}) will attempt to become the first filly to beat the boys in the Derby since Vodka (Jpn) (Tanino Gimlet {Jpn}) in 2007 and should she succeed, would provide her legendary sire with a fourth straight winner of the race. Winner of her first two tries, including a newcomers' event in June, the bay was nosed out by Sodashi (Jpn) (Kurofune) in the G1 Hanshin Juvenile Fillies in December and flew home in her lone start this term to miss by a neck to the white filly in the G1 Oka Sho (Japanese 1000 Guineas) Apr. 11. She is certain to appreciate this stretch out to the metric 12 furlongs, having passed last week's G1 Yushun Himba.

“I think she'll actually be better suited to this longer trip,” said trainer Sakae Kunieda, who conditioned the great Almond Eye (Jpn) (Lord Kanaloa {Jpn}). “I'm excited about the challenge she faces here, and I'm not really thinking about the opponents in the race, but only her performance under these conditions.”

Wonderful Town (Jpn) (Rulership {Jpn}) rallied from off the speed to best Lagom (Jpn) (Orfevre {Jpn}) in the G3 Kyoto Nisai S. last November and resumed from a November layoff to win the G2 Aoba Sho over Sunday's course and distance May 1. A victory would give Deep Impact his first Derby winner as a broodmare sire and second overall, joining Kikuka Sho hero Kiseki (Jpn), also a son of Rulership.

Deep Monster (Jpn) (Deep Impact {Jpn}) looms an interesting longshot proposition. A listed winner over 2200 metres in late February, the son of US MGISW Sisterly Love (Bellamy Road) raced last but one into the final half-mile of the Guineas, was flushed seven or eight wide into the lane and finished up willingly to be seventh, beaten 4 1/2 lengths. He's drawn nicely in four to save some ground this time and the longer trip and, potentially, sounder underfoot conditions could help his chances.