East vs. West in American Oaks 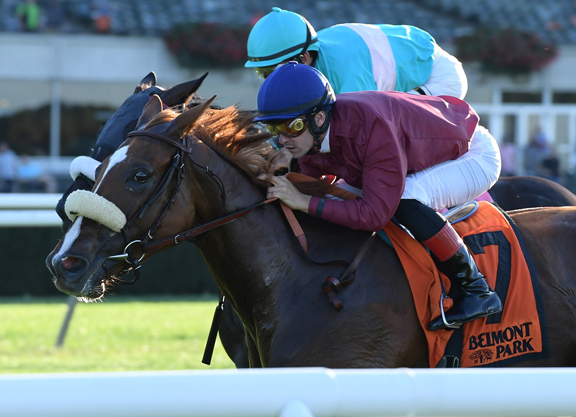 An intriguing cast of locally based runners and East Coast invaders will square off in Saturday's GI American Oaks at Santa Anita. Alice Bamford homebred Californiagoldrush (Cape Blanco {Ire}) took the first two starts of her career locally before checking in third in the GI Del Mar Oaks Aug. 18. She made the reverse journey to Belmont to annex the GII Sands Point S. over yielding sod Sept. 15 and will be looking to provide Hall of Famer Neil Drysdale with a first American Oaks trophy.

Paved (Quality Road) also merits consideration among California contingent mostly due to the strength of her second-place finish over this course and 10-furlong distance when facing her elders in the GI Rodeo Drive S. Sept. 29. The winner was Vasilika (Skipshot), who was taking her seventh of eight straight that day. Paved also boasts a convincing victory in the GII Honeymoon S. here in June, but is looking to bounce back from a 12th-place run in the much-tougher GI Breeders' Cup F/M Turf Nov. 3.

Amandine (GB) (Shamardal) is now two-for-two in the States after an impressive score in the Lady of Shamrock S. here Wednesday. Trainer Jeff Mullins told TDN's Bill Finley Friday that a decision about wheeling back on short rest likely wouldn't be made until raceday.

Colonia (Fr) (Champs Elysees {GB}) was extremely impressive going last to first in her Stateside debut in Arlington's Hatoof S. in July, but she settled for fifth and third, respectively, behind Californiagoldrush in the Del Mark Oaks and Sands Point. She returned to winning ways in Keeneland's Oct. 19 GIII Pin Oak Valley View S. after weaving her way through horses and then avoiding a foe who crashed into the rail.

Chad Brown will look to check another Grade I off his ever-shrinking career checklist with Competitionofideas (Speightstown). A $325,000 KEESEP yearling, the relatively under-the-radar runner paired up maiden and first-level allowance wins at Belmont before finishing a late-on-the-scene third in the rained-off Winter Memories S. going a one-turn mile at Aqueduct Nov. 22. Brown teamed up with pilot Joel Rosario earlier this month at Del Mar to annex both the GI Hollywood Derby and GI Matriarch S., and he sent out fellow Klaravich Stables colorbearer Identity Politics (Into Mischief) to a runner-up finish in the GI Malibu S. here on opening day Wednesday.