Dutch Art's Starman On Top in the Duke of York 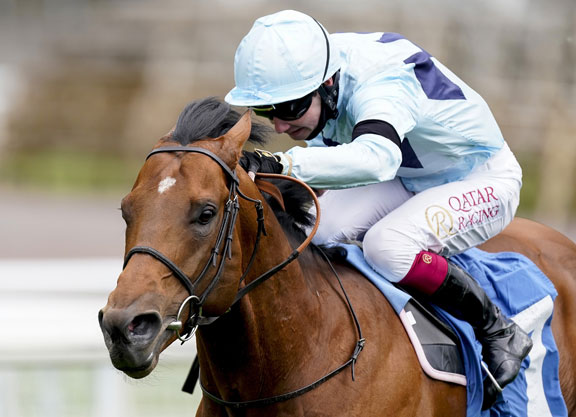 David Ward's homebred Starman (GB) (Dutch Art {GB}) posted a third straight career victory in September's Listed Garrowby S. over six furlongs at York and was under seven lengths adrift when confronted with testing conditions and losing his unbeaten record with a 14th in Ascot's Oct. 17 G1 British Champions Sprint. Sent postward for Wednesday's G2 Duke of York Clipper Logistics S. back at the Knavesmire venue for his seasonal return, the 4-year-old bay reached a new standard by defeating a swathe of seasoned sprinters in the six-furlong dash. Racing without cover in midfield through halfway, the 5-1 chance was nudged closer approaching the final quarter mile kept on strongly under a late drive once joining the leading wave at the eighth pole to post a lifetime best by a neck from Nahhaarr (Ire) (Dark Angel {Ire}).

“Oisin [Murphy] said he got there a fraction early and wasn't doing a lot in front, but he front two look good horses,” said Ed Walker after claiming a first domestic Group 2 win. “Hopefully, off a stronger pace, he could be even better. We never thought he'd be this good as he was so big at two. We couldn't do a lot with him and Covid pushed his start back last year. He's done nothing wrong since then other than on bottomless ground at Ascot. There's cut in this ground today, but they've done an amazing job because the track is in great condition. It's very fair ground, but I think he'll be better on quick.”

Looking ahead to immediate targets, the trainer continued, “It's [Royal] Ascot next for the [G1] Diamond Jubilee. He is in the [G1] King's Stand and I thought maybe he could go for that if Battaash didn't make it, but I think it will be the Jubilee.”

Winning rider Oisin Murphy added, “I've ridden him a little at home and Ed always had a high opinion of him. He travelled well and looked really good today. He's very chilled out and is a very exciting horse. I didn't feel like I was stopping and the second is a horse who finds plenty for pressure. It will be interesting to watch the replay to see if the pack were closing. He's been placed very well and connections are reaping the rewards now.”