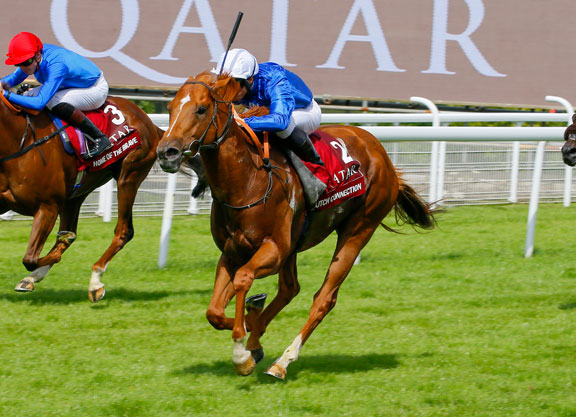 So often second on the big occasion, Dutch Connection was finally steered back into the winner's spot by the thriving talent James McDonald to justify favouritism racing under his ideal conditions. The last time the chestnut had a fast-ground seven furlongs was when winning the G3 Jersey S. at Royal Ascot last June, which confirmed the impression he had earlier given when winning the G3 Acomb S. at York and finishing third in The Curragh's G1 Vincent O'Brien National S. Subsequently runner-up in the G1 Prix Jean Prat at Chantilly and in this race when it was staged on rain-softened ground 12 months ago, he was again denied a fast surface when fifth in Keeneland's GI Shadwell Turf Mile in October. Returning to be second in the Apr. 22 G2 Sandown Mile, Dutch Connection dropped to ninth in the G1 Lockinge S. at Newbury May 14 with the rain seeming to follow him around.

Also in that position behind Mutakayyef (GB) (Sea the Stars {Ire}) in Ascot's G2 Summer Mile last time July 9, he received the perfect early lead from the positively-ridden Gifted Master here and sauntered along in fourth. Cruising out wide as that front-runner's stablemate Home of the Brave was committed with just over a furlong remaining, Dutch Connection was allowed a breather before being set alight and swooped to the front 100 yards later and on to a comprehensive win. “He's awesome and I can't believe I've won a big race for Charlie Hills, who is an absolute brother of mine and he's had so much faith in me,” McDonald said after yet another masterclass this summer. “I'm going home on Saturday, so I'm making the most of my opportunities and hopefully I get a couple more.”

Charlie Hills is looking at some major targets now. “We'll have to speak to John Ferguson and Sheikh Mohammed to see where we go,” he said. There's an option for him in Saratoga, maybe the [G1] Prix Maurice de Gheest [at Deauville Aug. 7] in France as well. He's pretty versatile with trip and fast ground is really the key for him. He's a fine, big horse who should improve as he gets older.” Of the jockey, he was keen to pay tribute. “I think [James] is a world-class jockey and still very young, so I think we're going to see him here quite a bit,” he added. “The first morning James came down to ride, dad asked me who he was and he said 'I haven't seen a jockey like that since Steve Cauthen was on these gallops', so that's a high accolade.” Hugo Palmer said of the second and third, “I'm frustrated and disappointed at the same time. James Doyle said Home Of The Brave never settled and ran with the choke out all the way. When you're training a horse to lead for three years, it's hard changing modus operandi. He showed what a good horse he is and there's certainly a Group Two in him, and possibly a Group One if we go abroad. Gifted Master gets a mile very well and I'm delighted they've both run well. I'll never run them against each other again, unless they twist my arm to do so. We'll try to keep them apart.”