Due to COVID-19 Restrictions, Woodbine's Opening Day is in Jeopardy 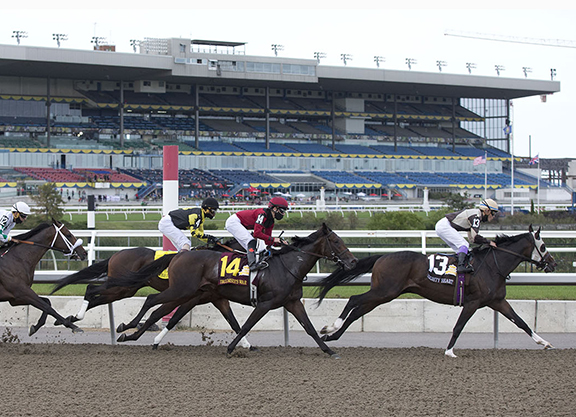 With less than a month to go before the scheduled opener on Apr. 17, Woodbine is facing the distinct possibility that it will be unable to operate next month due to COVID-19 protocols in place in Ontario. Woodbine is in an area currently designated as a Grey Zone, where horse racing is among the activities that are not allowed. Last year, the track was forced to end its meet two weeks early because of the same restrictions now threatening the April opener.

“I am really starting to get concerned,” Woodbine CEO Jim Lawson said.

A harness racing meet is currently being conducted at nearby Mohawk Park and Fort Erie, set to open June 1, will also be able to operate. Both are located in zones where there are fewer restrictions. The Woodbine backstretch is open and horses are permitted to train.

Should Woodbine not be allowed to open on time, it would become the only North American racetrack closed for racing due to the pandemic.

Last week, Lawson sent a letter to Toronto Mayor John Tory and the city's medical health officer asking for their help. On Monday, he said he was planning to spend most of the day on the phone, reaching out to anyone in government that might be able to push the provincial government into ending the restriction on racing.

To anyone who will listen, Lawson tells the same story–that there is no practical reason why Woodbine should remain closed for racing and shutting it down will mean the loss of thousands of jobs.

Much of Lawson's frustration stems from an exemption given to the National Hockey League. The Toronto Maple Leafs, who play at the Scotiabank Arena, which is in the same zone as Woodbine, have been able to hold all their regularly scheduled games, albeit without fans.

“This is really frustrating,” Lawson said. “We keep making the argument that how can you let hockey, an indoor activity, go on and close racing, an outdoor activity, down?”

Despite the pandemic, Woodbine was allowed to operate for much of 2020. Lawson said that during that entire time there was only one known case of Coronavirus among frontside and backstretch workers.

“Our safety record was almost perfect,” he said.

There are currently about 1,200 horses on the Woodbine backstretch and the horse population will get up to 2,000 after the meet is underway. Lawson said his biggest fear is that some of the horsemen who have yet to arrive for the meet will make plans to race elsewhere.

“What really concerns me is that we have three or four major trainers who have been calling me and saying, 'Hey, should I come?' Once we lose those trainers, I'm not sure that they will come back,” he said. “That would really hurt us if some of these trainers don't come back. The government doesn't get that and I'm not so sure they are concerned.”

Should the government decided to upgrade the area around Woodbine into a zone with fewer restrictions, then the track will be fine. But Lawson isn't going to sit back and wait for that to happen.

“I am very concerned and this is about to become a crisis for us,” he said. “It's a crisis because soon there will be 2,000 people back there looking after these horses. If these people lose their jobs, there's nothing else that they can do. Especially after I had heard from trainers that may not come back, I am trying to impress upon people that we are on the cusp of a very big problem that could do irreparable damage to us as a business. We will need some answers very soon as to whether or not we can make an Apr. 17 opener.”