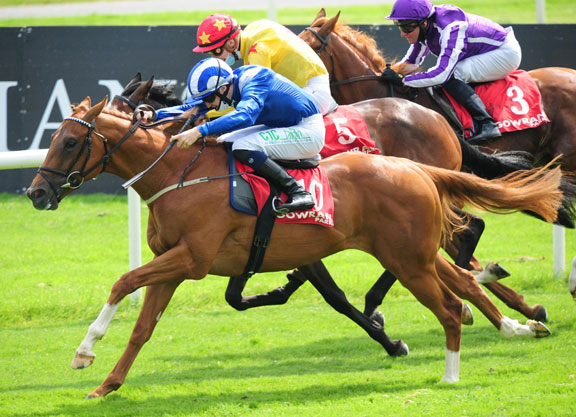 Introduced in Gowran Park’s Irish Stallion Farms EBF Maiden over a mile on Wednesday, Shadwell’s Wuqood (GB) (Dubawi {Ire}) overcame a wide draw and some smart rivals to earn TDN Rising Star status on debut. Sent off at 12-1, the homebred son of the G2 Blandford S. winner and G1 Epsom Oaks runner-up Tarfasha (Ire) (Teofilo {Ire}) was denied cover the whole way but raced like a true professional in fifth under Oisin Orr. Delivered to gain a narrow lead with a furlong remaining, the chestnut toughed it out to record a a short-head verdict over the Joseph O’Brien-trained fellow newcomer Liffey River (Fr) (Lope De Vega {Ire}), a full-brother to Lope Y Fernandez (Ire), with Ballydoyle’s 4-7 favourite Harvard (Ire) (Galileo {Ire}), the half-brother to the GI Breeders’ Cup Mile and G1 Queen Anne S. heroine Tepin (Bernstein), 1 1/4 lengths behind in third. “He’s been showing a nice bit at home, but really smartened up here,” the winning rider said of the half-brother to the listed winner Rakan (GB) (Sea the Stars {Ire}), who runs in Friday’s G3 Royal Whip. “He’s a big baby and was only doing enough in front. With every bit of work, he’s been improving and is a laid-back sort who saves his best for the track like his half-brother. I think he’ll stay a bit further in time and is going to improve a lot from today.”

Tarfasha was denied a winning debut by a neck back in 2013 and went from strength to strength thereafter, winning the following season’s G3 Blue Wind S., finishing nearest to the operation’s star Taghrooda (GB) (Sea the Stars {Ire}) in the Oaks and beating Chicquita (Ire) (Montjeu {Ire}) in the Blandford. Her first foal, the aforementioned Rakan, was tried in last year’s G1 Irish Derby by this trainer having won the Listed King George V Cup and Dermot’s son Kris Weld was on hand to give the lowdown afterwards. “He’s a beautifully-bred colt. His dam was second in the Oaks and won the Blandford and hopefully he will be an exciting horse for next year,” he said. “We’ll probably give him one more run this year in a group race. He’s still very green, but I thought it was a nice performance.”

Tarfasha is a half-sister to four black-type performers including the classy stayer Saddler’s Rock (Ire) (Sadler’s Wells), who was successful in the G2 Doncaster Cup and G2 Goodwood Cup and was third in the G1 Gold Cup and G1 Irish St Leger, and the G1 Irish Derby, G1 Epsom Derby and G1 St Leger-placed Galileo Rock (Ire) (Galileo {Ire}). Her Ballymacoll family features the G1 Epsom Derby hero North Light (Ire) (Danehill), the G1 Grand Prix de Saint-Cloud scorer Gamut (Ire) (Spectrum {Ire}) and Tannery (Ire) (Dylan Thomas {Ire}) who captured the GI E. P. Taylor S. and GII Sheepshead Bay S. and was placed in the GI Flower Bowl Invitational and GI Garden City S. Next up from the dam is a yearling filly by Muhaarar (GB), while she also has a colt foal by Rakan’s sire Sea the Stars.