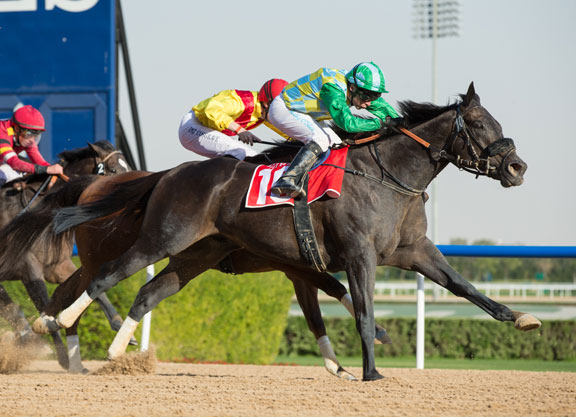 There was a surprise result in Super Saturday's opening group race, the G3 Mahab Al Shimaal over six furlongs, when the Satish Seemar-trained Wafy (Ire) (Dubawi {Ire}) came from way off the pace to deny stablemate and fellow longshot Leading Spirit (Ire) (Exceed And Excel {Aus}). The Tadhg O'Shea-ridden winner looked a forlorn hope early in the straight but the hectic gallop set by the pacesetters early on began to take its toll as the closers emerged from the pack late in the race. Leading Spirit looked the likely winner a furlong out having taken over from the Seemar-trained favourite Bochart (GB) (Dubawi {Ire}) and Alkaraama (War Front) at the top of the stretch, but the eye was drawn to the green silks of Nasir Askar as Wafy's stamina began to kick in and he eventually collared the runner-up by three-quarters of a length. The Doug O'Neill-trained Fight On (Into Mischief) also finished strongly to grab the third spot.

“I wasn't overly confident during the race; it's only his second run in a sprint and he is still learning how to race,” Tadgh O'Shea said post-race. “They went fast early but when I got in the clear he really rattled home. I hold him in high regard and while he was pitched in deep here he didn't let us down. He is a very well-bred horse and I think with more racing there will be more to come from him.”

It was a quick double for Satish Seemar, who won the opening Al Bastakiya and the trainer was keen to pass on a lot of credit to the owner, who purchased Wafy for 57,000gns at Tattersalls last October. “All the credit to Nasir Askar, he bought him and it was a smart purchase,” Seemar said. “He was showing talent at home but there was no guarantee he would handle the dirt, but he obviously proved that he was adaptable when he won at Jebel Ali last month. We always thought highly of him; he's had some niggling problems in the past but thankfully they seem to be behind him now. He is also by a great sire; you can never write off a Dubawi, he is an amazing stallion.”

Wafy was indeed a smart buy and has already repaid his owner in spades having won his only two starts for new connections since debuting for Satish Seemar at Jebel Ali on Feb. 21. The 5-year-old gelding was previously trained by Charlie Hills for Shadwell and despite only posting one victory in a Sandown conditions event as a 2-year-old, he was a consistent enough performer without necessarily having a progressive profile. Having finished second to the smart Duckett's Grove (Point Of Entry) over 10 furlongs at Ascot last year, Wafy will not be short of options over a range of trips in future.

Bred by Shadwell Estate, Wafy is the first black-type winner produced so far by the brilliant Ghanaati (Giant's Causeway), who won both the G1 1000 Guineas and the G1 Coronation S. in 2009. While the mare has yet to produce a horse of her own calibre, each of her five foals of racing age have won and she has a 2-year-old colt by Invincible Spirit (Ire) to represent her this year. Wafy is a grandson of the stakes winner Sarayir (Mr Prospector), whose seven winners from 10 runners include the G3 Cumberland Lodge S. winner Mawatheeq (Danzig) and the stakes winner and G1 Epsom Oaks third Rumoush (Rahy). Rumoush herself has become a fantastic producer being the dam of G3 Burj Nahaar winner Muntazah (GB) (Dubawi {Ire}), G3 City Of York S. winner Talayeb (GB) (Dansili {GB}) and stakes winner Wadilsafa (GB) (Frankel {GB}).