Dubawi's Master of the Seas Takes the Craven 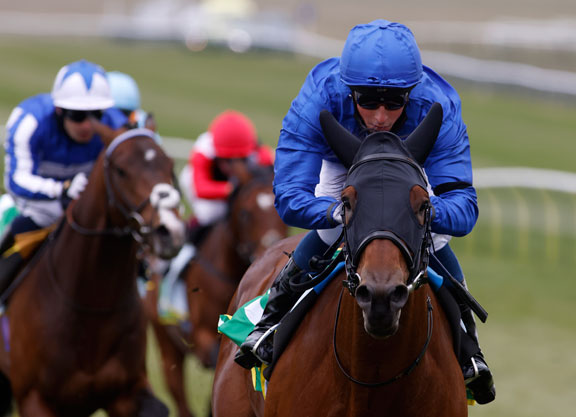 Master Of The Seas  | Racingfotos.com

Godolphin ruled the roost in Thursday's G3 Craven S. at Newmarket, with the Charlie Appleby duo Master of the Seas (Ire) (Dubawi {Ire}) and La Barrosa (Ire) (Lope de Vega {Ire}) coming home clear of their fellow 2000 Guineas hopefuls in the order the betting had suggested. Unsurprisingly, given his higher level of form at two, Master of the Seas had shaded it in the market as the 11-4 favourite with a first-time hood applied to temper the over-enthusiasm he had displayed when fourth in the G1 Vincent O'Brien National S. at The Curragh in September. With the headgear proving efficacious as the impressive G2 Superlative S. winner found just enough equilibrium in mid-division against the rail, William Buick's biggest problem became the lack of racing room before halfway and he needed to wait for those outside him to feel the pinch heading downhill. As La Barrosa went past the eventual third Mystery Smiles (Ire) (Mehmas {Ire}) approaching the furlong pole, Master of the Seas was surging on his other side and after gaining a slim advantage over his stablemate shortly after gradually extended it to 3/4 of a length at the line. Mystery Smiles was left three lengths behind by the telling burst of the front two. “That would have done the horse the world of good–he's relaxed and done everything right and quickened off a slow pace,” Buick said. “It turned out to be a messy race and the two class horses came to the fore. I think he's a Guineas horse–only the good ones quicken into the dip and pick up again up the rising ground.”

Master of the Seas, who had a fitness edge on all bar one of his rivals having finished runner-up to Wednesday's Listed European Free runner-up Naval Crown (GB) (Dubawi {Ire}) in the Feb. 25 Listed Meydan Classic, is heading to the May 1 Classic alongside the stable's G3 Autumn S. winner and G1 Futurity Trophy runner-up One Ruler (Ire) (Dubawi {Ire}). “It wasn't quite how we planned it,” Appleby said. “The plan was for La Barrosa to pop out and set a nice gallop and maybe come up the middle to give everyone racing room, but it didn't materialise. He ended up just over-racing, but he was a bit fresh as well. William had to ask him a few questions there, he had to go through the gears going into the dip which is hard for horses but he's very well-balanced. He picked up well and went through the line strong. The hood helped Master of the Seas settle and we'll probably keep it on for the Guineas. I've been very pleased with One Ruler's prep as well, so it's a nice position to be in to have two or three nice chances for the Guineas.”

Godolphin have benefitted greatly from the feedback from the listed-winning dam Firth of Lorne (Ire) (Danehill), who was runner-up in the G1 Poule d'Essai des Pouliches and third in the G3 Prix de la Grotte, GII San Gorgonio H. and GIII Cardinal H. Her third foal Etive (Elusive Quality) was also a listed scorer in Germany, while next up was Falls of Lora (Ire) (Street Cry {Ire}) who took the G3 UAE Oaks and Listed Distaff S. and was third in the G2 Cape Verdi. She is in turn the dam of Cascadian (GB) (New Approach {Ire}), who finished runner-up in the G1 Prix Jean Prat for the Andre Fabre stable and who was successful in Saturday's G1 Doncaster Mile under James Cummings.

Before Master of the Seas, Firth of Lorne's highest-achieving progeny was Latharnach (Iffraaj {GB}), who was runner-up in the G1 St James's Palace S. for this stable and third in the G3 Thoroughbred S., while she also threw the listed-placed Tipstaff (GB) by Falls of Lora's sire Street Cry. Like the G3 Prix de Seine-et-Oise third Shmoose (Ire) (Caerleon), she is a daughter of the G3 Cherry Hinton S. scorer and G1 1000 Guineas runner-up Kerrera (Ire) (Diesis {GB}) who is also the second dam of the G2 Premio Parioli (Italian 2000 Guineas) and G2 Mehl-Mulhens-Rennen (German 2000 Guineas) winner Dupont (GB) (Zafonic) and his full-brother and fellow sire Pacino (GB) who also took that German Classic and was runner-up in the G1 Sheikh Maktoum bin Rashid Al Maktoum Challenge Round 1. Also connected to the G2 Gimcrack S.-winning sire Rock City (Ire), Firth of Lorne's 2-year-old is a daughter of Ribchester (Ire) while she also has a yearling filly by Dark Angel (Ire).