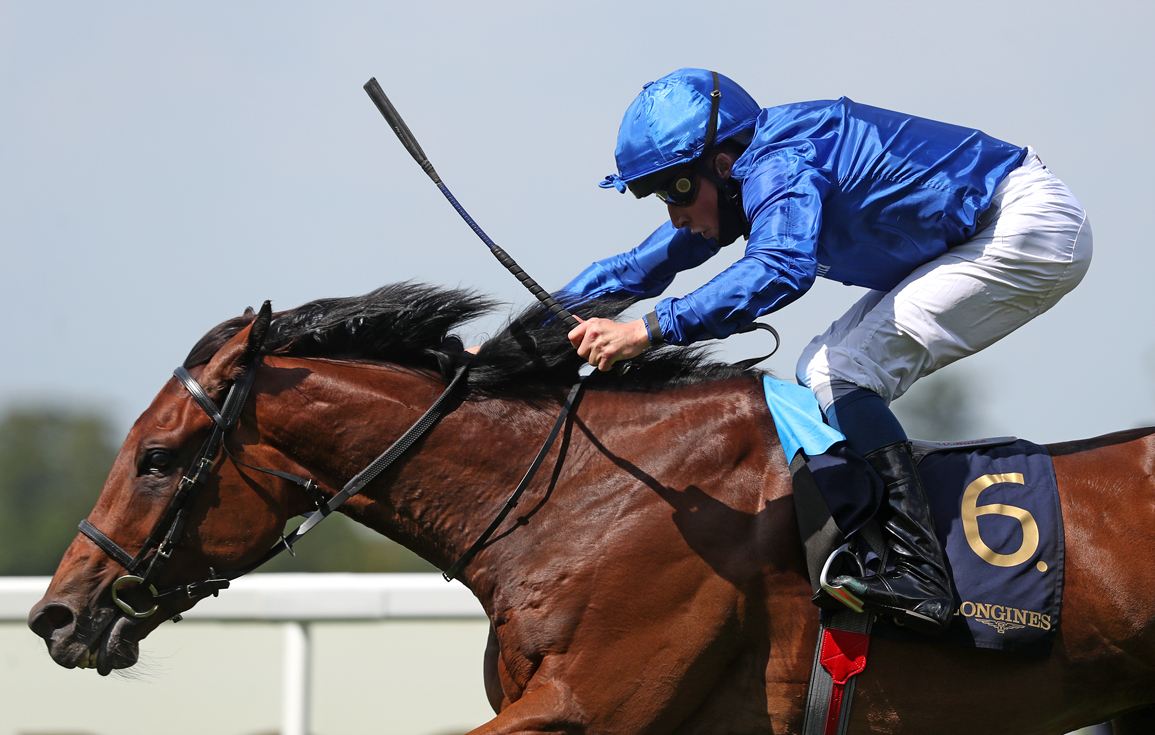 Charlie Appleby's 3-year-old males seem to have the edge in the middle-distance and staying department at present, with Kemari (GB) (Dubawi {Ire}) the latest to step forward and provide the outfit with its first Royal Ascot winner of 2021 in the G2 Queen's Vase. Stripped of one of its leading players at the start as Ballydoyle's Kyprios (Ire) (Galileo {Ire}) was withdrawn after going down in the stalls, this latest renewal of the 14-furlong test nevertheless had enough depth to ensure that the winner would emerge with suitable kudos. Kemari, who was four-lengths second on debut to Thursday's G3 Hampton Court S. protagonist Movin Time (GB) (Fastnet Rock {Aus}) in a 10-furlong maiden at Newmarket May 13, had earned this tilt when off the mark by six lengths next time over an extended 11 furlongs at Yarmouth May 28. Always travelling easily drafting behind the pace-setting fellow Godolphin runner Law of the Sea (GB) (Golden Horn {GB}), the bay who is gelded and therefore unable to contest the G1 St Leger had the gap heading to the two-furlong pole. Quickly through and into the clear, the 15-2 shot kept finding for William Buick despite drifting left and hit the line with 1 1/2 lengths to spare over the 10-3 favourite Wordsworth (Ire) (Galileo {Ire}). Stowell (GB) (Zoffany {Ire}) came from the rear to be 1 1/4 lengths further back in third.

“I must give the team at home a lot of credit for this–Kemari has been a challenging horse during the winter,” Appleby explained. “He was gelded and had his hood on for his first start, but full credit to them, they have done a great job. William praised Kemari highly after that win at Yarmouth. I have to say, I sat on the fence slightly and felt he was a horse who was progressing, but was he progressing quickly enough to be able to step up into today's league? He has proved me wrong and William right, which is the great thing about having a team such as we have got, we all put our opinions in and hopefully we get the right result. But the horse is definitely a horse who is going the right way.”

Appleby is looking at a potential crack at the Flemington showcase with Kemari and added, “I hope he will make up into a Cup horse for next year. As we all know, in the past few years three-year-olds in the Melbourne Cup have produced the goods. Whether he gets to that level, we will see, but we will enjoy today. We'll have the discussions with our principals and managers during the next few weeks and map the autumn out. He's got a profile that is working in that direction, anyway.”

William Buick added, “I had a nice draw and got a good position out of the gates. The pace took me to where I needed to be and he really quickened up well. It actually surprised me how well he quickened. He is learning on the job and I thought it was a good quality race.”

Kemari is the first of three foals out of Fittocks Stud's G3 St Simon S. scorer Koora (GB) (Pivotal {GB}), who emulated her dam Kithanga (Ire) (Darshaan {GB}) by winning that Newbury contest. Kithanga, who was also third in the G1 Irish St Leger, is best known as the dam of the G1 St Leger hero and sire Milan (GB) (Sadler's Wells) who was also runner-up in the GI Breeders' Cup Turf. His two full-sisters Kahara (GB) and Kibara (GB) both produced smart types, with the former responsible for the G2 German 2000 Guineas winner Karpino (Ger) (Cape Cross {Ire}) and the latter throwing the stakes winner Dubara (GB) also by Dubawi. Another of Kithanga's progeny is the G2 Great Voltigeur S. third Go For Gold (Ire) (Machiavellian), while this is also the family of the G1 Epsom and Irish Derby hero and leading sire Kahyasi (Ire), the G1 Irish St Leger heroine Kastoria (Ire) (Selkirk) and the G1 Yorkshire Oaks winner Key Change (Ire) by Kithanga's sire Darshaan. Koora's unraced 2-year-old is a full-brother to Kemari named Out From Under (GB), while she also has a yearling colt by Galileo (Ire) and a filly foal by Kingman (GB).