Dubawi's Creative Force Leads A Godolphin One-Two In the Jersey 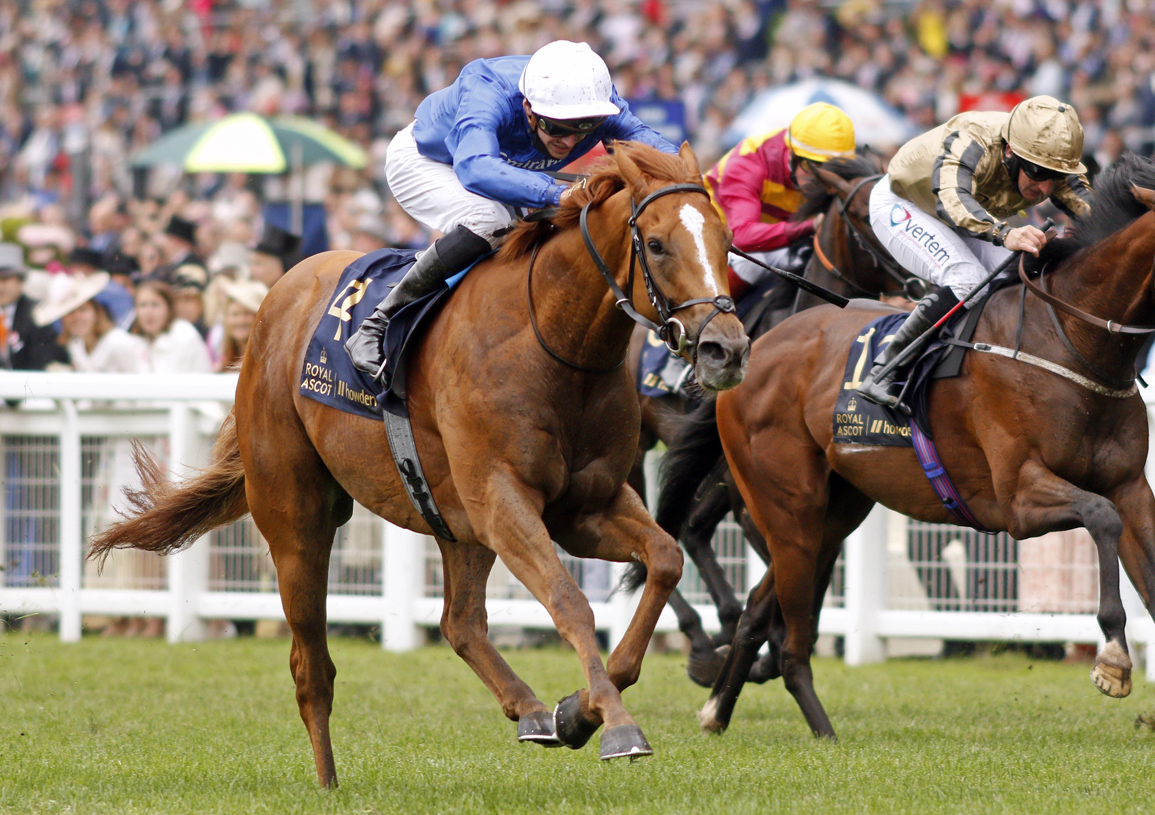 The betting suggested that there would be a Godolphin one-two in Saturday's G3 Jersey S. and that projection was right with Creative Force (Ire) (Dubawi {Ire}) and James Doyle upstaging Naval Crown (GB) (Dubawi {Ire}) and William Buick to win the battle of the 5-1 joint-favourites. Always travelling strongly restrained towards the rear of the group racing up the middle, the chestnut who captured the Listed Carnarvon S. over six furlongs at Newbury May 15 moved through to take control of that pack with 1 1/2 furlongs remaining. Drifting left as the opening race's winner Point Lonsdale (Ire) (Australia {GB}) had, Creative Force was nevertheless resilient to register a 1 1/4-length verdict over his stand's rail-running stablemate Naval Crown. The filly Vadream (GB) (Brazen Beau {Aus}) closed to be 3/4 of a length away in third. “He's a little star and a yard favourite,” Doyle said. “The race panned out pretty straightforward for me–they went a really nice pace and travelled strong throughout. I could have done with a target for a bit longer, but they were going well on the stand's side so I had to be brave and press on. We weren't 100% sure about his stamina, but the dam's side was pretty strong so we were hopeful it would carry him through and he's very tenacious and that helped. He was in front a long way out, which is not ideal at Ascot and he coped with the ground pretty well.”

At this point, Creative Force's sole defeat came when 10th in the G2 Coventry S. here last June, after which he was absent until his 3-year-old bow at Newmarket in a six-furlong handicap at the Craven meeting Apr. 15. Beating the subsequent Palace of Holyroodhouse S. winner Significantly (GB) (Garswood {GB}), the smart Jumby (Ire) (New Bay {GB}) and the G2 Sandy Lane S., G3 Pavilion S. and Wokingham H. winner Rohaan (Ire) (Mayson {GB}) there, he went back over the same course and distance to deny Thursday's Britannia H. winner Perotto (GB) (New Bay {GB}) on the 2000 Guineas card May 1. In the Carnarvon, it was the first time he had encountered ground softer than good and he relished it to win by three lengths, but this was a new challenge.
Charlie Appleby was registering his 11th Royal winner and said, “Both horses turned up in great order and full credit to the team. I worked them together probably about 10 days ago and said to Marie [Murphy] and Alex [Merriam], the assistants, 'we don't want to be doing that again' as they are both very genuine horses and it was a stronger piece of work than I ideally wanted. From William's point of view, he said to me 'Charlie, it is such a hard choice'–full credit to the lads, they've given both of them a great ride and it's obviously nice to come here and have a 1-2.”

“We were hopeful on Creative Force's pedigree, and what he has shown us at home in his attitude and the way he is finishing out in his gallops and his races, that stepping up to seven furlongs would be within his realm and he's gone and duly obliged today. I think we'll probably look at something like the [G1] Prix Maurice de Gheest [at Deauville Aug. 8] dropping back to six and a half. He's got bags of pace, travels well and picks up well, so I think that'll be a nice race there to suit his profile. Potentially, the likelihood is the same for Naval Crown–they might just have to take each other on again and see if we can reverse the form.”

Creative Force was no secret at the 2019 Goffs Orby Sale, selling for €400,000 as the son of the Listed Fairy Bridge S. winner and G2 Blandford S.-placed Choose Me (Ire) (Choisir {Aus}) whose previous best was the G1 Queen Elizabeth II S. heroine Persuasive (Ire) (Dark Angel {Ire}). Also responsible for the Listed Distaff S. winner and G3 Prix de Lieurey runner-up Tisbutadream (Ire) (Dream Ahead), Choose Me is kin to the Listed Waterford Testimonial S. winner Shanghai Glory (Ire) (Exceed and Excel {Aus}), while the third dam Ajuga (The Minstrel) was responsible for the G2 EuropaChampionat winner Bad Bertrich Again (Ire) (Dowsing) and the Listed Cheshire Oaks winner Alumni (GB) (Selkirk). The latter is in turn the dam of the Czech champion Dux Scholar (GB) (Oasis Dream {GB}) who was runner-up in the G2 Prix Daniel Wildenstein and G2 Oettingen-Rennen. The fourth dam is the G1 Irish 1000 Guineas and G1 Champion S. heroine Cairn Rouge (Ire) (Pitcairn {Ire}), whose descendants include the prolific grade I-winning Ventura (Chester House). Next up from the dam is the unraced 2-year-old full-brother to Persuasive named Mr Zero (Ire). He was a 100,000gns purchase by SackvilleDonald at the Tattersalls October Yearling Sale Book 1.