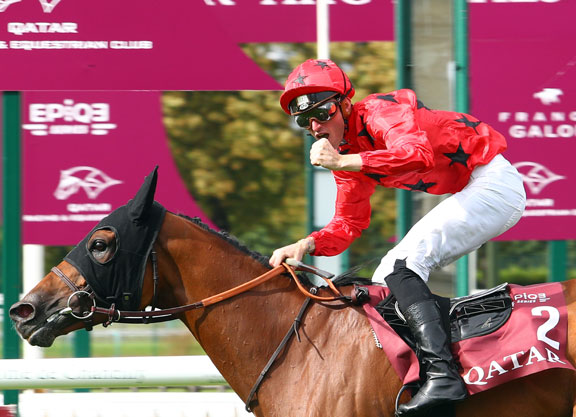 Steadily progressive throughout her career, Bateel had been creeping ever closer to a first top-level success and with every drop of rain that came to Chantilly her prospects of achieving that grew exponentially. Cultivated early by David Simcock, the bay took advantage of soft ground when capturing the Listed Fred Archer S. over this trip at Newmarket last June but was denied that surface on her next two starts when fifth in Deauville's 10-furlong G1 Prix Jean Romanet in August and when last of 13 in the G1 British Champions Fillies & Mares S. back over 12 furlongs at Ascot in October. Tried over 15 furlongs for her debut for the Francis-Henri Graffard stable in the G3 Prix de Barbeville here Apr. 30, she put up a satisfactory comeback effort when second before heading to Haydock for the June 10 G3 Pinnacle S. Granted soft going for the first time since the Fred Archer and re-fitted with the hood she had sported for the first time when opening her black-type account in that, she toyed with some smart rivals including the subsequent Jean Romanet winner Ajman Princess (Ire) (Teofilo {Ire}) but the ground was much quicker at Deauville as she stepped out for the G2 Prix de Pomone last time Aug. 6.

In winning that contest despite the conditions, Bateel showed she was maturing into an all-round top-class mare and with soft ground underfoot once again she was always going to take another step forward. Always travelling strongly in mid-division under a confident Pierre-Charles Boudot as Ajman Princess took no prisoners up ahead, she was involved in some scrimmaging turning out of the back straight which compromised the G1 Nassau S. runner-up Blond Me (Ire) (Tamayuz {GB}) and led to an inquiry. Following the smooth-travelling Journey as George Strawbridge's homebred towed her into contention, she came under a ride before that rival but took her measure with just over 300 metres remaining. Asserting as Journey's game efforts took their toll, she emerged clear-best at the line with the three-length margin back to last year's winner Left Hand giving the form some gravitas.

For trainer Francis-Henri Graffard, the win took on an extra dimension in a race that holds a special place in his family history. “It was in this race in 1955 that my grandfather Docteur Henri Champliau won with the filly he owned, Wild Miss,” he explained. “It has always been in my mind that I would like to win it myself, so I am very happy. This filly was sent to me in order to try and win a group 1 race with there being more opportunities on soft ground in France and she has gone from strength to strength. Today there was no pressure before the race, but I knew conditions were right and she received a perfect ride.” What happens with Bateel from here is unknown, but her trainer is understandably not afraid to aim high. “When the entries for the Arc were made, she was not even a group 3 winner so I have no regrets about not putting her in,” he said. “She needs to run fresh, so we'll see as it is only three weeks away but we will not be afraid to supplement her if we think it is right for her. We'll wait and see, as she also has Ascot's [Oct. 21 G1 Qipco British Champions] Fillies & Mares.” Journey came out of the race with great credit as she is geared towards a repeat bid in the Fillies & Mares at Ascot and jockey Frankie Dettori commented, “She has run very well and she was beaten by a filly who handled the ground better than her.”