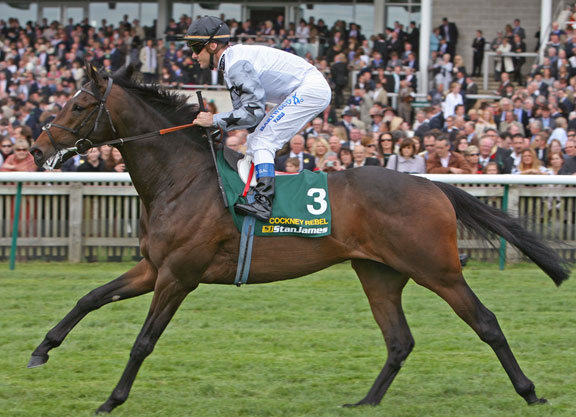 Cockney Rebel going to post in the Guineas | Racingfotos.com

“It is with great sadness that I advise the death of Cockney rebel this afternoon,” Cunningham tweeted. “He gave myself, my family and all of those connected with him such great memories that I could only have ever dreamed of. The horse of a lifetime, you changed my life.”

Bred by Oak Lodge Bloodstock, the March-foaled bay was a 14,286gns weanling at Tattersalls November before bringing £30,000 as a Doncaster September yearling. Put into training with Geoff Huffer, he broke his maiden at first asking in July of his juvenile year and ran second at York later that summer. Cockney Rebel signed off his 2-year-old year with a third in the G2 Champagne S., but resumed in 2007 with a victory in the G1 2000 Guineas. After winning the Irish equivalent later in May, his final start was a fifth in the G1 St James's Palace S. at Royal Ascot. He was retired with a mark of 6-3-1-1 and $885,544 in earnings.

Standing at the National Stud from 2008 to 2013, he moved to Haras de Saint Arnoult in France for two seasons in 2014/15 and then Haras du Thenney from 2016-2018. He returned to Great Britain in 2019 to stand at Batsford Stud and stood for £1,000 there this season. His best runner was G3 Fred Darling S. hero Redstart (GB), while he also sired French listed winner Monette (Fr), who was third in the GIII Matron S. Stateside.