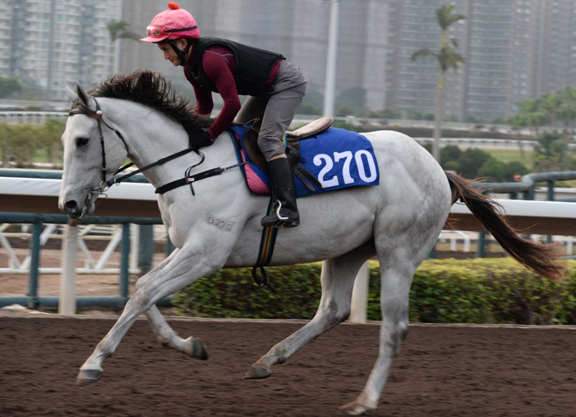 A pair of American-bred 3-year-olds are among a field of six entered for Sunday's Yau Ma Tei Plate, the season's first race restricted to 'griffins' going the 1000-meter trip down the straight course at Sha Tin Racecourse. A griffin is defined as a 2-year-old or 3-year-old horse which has been imported into Hong Kong without having raced previously.

The better-fancied of the two colts, each trained by second-leading and BMW Hong Kong Derby-winning conditioner Francis Lui, is Sunny Star (Flatter), who was trading overnight as the 19-5 third choice. Bred in Kentucky by Esther de Jong, the Jan. 30 foal is a half-brother to New Jersey-bred Grade III winner Golden Brown (Offlee Wild) and fetched $90,000 from the Brookdale Farm consigment as a Keeneland November weanling in 2017. Led out unsold on a bid of $40,000 at Fasig-Tipton October in 2018, the dark bay fetched 55,000gns ($75,635) from Dwayne Woods at last year's Tattersalls Craven Breeze-Up (under-tack video). Sunny Star, a son of Suzee Sunrise (Chester House), has drawn gate five and is the selection of the in-form Vincent Ho, who rode Golden Sixty (Aus) (Medaglia d'Oro) to victory in the Derby for the Lui stable Mar. 22.

Chancheng Prince (Carpe Diem) has landed gate one–furthest from the grandstand–for his debut and was the second-longest price on the board ante-post. The gray colt is the third to make the races from his dam Bliss (Flashy Bull), herself a $190,000 Keeneland September yearling and winner of half of her eight trips to the post for earnings north of $150,000. An Apr. 20 foal, Chancheng Prince is bred by Torie Gladwell's Mystic Bloodstock and was sold to owner Raymond Kuah for $150,000 after breezing a quarter-mile in :21.1 at the 2019 OBS April Sale. He was sold by Top Line Sales, the consignment run by Gladwell and her husband Jimbo.