Drop the Chalupa Ahead of Schedule for Ellis 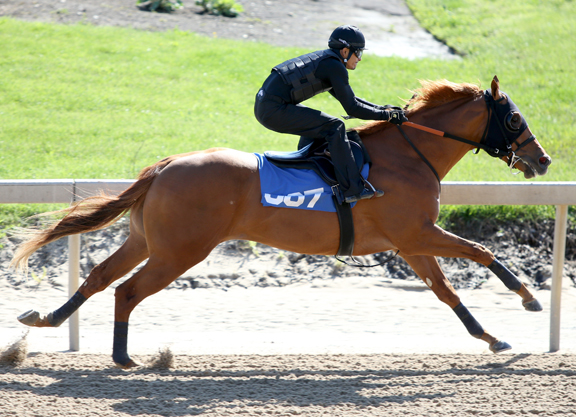 Drop the Chalupa working in Timonium | Photos by Z

When Ron Ellis sent the quirkily named Drop the Chalupa (Liam’s Map) out for his first start earlier this month, the trainer admitted he had modest expectations for the 16-1 longshot. After all the gelding, who Ellis had purchased for $35,000 on behalf of Richard Templer’s Doubledown Stables at the 2019 Fasig-Tipton Midlantic May sale, was up against a pair of well-respected runners from the power-packed Bob Baffert barn in the 6 1/2-furlong special weight.

“I liked him and I knew he had talent,” Ellis said of Drop the Chalupa. “But Baffert, in the last couple maiden races before that, had unleashed Nadal (Blame) and Charlatan (Speightstown)–those were the last two that had won the straight maiden races. And then he had an American Pharoah that he really liked in our race, and I’m like, ‘We’re probably not that good, but he could hit the board.’ The instructions were to let him settle in and make a little bit of a run and see what he could do.”

Off a step slowly in his Mar. 7 debut, Drop the Chalupa raced second-last as the 3-5 Baffert firster American Code (American Pharoah), a $350,000 Keeneland September Yearling, set the pace. Starting to pick up his feet while three wide past the five-sixteenths pole, the chestnut charged up alongside the favorite at midstretch and inched away late to score the 1 3/4-length upset (video).

“I was very impressed because I didn’t have him 100% cranked up and we didn’t ride him 100%,” Ellis said of that debut effort. “I wanted him to round into form gradually. He’s not a big horse, he’s just medium-sized, nicely balanced horse. When I bought him, he really reminded me of a Grade I winner I had a few years back, [2013 GI Triple Bend H. winner] Centralinteligence (Smarty Jones). That horse we kind of did the same program with. He ran third first time out and then won his next start. So I was just looking for something like that, run third first time and come back and win the second start.”

Of the youngster’s appeal, Ellis said, “He is by Liam’s Map, who I was kind of high on going over to the sale because he had quite a few horses who worked well. And they’ve come out running.”

Still buyers may have been put off by the juvenile’s work.

“He blew his workout,” Ellis said. “He started to work and then he bolted, then he came back in. He still worked in :10 2/5. And I thought, ‘Well, if he had run straight, he would have worked a tick or two faster.’ So I went over and looked at him and he seemed quite sensible. Usually those horses will show if they’re nuts. And if he had bolted because he was nuts, then I wouldn’t have been interested in him. He acted quite sensible at the barn, so I figured it might have just been a single incident, rather than a habitual one.”

Ellis is giving the gelding plenty of time to regroup from his debut effort.

“I’m just letting him build back up,” the trainer said. “It’s going to be kind of tough to spot him because now he’s going to run against winners and maybe even older winners. So I’m just giving him a little bit of time to regroup off of that and see where he goes. We’ll let him take us there, instead of us pushing.”

Ellis has nine horses in training for Templer, whose Doubledown silks have been carried to victory over the years by Grade I winner Black Mamba (NZ) (Black Minnaloushe) and graded stakes winners Recount (Limehouse) and Ben’s Duchess (Munnings), as well as Grade I placed Blameitonthelaw (Blame).

“He just loves racing,” Ellis said of Templer. “And he’s been super patient with all the things we’ve gone through in the last year [in California].”

Ellis will once again be representing the Chicago native at this year’s delayed 2-year-old sales, but will be working with an increased budget.

“He asked me to find him two to three really nice 2-year-olds,” Ellis said. “When I said that might be a higher price point, he said, ‘I’m not getting any younger.’ And I said, ‘I love that attitude.'”