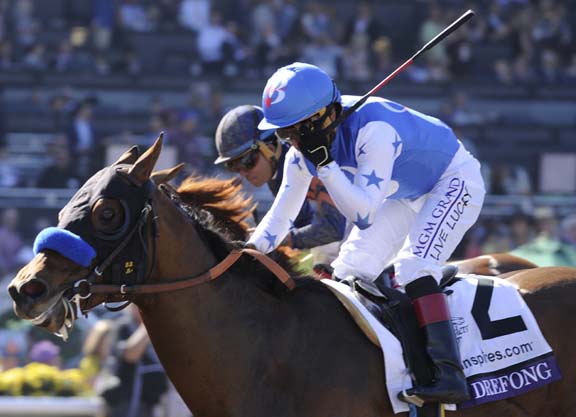 Baoma Corporation's Drefong (Gio Ponti) battled favored Masochistic (Sought After) head-to-head for much of the contest, but got the best of that tiring rival in deep stretch to win the GI Breeders' Cup Sprint going away by 1 1/4 lengths. Masochistic just held off the late-rushing longshot Mind Your Biscuits (Posse) for second.

“What a racehorse. What a race,” said trainer Bob Baffert, who was winning his fifth Breeders' Cup Sprint and 13th Breeders' Cup race. “He's been getting better and better, but we didn't know how fast he was. He had trained so well coming into this race, I thought he was peaking. When I saw him in the paddock I just knew he was going to get it done.”

Masochistic broke running and was soon at the head of affairs, but he was quickly joined by Drefong from the rail and longshot Delta Bluesman (Wagon Limit). The two heavyweights put Delta Bluesman away after a quarter in :21.49 and were head and head through a half in :44.03. Drefong gained a slim advantage in upper stretch and was still finding more in deep stretch, while Masochistic grimly held on to the place spot.

“We drew a great post down the inside,” commented winning rider Martin Garcia. “My horse broke sharply and came out running. My horse likes to run on the lead and ran hard every step of the way.”

Connections of Masochistic were far from disgraced by the favorite's runner-up effort.

“My horse ran dynamite but Drefong was tremendous,” said jockey Mike Smith. “I wish there was something I could have done differently but Drefong just kept running. Every time I thought I would go get away, there he was again.”

Trainer Ron Ellis admitted he thought at one point he had the Sprint winner.

“Mike got him a perfect trip,” Ellis said. “I thought we were a winner at the quarter pole, but the other horse [Drefong] just dug in and outgamed us to the wire. We just got beat by a better horse today.”

The lightly raced Drefong was tabbed a 'TDN Rising Star' after his 9 1/2-length romping graduation at Del Mar last November. Sidelined for six months after that effort, the handsome bay returned with a speedy front-running victory in a six-furlong optional claimer at Santa Anita May 30. He added another sparkling 5 1/4-length victory going 6 1/2 furlongs in Arcadia July 4 before making his stakes debut with a wire-to-wire victory in the Aug. 27 GI King's Bishop S.

Drefong is the first horse raced by Charlie Chu's Baoma Corporation. Chu and his wife Susan, who campaigned graded stakes winners Super Ninety Nine (Pulpit) and Chitu (Henny Hughes) under her Tanma Corporation banner, enjoyed the Sprint victory with a large contingent of family and friends.

“We are so honored to be sitting here with Bob and with Martin together,” Susan Chu said. “Bob knows how much we love this sport, and we love our horse. I'm so appreciative to everybody doing everything for us, Bob and [assistant trainer] Jimmy [Barnes], [bloodstock agent] Donato [Lanni], everybody in Bob Baffert's stable that support us 100%. We so appreciate that we have a chance to be winning today. So this is so joyful. We have a big, strong family coming to support us today from everywhere, all over the country to watch us on such a special day. This is really so joyful.”

A daughter of multiple graded stakes placed Najecam (Trempolino), Eltimaas is a half-sister to champion 2-year-old and GI Breeders' Cup Juvenile winner Action this Day (Kris S.). The unraced mare was bred by Jaime Carrion, who also bred Action this Day, as well as champion Meadow Star and Grade I winners Cutlass Reality and Meadowlake. Carrion dispersed his bloodstock in 2008. Eltimaas was purchased by Shadwell for $600,000 as a Keeneland September yearling in 2008. She brought 20,000gns as a 3-year-old at Tattersalls December in 2010.

Drefong is from the first crop of Castleton Lyons's three-time Eclipse champion Gio Ponti (Tale of the Cat), who was second behind the great Zenyatta at Santa Anita in the 2009 GI Breeders' Cup Classic. He was runner-up again in the 2010 GI Breeders' Cup Mile. Gio Ponti is also the sire of this year's Queen's Plate winner Sir Dudley Digges and Irish stakes winner Planchart. Click to read TDN Sharper Focus on Drefong (11/16/15).