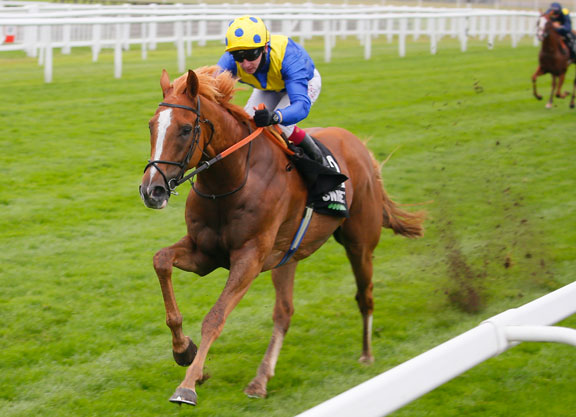 For so long one of those “nearly horses” in the best company, Saeed Suhail's Dream of Dreams (Ire) (Dream Ahead) had all the cards fall in his favour on Saturday and duly showed what he is made of with a romp through the easy ground in Newbury's G2 Unibet Hungerford S. Always cantering in the hands of Oisin Murphy, the 13-8 favourite who was last seen finishing a painfully narrow runner-up in Royal Ascot's G1 Diamond Jubilee S. June 20 was given the green light two out and surged clear for an emphatic seven-length success from Breathtaking Look (GB) (Bated Breath {GB}), with 4 1/2 lengths back to Symbolize (Ire) (Starspangledbanner {Aus}) in third. For the rider, it was an important moment to send some positivity to Sir Michael Stoute whose partner Coral Pritchard-Gordon had passed away this week after a long illness. “It means the world–not only for Sir Michael but everyone connected to his yards in Newmarket,” he said. “It's been a tough week and I want to pass on my condolences to him and his family. He felt very good and completely outclassed them. He gave me a dream ride and a brilliant feel.”

Runner-up in this in 2018, Dream of Dreams was shortened up after his subsequent start when again second in Goodwood's G3 Supreme S. and justified that decision when filling the same spot in the six-furlong G3 Bengough S. at Ascot's early October meeting. Back at that venue eight months later, the chestnut was in front of Blue Point (Ire) (Shamardal) a stride after the line but officially a head second in the G1 Diamond Jubilee S. before his form nosedived with three unplaced efforts in the G1 July Cup, G1 Haydock Sprint Cup and G1 QIPCO British Champion Sprint S. Gelded in the winter, he had put in a remarkable deja vu effort in the June 20 Diamond Jubilee and again was a head second and again in front just after the winning post as Hello Youmzain (Fr) (Kodiac {GB}) enjoyed the limelight. This may not have been a strong Hungerford, but the way he tanked past Breathtaking Look heading to two out was a sight rarely seen and his relentless march to the line was visually stunning. The triple group 3 winner Namos (Ger) (Medicean {Ger}) was never able to land a blow, while last year's winner Glorious Journey (GB) (Dubawi {Ire}) was beaten 14 1/2 lengths and the talented 3-year-olds Pierre Lapin (Ire) (Cappella Sansevero {GB}) and Surf Dancer (Ire) (Lope de Vega {Ire}) were trounced.

“It was the plan to ride him much colder, but Breathtaking Look was not taking me any further so I had to go two down,” Murphy added. “A stiff six or flat seven is fine and he's been unlucky not to win a few group 1s.” Stoute's assistant James Horton added, “He travelled very well through that and picked up nicely. He always threatened to win a big one and I'm delighted for everyone at home that has done a great job with him. He has been knocking on the door, this lad. He has been second in two Diamond Jubilees and has been very unlucky not to win either. It's great for Saeed to have another big winner with a proper horse and it's great for the boss.”

“I think he is very versatile and can go six or seven. He just needs a nice pace and something to aim at. We will have to see how he is. We think he runs best fresh so we will get him home, freshen him up and see where we go from here. We have to run him when he is bouncing and if he isn't, it is not right. Before Ascot and today we have been very pleased with him, so we know the timing is right. We will talk to Saeed, Bruce Raymond and the boss. No plans are imminent anyway.”

Reflecting on the past week, Horton said, “It will mean a lot to everyone. It is a very sad time at Freemason Lodge at the moment. Coral was a rock for everyone in the yard, the boss more than anyone. She looked after everyone. She was always the first person to come out and make sure everyone was okay. If anyone had any issues or problems she was always the person to go to. It has been a tough week. This is a very poignant winner for the boss and everyone at home.”

Another of Airwave's daughters Meow (Ire) (Storm Cat) took the Listed Curragh S. and was runner-up in the G2 Queen Mary S. before earning the title of broodmare of the year in 2017 courtesy of the Galileo duo of Churchill (Ire) and Clemmie (Ire). Also responsible for their G3 Diamond S.-winning full-brother Blenheim Palace (Ire), Meow has another Galileo making his way up the ranks at Ballydoyle in the 3-year-old colt Keats (Ire) who was recently third in the Listed Silver S. Airwave's ill-fated half-sister Jwala (GB) (Oasis Dream {GB}) caused an upset in the G1 Nunthorpe S. to add to the family laurels before being fatally-injured in the 2013 G1 Hong Kong Sprint. Vasilia also has a yearling filly by Galileo to come.