Dramas and Delight as Vardy Wins the L'Ormarins Queen's Plate 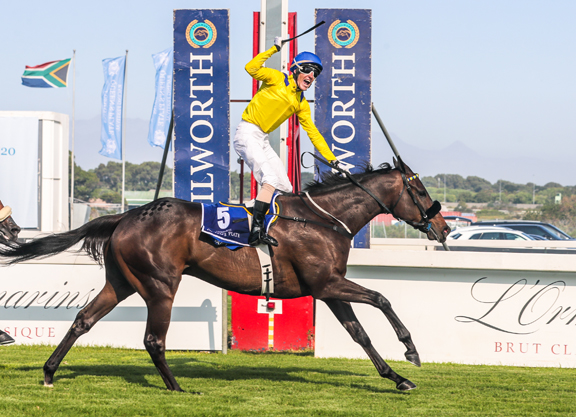 The 159th running of the R1.5 million L'Ormarins Queen's Plate WFA at Kenilworth Racecourse–a Breeders' Cup 'Win And You're In' race–was anything but ordinary. The field had barely arrived at the start when a grass fire broke out across the road from the track. With the prevailing wind sending billowing clouds of smoke across the tracks, the horses were placed in a hold, while the effect of the smoke was considered. When loading finally commenced, it appeared that Pack Leader (SAf) (Philanthropist) and Twist Of Fate (SAf) (Master Of My Fate {SAf}) had managed to lose shoes during the delay and had to be reshod. However, the farrier had no sooner downed tools when both Do It Again (SAf) (Twice Over{GB}) and favourite Hawwaam (SAf) (Silvano {Ger}) managed to break their bridles.

However, the lengthy delay appeared to have no effect on the Adam Marcus-trained Vardy (SAf) (Var)–winner of Kenilworth's G2 World Sports Betting Green Point S. Dec. 14. Pushed to the front with 50 meters to go, the gelding's regular companion Craig Zackey had the finish firmly in his sights and not even the reputations of the superstars behind was going to dent his faith in the son of sprint sire Var (Forest Wildcat).

Zackey kicked for home and the glory of his first L'Ormarins Queen's Plate victory, while One World (SAf) (Captain Al {SAf}) and MJ Byleveld clung on for second, one and a quarter lengths back. Rainbow Bridge (SAf) (Ideal World) and Gavin Lerena finished third, with a nose separating the two.

Hot favourite Hawwaam, who infamously got scratched at the start of the Vodacom Durban July last year, was definitely affected by the dramas and delays at the start. The colt, who finished in 5th, 3.3 lengths behind the winner, over-raced badly, fighting with Anton Marcus most of the way and was consequently never in the race. De Kock said he was “left speechless” by the problems at the start and that the “real” Hawwaam would contest the G1 Sun Met over 2000m on Feb. 1 at Kenilworth.

Back in the winner's circle, Zackey hugged and kissed his mount in sheer delight: “I can't believe how easily he won. This horse is definitely one of the loves of my life! Now everybody knows how good he is.”

It was Adam Marcus's second Grade 1 and the young trainer could not believe the year he is having, after Mississippi Burning (SAf) (Captain Al {SAf}) delivered his first Grade 1 victory in the G1 Cape Fillies Guineas less than a month ago.

“Competing in this race is a dream come true and the way that Vardy won today was just sensational,” enthused Marcus. “He was a very immature horse, but I was fortunate enough to have the owners who allowed me time with him. Each race, he's got better and better, he has learnt how to race. When you start off training as a younger person, winning the Queen's Plate seems unreachable. You look up and you hope one day you will get there. This is only my seventh season and to win this race is a dream come true.”

When asked if the Breeders' Cup might be in the cards in November, he said, “Breeders' Cup! you're talking top of the world there. My brother was out there a couple of years ago and he just said that you couldn't believe how incredible it was. To even be invited is an honour for us, it would definitely go into the thought process. I will leave it up to the owners, but that would really be very special.”
Owners Bernard Kantor, Greg Blank, Jimmy Sarkis and Dale Yutar could not contain their delight.

“How does one ever describe such a victory? I can't describe the year that I had. Do It Again in the July and now the Queen's Plate,” said Kantor.

Blank concurred, “All credit goes to Adam and to Craig, he stuck with the horse. We race as friends, it's a great group of guys. Hopefully, this is the beginning of something big.”