Drain the Clock Up in Time in Woody Stephens 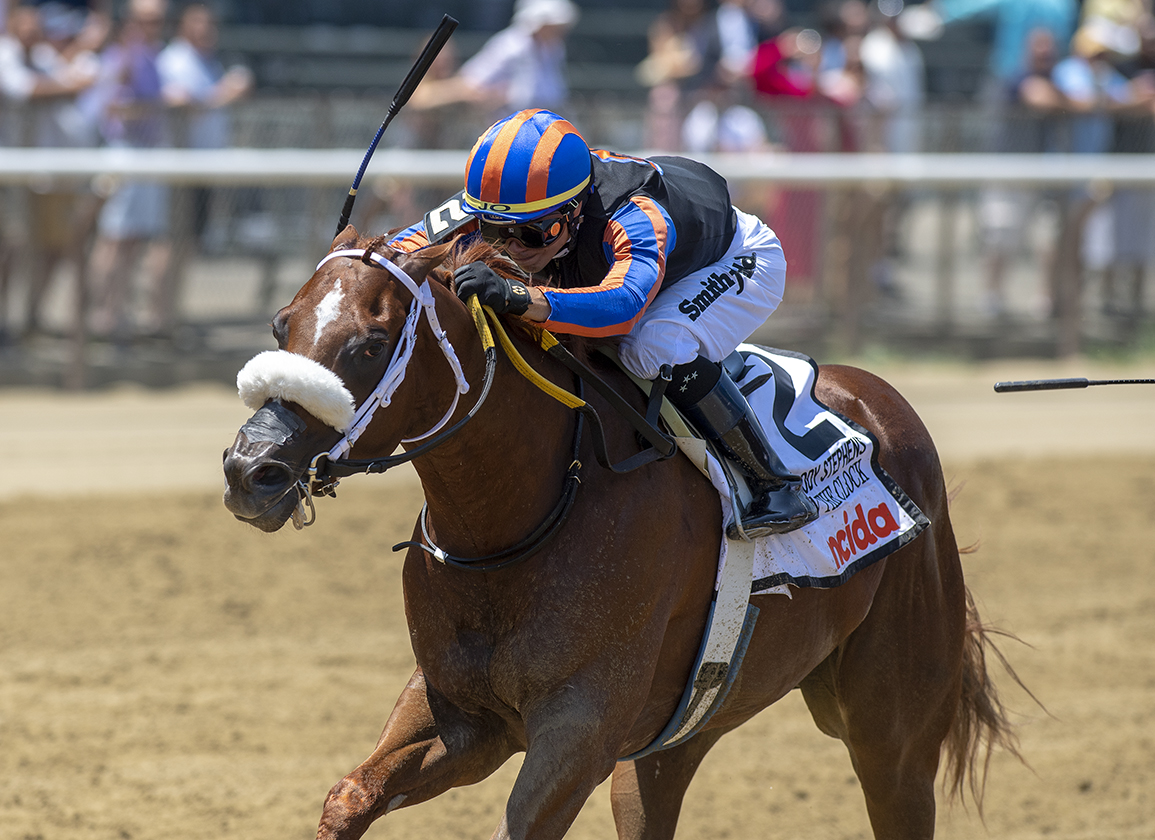 Drain the Clock (c, 3, Maclean's Music–Manki, by Arch) outslugged favored Jackie's Warrior (Maclean's Music) by a neck to lead home a one-two finish for his sire in a thrilling renewal of the GI Woody Stephens S. at Belmont Park Saturday. It was 7 1/4 lengths back to Nova Rags (Union Rags) in third.

With Jose Ortiz subbing for his sidelined brother Irad Ortiz, Jr., the last out GIII Bay Shore S. winner broke sharply and very briefly cleared the field of six. Jackie's Warrior, off a step slowly after getting bumped at the start, rushed up and challenged from the inside as those two locked horns through an opening quarter in :22.09 and half mile in :44.19.

Last year's GI Champagne S. winner held a slight advantage and floated Drain the Clock into the seven path as they hit the quarter pole. Jackie's Warrior led by a length at the stretch call and continued to dig down gamely, but Drain the Clock just kept on coming on the outside and wore down that rival to win in a pulsating finish at odds of 7-1.

A runaway winner of Gulfstream's Limehouse S. Jan. 2 and GIII Claiborne Farm Swale S. Jan. 30, Drain the Clock stretched to 1 1/16 miles with a solid second after setting the pace in the GII Fasig-Tipton Fountain of Youth S. Feb. 27. He bypassed the Triple Crown trail and turned back to seven furlongs for an easy score in the Bay Shore Apr. 3.

“We talked it over so much with [co-owner] Nick Cosato [of Slam Dunk Racing] and he wanted to break well and use him for the lead,” winning trainer Saffie Joseph, Jr. said. “We just left it up to Jose [Ortiz]. We told him the break was important and to make [Joel] Rosario [aboard Jackie's Warrior] make a decision. If they're going to let you lead, lead.

Ortiz added, “That's what it's all about, people want to come here to see those kinds of duels. It was a great race, everybody gave their best. I'm just happy we came out with the win and I'm happy filling in for Irad [Ortiz] and not messing it up.”

Joseph added that the GI Allen Jerkens Memorial S. at Saratoga Aug. 28 would be next for Drain the Clock.

Drain the Clock is one of five graded winners for promising young sire Maclean's Music. This is his fourth Grade I winner. Arch is the broodmare sire of 31 graded winners, including standouts such as dual Classic winner I'll Have Another and champion Uncle Mo.