Dr. Schivel Overcomes Adversity and Runs Them Off Their Feet 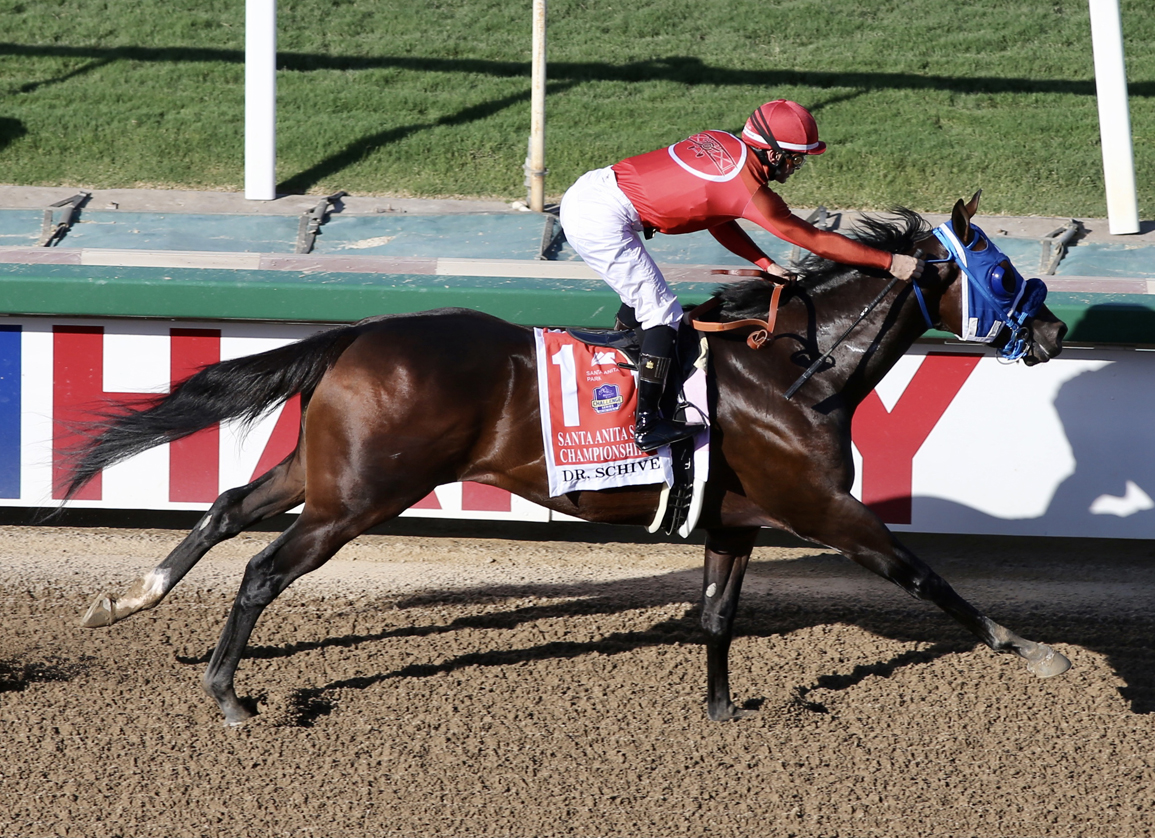 Dr. Schivel (Violence), already guaranteed a spot in the starting for the GI Breeders' Cup Sprint via a win in the GI Bing Crosby S. July 31, added a second straight 'Win and You're In' tally over his elders in Saturday's GII Santa Anita Sprint Championship S.

Drawn on the fence while facing five rivals, last term's GI Runhappy Del Mar Futurity S. winner showed much more speed than usual, forcing the issue from an inside–and tight second–in the early stages and had to tap on the brakes slightly at the five-eighths marker when Prat's right rein came undone from the strap.

Undeterred, the 9-5 favorite took charge through an opening quarter in :21.87, began to edge away approaching the quarter pole, and, with Prat, essentially riding with one rein and giving his charge right- and left-handed reminders, had five lengths in the stretch before being geared down late in an ultra-impressive performance.

“I had just the left rein after we left the chute at around the five and half mark,” said Prat. “It was kind of scary. This has never happened to me before. The horse was very proficient. Everything was normal otherwise. I let the other jock [Abel Cedillo, aboard Vertical Threat] know that I only had one rein and to stay out of the way. Everything worked out great and we got home safely.”

A maiden winner at third asking for former trainer Luis Mendez and for his co-breeders William A. Branch and Arnold R. Hill,

Red Baron's Barn, Rancho Temescal and William Dean Reeves joined the ownership group ahead of his score in Del Mar Futurity and was given the balance of the year off.

Programmed for a late-season sophomore campaign under the tutelage of Mark Glatt, he returned to action with a tough neck victory in a six-furlong Santa Anita allowance June 18 prior to his Bing Crosby score.

With his Futurity victory late last summer, Dr. Schivel became the third of three Grade I winners in 2020 for his sire, joining 'TDN Rising Star' No Parole and Volatile. One of 32 stakes winners (12 graded) for Violence, he is the only black-type winner from a daughter of former Jeff Bonde trainee Mining for Money (Mining), a half-brother to MGSW Intrusion (Top Command), who was a maiden winner and stakes placed in two trips to the post. A half-sister to GI Clement L. Hirsch S. winner Ultra Blend (Richly Blended), Lil Nugget is the dam of the 2-year-old colt Barsini Red (Midshipman), did not produce a foal in 2020 or this year and was most recently bred to Anthony's Cross.