Home » Archive » Shared News » Down the Shedrow with Kiaran McLaughlin

Down the Shedrow with Kiaran McLaughlin 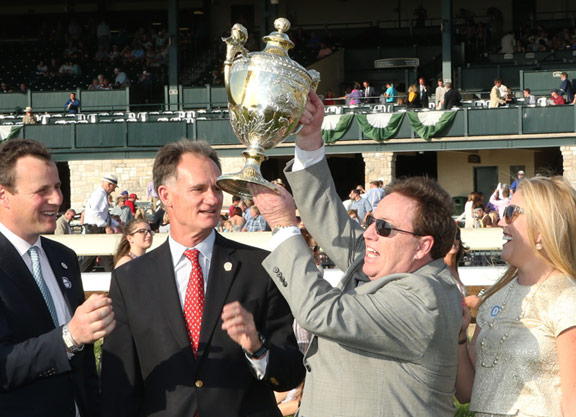 With three Breeders' Cup triumphs, a GI Belmont S. win and 40 Grade I victories to his credit, trainer Kiaran McLaughlin has built up quite a resume since going out on his own in 1993. The Lexington, Kentucky native achieved another career high Saturday when winning a record-tying four races at Keeneland, including the GI Coolmore Jenny Wiley S., for longtime owner Godolphin Racing.

“It was fabulous,” McLaughlin remarked Wednesday afternoon. “It was a day I will never forget and one of the biggest days of my career.”

Armed with a steadily improving new Grade I winner in Jenny Wiley heroine Dickinson (Medaglia d'Oro) and promising young runners, such as new “TDN Rising Star” Tasteful (Street Cry {Ire}) and the regally-bred Fayeq (Malibu Moon), McLaughlin looks primed to continue his Keeneland success back at his home base in New York this spring and summer.

“She came out of the race great. She's a very nice turf filly. That was the biggest difference, so we are happy we switched surfaces last fall. We will point for the [GI] Just a Game S. [on GI Belmont S. day June 10].”

Runner-up in her Gulfstream unveiling Feb. 12, Godolphin's Tasteful overcame a slow start and wide journey to become a “TDN Rising Star” at Keeneland Saturday with an ultra-impressive 3 3/4-length victory (video).

“She came out of it in good shape. We will look to go to New York with her next, probably to an A-other-than [allowance].”

“TDN Rising Star” Watershed earned his first black-type badge at Keeneland Saturday with a victory in the GIII Ben Ali S. (video), which his brought his record at the Lexington oval to two-for-two.

“That was great too. He came out of it in great shape and we will probably look at the [GII] Brooklyn June 10 at Belmont. It is a mile and a half, but I think he will handle that. The timing of it [will be good for him]. It fits well in his schedule. I'm not sure about the mile and a half, but they don't write that many of them, so we will give it a try once.”

“We are pointing for the Westchester at Belmont on [GI Kentucky] Derby day [May 6]. He put on 140 pounds when he went home. He just needed to get away from the racetrack and drop his head and eat some grass. He was a May foal, May 3 I think, so it is nice that he's filled out and looks great. He is training very well and we are excited to get him back.”

Purchased by Godolphin for $400,000 at the 2014 Fasig-Tipton Saratoga sale, Kareena was tabbed a “TDN Rising Star” after a scintillating five-length graduation at second asking at Keeneland this time last year (video). Following suit with another impressive score in Belmont's Jersey Girl S. in June, the bay finished off the board in the GI Test S. and GII Prioress S. at Saratoga this summer and has since been retired due to injury with a record of 5-2-1-0 and earnings of $148,000. The 4-year-old is a daughter of MGSW India (Hennessy), who is a half-sister to blue hen mare Pilfer (Deputy Minister), the dam of GISWs To Honor and Serve (Bernardini) and Angela Renee (Bernardini).

“She actually is retired. She was unlucky and broke her pelvis just galloping one day, but she is fine and going to be a mother.”

A half-brother to Hall of Famer Rachel Alexandra (Medaglia d'Oro) and son of GSP Lotta Kim (Roar), Fayeq summoned $800,000 from Shadwell Stable at the 2015 Keeneland September sale. Third to “TDN Rising Star” Timeline (Hard Spun) when unveiled in a Mar. 4 Gulfstream maiden special that has produced several next out winners, the bay finished fifth behind a “TDN Rising Star” performance from Time to Travel (Hard Spun), who finished fourth in both Fayeq's debut and Saturday's GIII Stonestreet Lexington S., next out in Hallandale Apr. 1.

“He is doing very well. He will come to New York soon. We will find a maiden race mid-May for him. He is a very nice horse.”

Shadwell Stable homebred Takaful sped from gate to wire to don cap and gown by eight lengths and earn the “TDN Rising Star” distinction in his career bow at Belmont Oct. 29 (video). Third as the favorite in the GII Remsen S. Nov. 26, the dark bay finished off the board in both the Jan. 2 GIII Jerome S. and Mar. 4 GII Fountain of Youth S.

“He is here in New York training. We backed off a little bit and have just been galloping, but he is soon to work and then we will pick up his worktab. We will look at the [GII] Woody Stephens S. [June 10] and maybe go back to sprinting.”

Calumet Farm's True Timber followed a second out graduation at Aqueduct in December with a third in the Jerome and second in the GIII Withers S. Feb. 4. Fifth in the GIII Gotham S., the $170,000 KEENOV weanling was most recently fourth in the GII Wood Memorial S.

A half-sister to MGISW Frosted (Tapit) and daughter of GSW Fast Cookie (Deputy Minister), Indulgent boasts a record of 6-3-2-0 in her young career. The Godolphin runner missed by just a half-length when second last time in Aqueduct's GIII Distaff H. Apr. 9.

“We will point for the [GII] Ruffian May 13 going a mile at Belmont. We think she wants to stretch out.”

When asked if there were any similarities between Indulgent and Frosted, McLaughlin said, “Not really. He is gray and she is bay, but they are both very nice horses. She is just a pleasure to train and be around.”

A half-brother to GSW & GISP “TDN Rising Star” Lady Shipman (Midshipman), Ranlo Investments' Dr. Corday checked in fourth on debut at Gulfstream Feb. 11 and improved to second next out there Mar. 3. The chestnut was sixth last time in the state-bred Sophomore Turf S. at Tampa Apr. 2.

“He is in Saturday in a maiden race at Gulfstream [race four] against Florida-breds.”

A $390,000 KEESEP buy, Ramona Bass and Cheyenne Stables' Girl Talk was third in her sprint debut at Keeneland last April and second when stretched to 1 1/16 miles at Belmont in June. Earning her diploma next out going nine furlongs at Saratoga July 25 (video), the daughter of MGSW One Caroline (Unbridled's Song) was subsequently shelved and returned a winner at Gulfstream Mar. 19.

“She is pointing to an allowance race next in New York and then we will hopefully go to stakes.”

“He is in New York at Belmont. He will run in a maiden race in May.”

Fourth in her 7 1/2-panel unveiling on the Gulfstream turf Feb. 12, Godolphin's Lido got up for a nose victory when extended to nine furlongs over the Keeneland lawn Apr. 8 (video). The bay is a daughter of Chilean Horse of the Year Cocoa Beach (Chi) (Doneraile Court), winner of the 2008 GI Beldame S. on dirt and 2009 GI Matriarch S. on turf and runner-up to Hall of Famer Zenyatta (Street Cry {Ire}) in the 2008 GI Breeders' Cup Ladies Classic.

“Lido is a very nice filly. She won at Keeneland. We will point for an allowance race in May.”

McLaughlin named Shadwell Stable's Farz, a son of MGSW & GISP Ocean Drive (Belong to Me), as one to watch this year. Benched after an allowance win on the Gulfstream lawn Mar. 5, the $325,000 KEESEP buy returned from a 13-month layoff to win an Apr. 1 Hallandale optional claimer in a dead-heat with Sovereign Award winner and GISW Lukes Alley (Flower Alley) in Hallandale Apr. 1 (video).

“I have a very nice turf horse Farz. He may run in the [GIII] Fort Marcy on Derby day in New York.”