Don't Bet On Most Accomplished Colt Being Favored in Derby 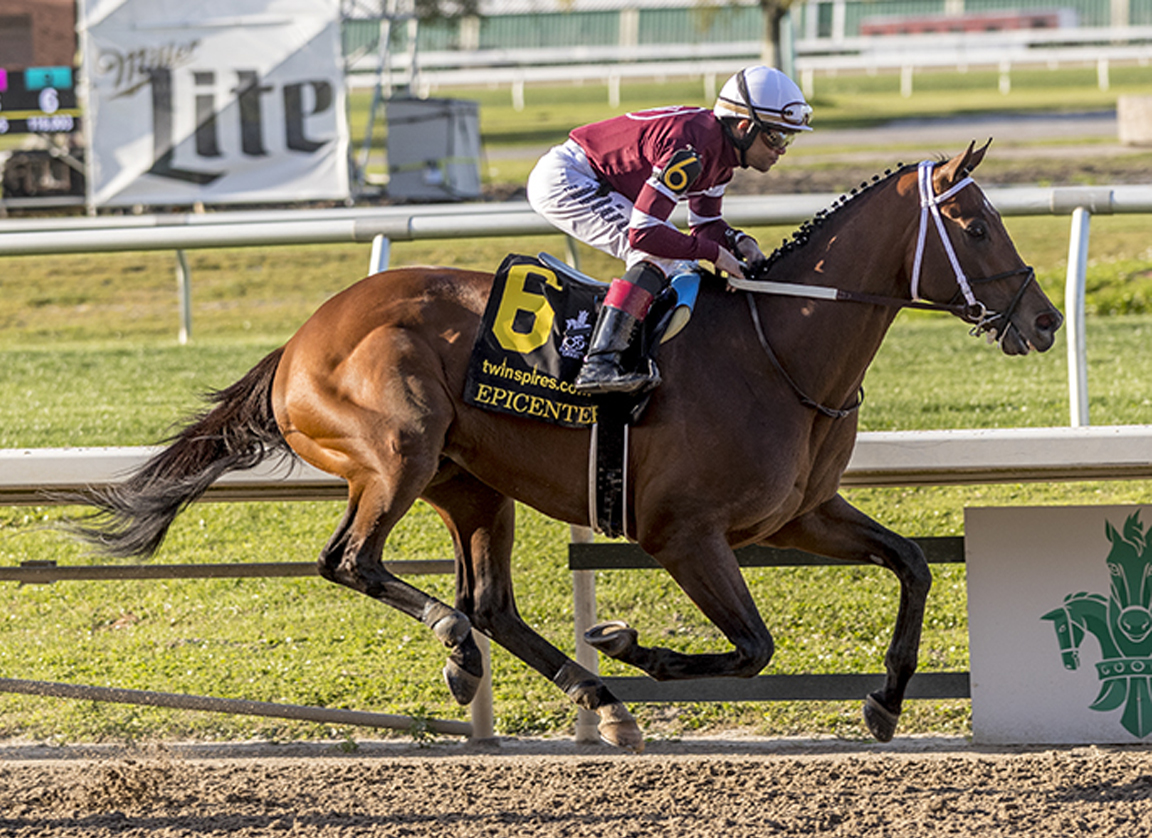 Epicenter (Not This Time) is the first horse on this year's GI Kentucky Derby trail to arrive back in the proverbial clubhouse. His afternoon work is finished for the next six weeks, and he's earned his berth in America's most important horse race in a thoroughly professional manner that checks many of the boxes on the Derby desirability list.

Epicenter's never-in-doubt dismantling of the GII Louisiana Derby field serves as a microcosm of his overall body of work: He's an adept breaker from the gate. His running style is speed-centric without a crazed need to seize the lead. He cranks out up-tempo quarter-mile splits without showing visible signs of duress. He can fight the entire length of the stretch (although he didn't need to in Saturday's even-keeled 2 1/2-length win), and he gallops out past the wire like he wants more.

You want additional attributes that suggest a blanket of roses on the first Saturday in May could be within this $260,000 Keeneland September colt's grasp? Epicenter, as a January foal with six lifetime races, has an edge as one of the oldest and most seasoned sophomores. His Beyer Speed Figures have ascended in each race without any wild fluctuations that might make them seem suspect. He's won four starts, including three around two turns, one each at nine furlongs and 1 3/16 miles, and one over the Derby surface at Churchill Downs.

Epicenter's only loss within the past six months came after he forced the issue from between foes in the GIII Lecomte S., held off a wall of horses at the top of the lane, repulsed a strong bid from the all-out favorite through the length of the long Fair Grounds stretch, then got nailed the wire by a last-gasp 28-1 shot (before quickly surging back in front several jumps after the finish).

The 102 Beyer this Winchell Thoroughbreds colorbearer earned in his Louisiana Derby romp is going to get a lot of ink. But here's an even more impressive set of metrics that won't get as much attention: Of all the two-turn Derby qualifying races run in 2022, regardless of the distance, only three of them have featured internal quarter-mile splits under 25 seconds each. Epicenter orchestrated two of those performances–his Louisiana Derby and Grade II Risen Star S. wins (The other prep with all sub-25-second quarters was the GIII Holy Bull S. at Gulfstream.)

Yet despite that impressive list of accomplishments, it's a likely bet Epicenter won't be favored on Derby Day.

More than any other race of the year, betting on the Derby is highly driven by headlines and easy-to-grasp media narratives. Recency bias also plays a big role, meaning the wagering public puts outsized emphasis on events that have just occurred at the expense of those farther back in the rear-view mirror.

Put another way, Derby bettors love to zero in on compelling story lines that have to do with explosive last-race wins by young colts perceived as sky's-the-limit contenders (especially if they have human connections who love to talk up their chances).

While Epicenter is a lot of things in racehorse terms, it would be a stretch to label him as “flashy.” Crank-it-out consistency is more his style, and those types of Thoroughbreds typically get overlooked because there's no wave of hype driving the wagering sentiment.

Six weeks is a small eternity in the lead-up to the Derby. As the glow of Epicenter's shining winter/spring campaign recedes, how many times between now and May 7 do you think trainer Steve Asmussen is going to have to politely address his 0-for-23 record in the Derby, the longest active drought on record? That one stat will be repeated over and over again, and even if you don't believe it's entirely relevant to Epicenter's chances, it will certainly serve to inflate his odds.

Epicenter's broad, bay shoulders must also carry the burden of the Louisiana Derby itself. Not only is the premier race in New Orleans one of the least-productive Kentucky Derby prep races in history, but it's also one that increasingly appears to be infused with weird juju.

Yet now, because of oddball circumstances, the Louisiana Derby is on the verge of having two of its also-rans within the past three years recognized as Kentucky Derby winners via disqualification–Country House in 2019 (because of Maximum Security's in-race foul) and Mandaloun in 2021 (pending the still-under-appeal drug DQ of Medina Spirit).

But the career arc of Black Gold is more improbable than both of those bizarre happenstances combined.

According to legend (as recapped in Black Gold's National Museum of Racing and Hall of Fame bio), a horse owner in the 1910s named Al Hoots had a deathbed vision that his 34-for-122 mare U-See-It (sometimes spelled without the hyphens) would be bred to Col. E. R. Bradley's stallion Black Toney, and that the foal would win the Kentucky Derby. The mare had been so special to Hoots that he once–armed with a shotgun–refused to hand her over after she got claimed out of a race in Juarez, Mexico.

Several years later, after Hoots died, his widow, Rosa Hoots, did indeed breed U-See-It to Black Toney. When oil was discovered a short time later on her Oklahoma property, Mrs. Hoots became wealthy overnight, and in the spirit of the fortuitous oil strike, she named the colt Black Gold. As her husband had predicted, Black Gold won the 1924 Kentucky Derby, making Rosa the first woman to breed and own a Derby winner.

Black Gold was retired to stud but was not fertile. He sired exactly one foal, a colt. It was killed by a lightning strike.

At age six, Black Gold was returned to the racetrack for an ill-fated comeback. He went 0-for-4, and in his final start at the Fair Grounds, on Jan. 18, 1928, he suffered a catastrophic injury and was buried in the track infield.

The Louisiana Derby hasn't been short on talent in recent decades. Some pretty nice winners out of that race–Risen Star, Peace Rules, Hot Rod Charlie–blossomed into Grade I victors without winning the Kentucky Derby. Asmussen himself even trained two eventual Grade I grads who won the Louisiana Derby, namely Gun Runner and Pyro.

This spring, Epicenter has a chance to rewrite the Derby map that links New Orleans and Louisville. And if you like his chances in the aftermath of his Louisiana Derby score and what he's shown us so far, just wait another month and a half for his price to ripen come Kentucky Derby day.