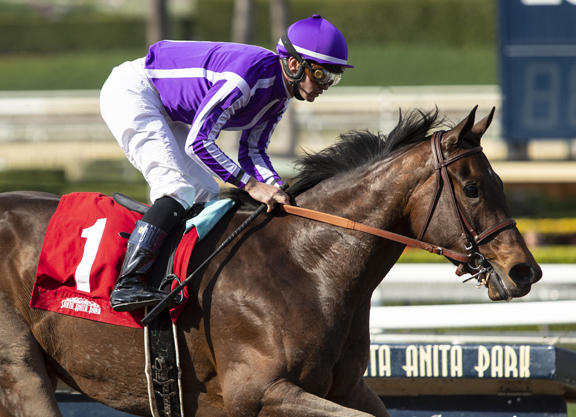 Considered one of the leading members of her division before she went to the sidelines this spring Donna Veloce (Uncle Mo) has reemerged as a serious candidate for the Sept. 4 GI Kentucky Oaks.

After finishing second as the favorite in the GI Breeders’ Cup Juvenile Fillies and again in the GI Starlet S., Donna Veloce began her 3-year-old campaign with a win over Speech (Mr. Speaker) in the GIII Santa Ysabel  S.Mar. 8 at Santa Anita. Sidelined with what trainer Simon Callaghan called “a little minor thing,” she has not run since the March race.

“She is a possibility for the Oaks,” Callaghan said. “She will have an important breeze on Friday [at Del Mar]. We are actually planning on doing it just before the races begin and [jockey] Flavien Prat will breeze her. That will be a pretty good indicator of whether we think the Oaks is the right race for her or whether we go in the [Sept. 4 GII] Eight Belles [S.]. I am pretty sure she will be coming to Churchill for one race or the other.”

Whether she goes in the Sept. 4 Oaks or the seven-furlong Eight Belles, Donna Veloce will face the difficult task of having to face top competition after a layoff of nearly six months. Callaghan said his filly is up to the task.

“Typically, this obviously would be a big ask for any horse,” he said. “This filly does seem to fire really good races fresh. She is that type of filly. She broke her maiden first time out after a relatively light breeze campaign. When we gave her some time off and brought her back this year for the Santa Ysabel she came back and won off a layoff. She gets herself pretty fit in the morning and she puts a lot into her breezes. She’s extremely clean winded and is definitely the type of filly that can get herself ready.”

Should she go in the Oaks, she’ll also have to prove she has the ability to beat what may be two of the best fillies to come around in years in Gamine (Into Mischief) and Swiss Skydiver (Daredevil)

“They are two super talented fillies,” Callaghan said. “There’s no doubt about that. Gamine might have some distance limitations. I’m not saying she does but she could, But she is insanely talented and so is Swiss Skydiver. It is without question a very, very deep field.”