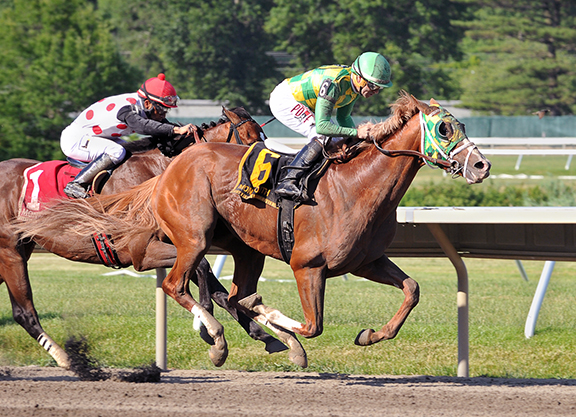 Donegal Moon (Malibu Moon) scored his first graded stakes victory Sunday with an upset of previously undefeated “TDN Rising Star” and two-time graded winner Unified (Candy Ride {Arg}) in Monmouth Park's GIII Betfair.com Pegasus S., which is one of two local preps for the July 31 GI Betfair.com Haskell Invitational S. With Unified taking all the money at 1-5, the Donegal Racing colorbearer was sent off at twice his 3-1 morning-line quote, a price bettors don't often see on a Todd Pletcher-trained 3-year-old. In no hurry early, the chestnut caboosed the field as longshot Saratoga Jack (Emperor Tiberius) set an opening quarter in :23.70 and he had one rival beat as they hit the half in :47.63. With the favorite being hard ridden in third approaching the bend, Donegal Moon continued to make progress up the fence. Unified called it quits at the top of the lane, but Donegal Moon was just finding his best stride and split rivals late to get up for a 1 1/4-length victory over 28-1 shot Extinct Charm (American Lion). Unified, who won the nine-furlong GII Peter Pan S. last time, but was trying two turns for the first time here, faded to fifth.

“It's so fun to ride for Team Pletcher,” remarked winning rider Joe Bravo, who also captured Saturday night's GI Stephen Foster S. aboard the Monmouth-based Bradester (Lion Heart). “Todd [Pletcher] texted me earlier and the instructions worked out perfectly. There was so much early speed in the race and the race set up great for us. In the stretch, he really came running strongly. This was a fun two days.”

As for the beaten favorite, jockey Jose Ortiz said, “He broke really well from the gate and he was going good for the first half mile. I asked him to go around the three-eighths pole and just didn't have it today.”

Donegal Moon graduated at fourth asking at Keeneland last October and faded to fifth behind Mohaymen (Tapit) after setting the early pace next out in the GII Remsen S. at Aqueduct a month later. Kicking off his sophomore season in Ozone Park's GIII Jerome S. Jan. 2, he fell to his face at the start, unseating jockey Manuel Franco, and came back to finish fifth next time in that venue's GIII Withers S. Jan. 30. Sent to Parx for a confidence builder and some easier company, the sophomore crushed an allowance field by 13 1/2 lengths Mar. 5, but was a non-factor eighth next out when stepped back up to stakes company in Keeneland's GI Blue Grass S. Apr. 9. The $220,000 KEESEP buy was last seen finishing fourth behind promising Bob Baffert trainee American Freedom (Pulpit) in a muddy renewal of Pimlico's Sir Barton S. May 21.

Jerry Crawford's Donegal Racing was second behind Horse of the Year American Pharoah (Pioneerof the Nile) in last year's Haskell with Keen Ice (Curlin), who went on to upset the Triple Crown winner next out in the GI Travers S.