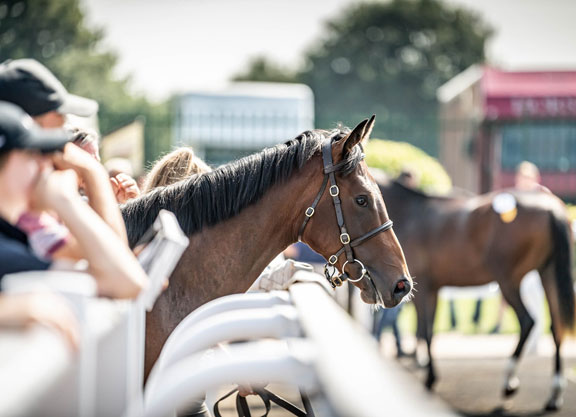 The start of the racing season, and in fact the yearling sales season itself, may have been badly impeded by the coronavirus pandemic, but that didn't stop Goffs UK's Premier Yearling Sale graduates from getting off to a flying start once things finally did get underway. One of the fastest from the gate was The Lir Jet (Ire) (Prince Of Lir {Ire}), whose debut victory three days after racing's resumption on June 3 led to a private deal with Qatar Racing and a subsequent victory in the G2 Norfolk S. 16 days later. It was the second straight year that a Premier graduate had taken that Royal Ascot feature, following on from A'Ali (Ire) (Society Rock {Ire}) in 2019, and it was the first of the sale's two title defenses of the meeting, with Golden Horde (Ire) (Lethal Force {Ire}) taking the mantel from Advertise (GB) (Showcasing {GB}) in the G1 Commonwealth Cup an hour later.

The Lir Jet would go on to finish second to fellow Premier graduate Ventura Tormenta (Ire) (Acclamation {GB}) in the G2 Prix Robert Papin and was runner-up again in the G1 Keeneland Phoenix S.

Such is the quality of last year's Premier Sale intake, however, that it could be someone other than The Lir Jet or Ventura Tormenta who winds up top of the heap. Supremacy (Ire) (Mehmas {Ire}) proved to be well-named with a four-length score in the G2 Richmond S. on July 30 that earned him a rating of 115. Method (Ire) (Mehmas {Ire}) looked a smart type when taking the Listed Rose Bowl S. at second asking in July, and the filly he had beaten by 4 1/4 lengths on debut, Fev Rover (Ire) (Gutaifan {Ire}), came roaring back to take the Listed Star S. and last weekend won the G2 Prix du Calvados. These are among nine graduates of last year's Goffs UK Premier Yearling Sale to have already won stakes, and they set a strong precedent for the 423 yearlings set to go under the hammer at this year's edition of the sale at Doncaster on Sept. 1 and 2.

“It's been a wonderful year on the track and we have a wonderful bunch of horses,” said Goffs UK's Managing Director Tim Kent. “If we were in a normal year we'd be very confident we'd have a wonderful sale but it's difficult to know what to expect with the way everything is going, but the market has held up remarkably well in Europe up until now. The breeze-up sales went better than anyone expected and the horses in training sales have had plenty of demand. So we have to hope that continues. We're confident we have a nice draft of horses and the stallion index is reading well. There have been a lot of photos on social media and videos online and just looking at those you think 'blimey, that's a nice horse…that's a nice horse…' and they're by the right stallions and from some good farms, so we're hopeful it will all come together.”

Three of the sale's likely heavyweights will come on day two, beginning with a Starspangledbanner (Aus) half-brother to Ventura Tormenta (lot 313) from Baroda Stud. Given the Group 2 update supplied by his elder brother, that one is likely to provide a hefty return on the €40,000 paid by the Tweenhills team Redwall Bloodstock at Goffs November last year.

Just a few lots later Salcey Forest Stud's Cotai Glory half-sister to A'Ali (lot 322) will grace the ring (see Monday's TDN for more on her). And the very last horse through the ring is likely to ensure that bidders stick around; he is a full-brother to the 2016 sale topper and G3 Hackwood S. winner Yafta (GB) (Dark Angel {Ire}) (lot 423) offered by Highclere Stud, the same draft that sold Yafta as well as Golden Horde here. Others that appeal on paper include a No Nay Never daughter of the G3 Round Tower S. scorer Dingle View (Ire) (Mujadil) (lot 170); an Invincible Spirit (Ire) colt out of G3 Firth Of Clyde S. winner Distinctive (GB) (Tobougg) (lot 173); a Kodiac (GB) filly out of a half-sister to Equiano (Fr) (lot 195); a Night Of Thunder (Ire) colt out of a full-sister to champion sprinter Fleeting Spirit (Ire) (Invincible Spirit {Ire}) (f2lot 346); a Siyouni (Fr) filly out of a half-sister to GI Breeders' Cup Filly & Mare Turf victress Queen's Trust (GB) (Dansili {GB}) (lot 361); and a Lope De Vega (Ire) son of the Group 3-placed Royal Empress (Ire) (lot 380).

With the consequences of Britain's low prizemoney levels being increasingly felt, it is perhaps more important now than ever to provide owners with incentive to get in or stay in the game, and races like the £180,000 Goffs UK Premier Yearling Stakes open to all graduates of this sale can go some distance towards that. The winner of this year's contest at York on Aug. 20 was the Dandy Man (Ire) filly Happy Romance (Ire), who cost £25,000 at Doncaster a year ago and is the first horse owned by the McMurray family. It is likely no mistake, either, that trainer Richard Hannon targets the race so heavily, and Happy Romance gave him his fourth win in it in the past five years. Happy Romance was scratched from Saturday's G3 Prestige S. but will doubtless get her shot at black-type soon.

The Premier Yearling Sale S. has not only been taken by some quality fillies, but also by three of the best colts to ever come from the sale: Wootton Bassett (GB), Acclamation (GB) and his son Dark Angel (Ire). That triumvirate sits atop a burgeoning group of successful sires to have emanated from this sale.

Acclamation was a £33,000 purchase by his trainer Gerald Cottrell in 2000 under this sale's former guise as the St Leger sale and was a member of the first crop of his sire Royal Applause (GB). Acclamation capped a productive juvenile campaign the following year with a victory in the £200,000 St Leger Yearling Stakes. After an interrupted 3-year-old campaign he blossomed to take the Listed Starlit S. and the G2 Diadem S. at four, but it was in the breeding shed where his legacy was truly cemented. While his best runner was the superstar sprinting filly Marsha (GB), he has left behind a stacked roster of colts to carry on his line, thus far led by Dark Angel and Equiano (Fr) and with this year's first-season sensation Mehmas (Ire) potentially poised to join them. He can also lay claim to the very useful sires Lilbourne Lad (Ire) and Harbour Watch (Ire), the latter of whom is responsible for this season's impressive G2 King Edward II S. and G2 Great Voltigeur S. scorer Pyledriver (GB). And with young horses like Aclaim (GB) and Expert Eye (GB) still to have their first runners, the Acclamation sireline looks likely to continue to thrive.

Dark Angel, meanwhile, has already firmly established his own branch of the Acclamation line. Like Acclamation was, Dark Angel was a member of the first crop of his own sire and was a £61,000 purchase from the 2006 St Leger sale. He won the sales race for trainer Barry Hills in 2007 before going on to take the G2 Mill Reef S. and G1 Middle Park S. before retiring upon the conclusion of his 2-year-old campaign. Dark Angel's first crop, interestingly, would include the G1 Diamond Jubilee and G1 July Cup S. winner Lethal Force (Ire), the sire of current Goffs UK Premier Yearling Sale poster boy Golden Horde. Dark Angel looks in these early days to be making a similar mark on the breed to his sire, with Gutaifan (Ire) proving his prowess in his second year with runners and with Estidhkaar (Ire) and Markaz (Ire) each having gotten off to a promising start with his first runners this season. And while his best runner to date, Battaash (Ire), will not get the chance to pass on his genes as a gelding, Dark Angel still has the Goffs UK graduate and champion sprinter Harry Angel (Ire) waiting in the wings with his first foals this year. Another Group 1-winning sprinter to come from the sale with a chance to make his mark as a sire is the Phoenix S., Commonwealth Cup and Prix Maurice de Gheest scorer Advertise (GB), a £60,000 graduate who covered his first book at the National Stud this year.

Already a sire on the rise, Wootton Bassett is set to enter a different stratosphere, having been purchased by Coolmore just prior to getting his second Group 1 winner in the G1 Prix Jean Romanet victress Audarya (Fr). A £46,000 graduate of 2009, Wootton Bassett won the sales race midway through a perfect 2-year-old career which was capped by a G1 Prix Jean-Luc Lagardere score and French champion 2-year-old honours. With Coolmore having pledged the support of its impeccable broodmare band and with Wootton Bassett's best son Almanzor (Fr) set to have his first runners next year, there looks to be plenty more to come in the Wootton Bassett story.

With such opportunities on the line, the shrewdest buyers will not miss this week's Goffs UK Premier Yearling Sale. And as the first yearling sale during this pandemic-stricken season, all eyes will be on the figures as an indication of what is to come.

“The big thing for us will be clearance rate,” said Kent. “People have brought these horses here to sell and we're providing an opportunity for that to happen. The way we'll measure the sale is going to be different; the normal metrics will go out the window and it will be very much about clearance rate and feel. If vendors are happy with what they're achieving and purchasers are saying they can't buy horses, for us that's a good feel for this sale. We're normally worried about comparative metrics-average, turnover, median, that sort of thing. It'll be less about that this year and more about clearance rate and the ability to get horses sold.”