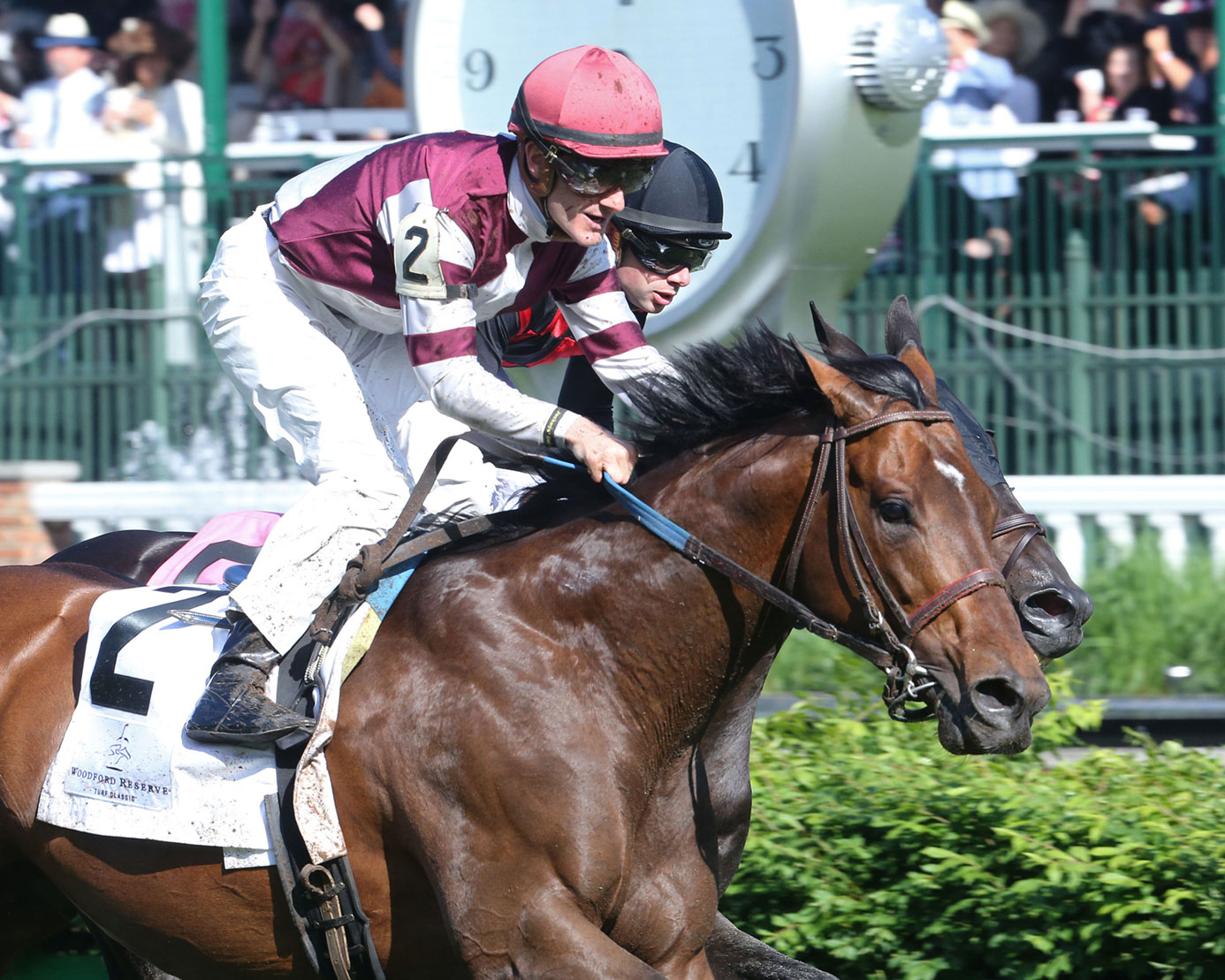 Suffice to say that Divisidero likes it at Churchill on Derby Day. Bet hard when the winner of the age-restricted GIII American Turf S. in 2015, the handsome bay was up in the final jump to take the GI Woodford Reserve Turf Classic 12 months back and doubled his pleasure with a stinging final-furlong rally Saturday afternoon.

Eased back to last from his low draw, Divisidero had just Oscar Nominated behind and to his outside passing under the wire the first time, as favored Beach Patrol-looking for his first victory since last year's GI Secretariat S.-galloped them along through moderate early fractions of :24.51 and :50.69 over the rain-affected Matt Winn turf course labeled good, but riding much slower. Beach Patrol continued to lead at his own pace entering the final half-mile, but the field was stacking up behind, and although Divisidero more or less remained the back marker, he had drawn within about five lengths of the lead. Patiently handled on the turn by Julien Leparoux, the 7-2 chance followed the move of Oscar Nominated off the final corner, waited for that runner to clear and was shifted off heels before setting sail for home. Displaying his customary turn of foot from there, Divisidero quickly rallied towards the front, dueled briefly with a stubborn Beach Patrol inside the final furlong and found the wire first.

“On this kind of track, you want your horse to be relaxed and make a nice run,” the winning jockey commented. “Because the pace was so slow, we all bunched up so we were not too far behind. When I came out [for my run], he kicked home super. He ran a really big race today.”

Sidelined off a fifth-place effort behind Flintshire (GB) (Dansili {GB}) in the GI Manhattan S. last June, Divisidero was a late-on-the-scene third in Gulfstream's GIII Fort Lauderdale S. to begin his 5-year-old season. A wide-trip third in the GI Gulfstream Park Turf H. Feb. 17, he just failed in a stakes-quality allowance at Keeneland Apr. 9.

Pedigree Notes:
Divisidero's unraced dam, a $65,000 purchase by Ken and Sarah Ramsey out of the 2008 Keeneland January sale, was bred to the couple's Kitten's Joy in 2011 and was sold to Hinkle Farms for $150,000 at the Keeneland November sale carrying the future multiple Grade I winner. The mare had already produced Divisidero's full-brother Kitten's Kid, runner-up in the GIII Pilgrim S. at two in 2011. Divisidero, whose third dam produced MGSW & MG1SP Zindabad (Fr) (Shirley Heights {GB}), is kin to the 2-year-old Bernardini colt Gunnison and a yearling filly by Orb. Madame du Lac was most recently bred to Medaglia d'Oro.