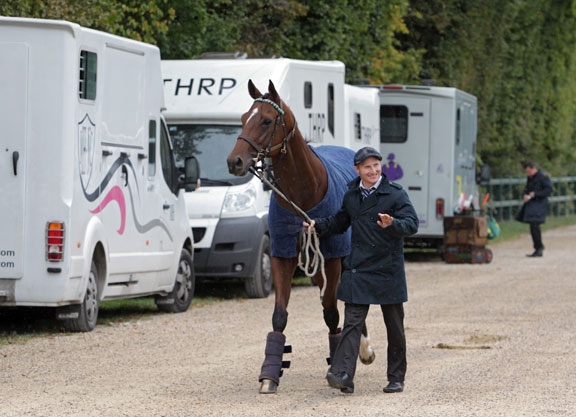 Travel delays between the UK and EU could occur in early January | racingfotos.com

Ahead of the start of the 2021 breeding season, owners and breeders have been warned to avoid to avoid transporting horses between the UK and the EU in the first few weeks of January immediately following the expiry of the Brexit transition period.

A statement issued on Tuesday by the Thoroughbred Industries Brexit Steering Group, which is made up of representatives of the British Horseracing Authority, Thoroughbred Breeders' Association and Weatherbys, advised against horse movement in the early part of the new year “unless absolutely necessary”.

It continued, “With less than seven weeks to go before the transition period expires, there will be significant changes to how horses move between the UK and the EU from 1 January, irrespective of whether a Free Trade Agreement is signed.”

At present, clarification is still being sought by the group on Britain being granted third country status for animal health purposes, as well as authorisation for British horse transporters to operate in the EU and vice versa, and, crucially, recognition of the General Stud Book, which identifies Thoroughbreds and permits their movements.

The statement read, “Even in the event of agreements on these key areas for British racing being confirmed in the coming weeks, the Thoroughbred Industries Brexit Steering Group is of the view that there will be additional friction in moving thoroughbreds through key ports from 1 January, with the potential for initial disruption.”

Following confirmation of a Free Trade Agreement between the UK and the EU, further clarification will be required in regard to a potential replacement of the current Tripartite Agreement which governs movements of Thoroughbreds between Britain, Ireland and France.

Julian Richmond-Watson, chair of the Thoroughbred Industries Steering Group, said, “We know that some people want to make plans for the New Year, but the picture will remain unclear until we know the terms of any new agreements between Britain and the EU.

“Even if there is an overarching trade deal, we will still need specific arrangements to be agreed covering the movement of thoroughbred horses.

“If industry members want to avoid the risk of delays or disruption, we advise them not to schedule movements in the first two weeks of 2021.

“Our message right now is 'Stand By, Change is Coming'. We would ask participants to keep up to date with the latest information regularly via the Brexit page on britishhorseracing.com and await direct communication from their membership body once we know the details.

“We continue to work closely with Defra and all other relevant UK government departments, who are well-informed about the needs of the racing and breeding industries. We are also in regular contact with our counterparts in Ireland and France and other EU jurisdictions.”