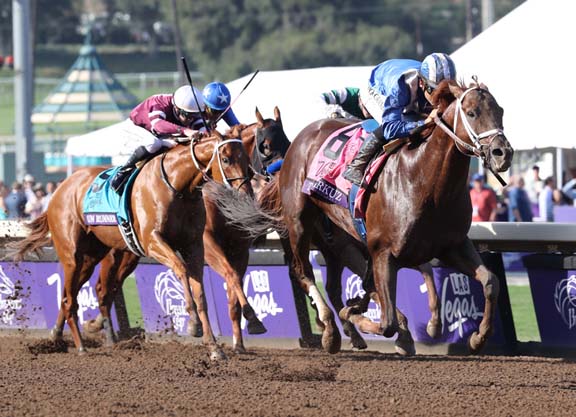 Shadwell Stable's GI Breeders' Cup Dirt Mile hero Tamarkuz (Speightstown–Without You Babe, by Lemon Drop Kid) has been retired and will stand at Shadwell Farm in Lexington, Kentucky, the farm announced Monday. His fee has been set at $12,500.

Bred by John Gunther in Kentucky, the chestnut was purchased for $325,000 out of the 2011 Keeneland September Yearling Sale, and took the 2015 G2 Godolphin Mile, G3 Firebreak S. and G3 Burj Nahaar at Meydan before being transferred to the care of Kiaran McLaughlin in the U.S. last season. Tamarkuz added runner-up efforts in the this term's GI Forego S. at Saratoga and the GII Kelso H. at Belmont this August in advance of his Dirt Mile score. In total, Tamarkuz retires with a record of 20-8-4-0 and earnings of $1,840,444.

“We knew he had potential,” said McLaughlin. “He's very well balanced and should make a nice stallion.”

He is available for viewing during the Keeneland November Breeding Stock Sale, with Shadwell providing a shuttle service. Please call (859)588-7560 to make arrangements.