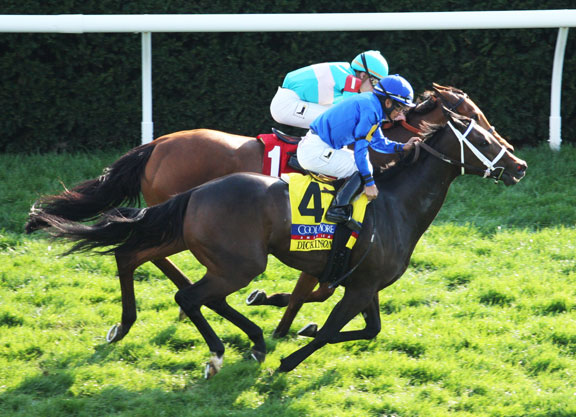 Kiaran McLaughlin was born in Lexington, attended the nearby university and sets out each spring and each fall to make an impression when the racing is on at Keeneland. Saturday, on behalf of his chief client Sheikh Mohammed bin Rashid al Maktoum's Godolphin, McLaughlin registered a memorable four-timer. For good measure, each was by a current or former Darley stallion. Tasteful (Street Cry {Ire}) became a 'TDN Rising Star' with a stirring maiden win in race four, while Zennor (Medaglia d'Oro) doubled up in race six. 'Rising Star' Watershed (Bernardini) made the grade in the GIII Ben Ali S., but the day's best came from Dickinson (Medaglia d'Oro), who overcame traffic at the furlong grounds and ran down favored Lady Eli (Divine Park) in the GI Coolmore Jenny Wiley S. “For Godolphin, it's a great day, and she's just a nice filly,” McLaughlin said. “Just unbelievable to win four at Keeneland, especially ending on a Grade I.”

Dickinson hit the ground running and was prominent passing under the line for the first time, but Catch A Glimpse (City Zip) showed the most speed and when Illuminant (Quality Road) improved her position into second, Dickinson was gifted the box seat from third with a circuit to travel. Lady Eli, having her first run of the year and first since her runner-up effort in the GI Breeders' Cup Filly & Mare Turf, tracked Dickinson from fifth while firing up just a bit beneath regular rider Irad Ortiz Jr. With Paco Lopez riding for luck from the inside rail, Dickinson was short of room as she went for a gap between Catch a Glimpse and Illuminant, and that allowed Lady Eli to quicken past and into a clear lead with her typically strong turn of acceleration. Dickinson, checked first off the heels of the front-runners, was forced to wait for Lady Eli to clear, but once pointed towards daylight, drew upon her superior race fitness to pull the minor upset as the only other horse in the markets.

“I had a little trouble,” Lopez offered. “I wanted to go through on the rail and it opened up a little bit but I couldn't get through. When the other horse [Lady Eli] passed me, we got room and I still had a lot of filly.”

McLaughlin indicated that Dickinson was likely to remain at a mile for the GI Just A Game S. June 10, a race won by the Medaglia d'Oro fillies C. S. Silk (2011) and Coffee Clique (2014).
A two-time winner on the main track from her first eight trips to the post, Dickinson had reinvented herself as a turf filly of potential importance with a pair of allowance wins at the tail end of 2016 and victories in the GIII Suwannee River S. and GII Hillsborough S. in her two most recent appearances.

Pedigree Notes:
Dickinson is the 17th individual Grade I winner for Medaglia d'Oro and second produced by an A. P. Indy mare (Plum Pretty). Medaglia d'Oro was represented by his 100th black-type winner overall when 'TDN Rising Star' Ever So Clever took out Friday's GIII Fantasy S. Dickinson is the first stakes winner produced by Godolphin's Little Belle, winner of the 2008 GI Ashland S. at Keeneland and runner-up to Proud Spell (Proud Citizen) in that year's GI Kentucky Oaks. A full-sister to SW Dubai Dancer, Dickinson is a maternal great-granddaughter of blue-hen Flagbird (Nureyev), whose half-sisters include Grade I winners Prospectors Delite (Mr. Prospector), the dam of Horse of the Year Mineshaft (A.P. Indy); and Runup the Colors (A.P. Indy), whose son Revolutionary (War Pass) won the 2013 GII Louisiana Derby. Dickinson hails from the further female family of the ill-fated GSW Newfangled (Ire) (New Approach {Ire}) and Godolphin's 'TDN Rising Stars' Bay of Plenty (Medaglia d'Oro, SW & GSP) and Fortify (Distorted Humor, GISP). While there is no further produce to report for Little Belle, the now 18-year-old Dubai Belle is the dam of a 2-year-old colt by Medaglia d'Oro and foaled a filly by Medaglia d'Oro earlier this year.