Gunnevera 'Dials' It Up a Notch in FOY 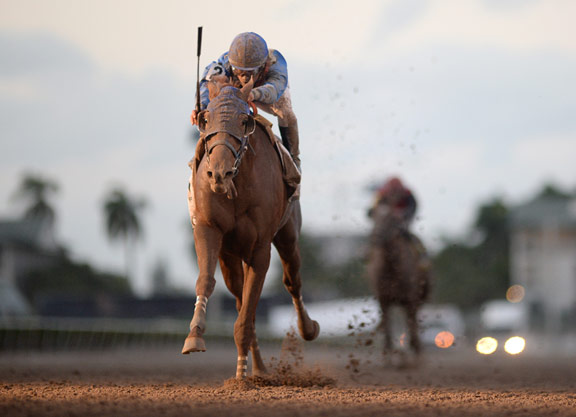 Peacock Racing Stables' Gunnevera (Dialed In) uncorked an impressive late rally to upset heavily favored “TDN Rising Star” Irish War Cry (Curlin) with a 5 3/4-length victory in Gulfstream's GII Xpressbet Fountain of Youth S. Saturday. In no hurry early, the 4-1 shot was bumped by his inside neighbor heading into the first turn and trailed the field early as MSW Three Rules (Gone Astray) ticked off an opening quarter in :23.43 with Irish War Cry close right on his tail. Advancing three wide to be seventh as the leaders clocked a half in :47.18, Gunnevera hit another gear at the five-sixteenths pole, mirroring the powerful rally of MGISW Practical Joke (Into Mischief), and that duo drew even with the pacesetting Three Rules turning for home. That battle was quite brief, however, as Gunnevera kicked it into overdrive in the stretch, charging clear to earn 50 points towards the GI Kentucky Derby and push his earnings over the million dollar mark with a dominant success. Practical Joke bested Three Rules to be second and Irish War Cry faded to seventh.

“I feel very happy,” said winning trainer Antonio Sano, who named the Apr. 1 GI Florida Derby as his charge's next start. “The last race he lost the race because he got bumped [on the turn into the stretch]. This was different–more horses, different speed. I thought 100% that he would win today.”

Sano continued, “[Javier] Castellano never won the Kentucky Derby. For me, it's the first time [having a contender]. This is the year. I'm very proud of my team and Peacock Racing. I'm very emotional.”

“There was a lot of speed in the race and the way it set up was perfect,” Javier Castellano commented. “That's what I was looking for. He's the kind of horse where you have to make one run. You can't chase the pace, because you're not going to finish. I tried to do that a little bit last time, but I learned my lesson. I was able to learn and move forward and it paid off today.”

Graham Motion, trainer of beaten favorite Irish War Cry, said, “[Jockey Joel Rosario] felt he was in a good enough spot. I wish he had maybe settled a little more off the pace perhaps, but I don't want to make excuses. He looked like he was going pretty nicely. I can't really say what happened, whether he bounced or not. He ran an awfully big race last time. He looks fine. My instincts and first reaction is that possibly I ran him back too quick. It's hard to know. He's done so well between races.”

Click here for a feature on winning trainer Antonio Sano.

The winner, who is the most recent produce out of his dam, is from the first crop of 2011 GI Florida Derby hero and 2016 leading freshman sire Dialed In. Gunnevera is the first, and so far only, graded stakes winner sired by the Darby Dan resident, but Dialed In is also responsible for the stakes-winning fillies Ruffenuff and Ms Locust Point.