Dewhurst Glory For Too Darn Hot 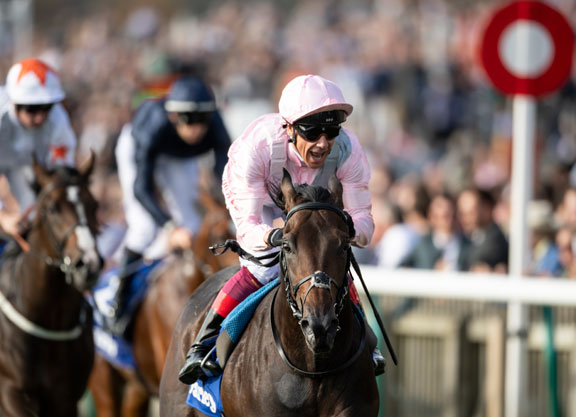 Fears in the Lloyd-Webber-Gosden camp that the unseasonable balmy temperature would undermine Too Darn Hot (GB) (Dubawi {Ire}) grew with every increase in fahrenheit ahead of Saturday's G1 Darley Dewhurst S., but the sensational TDN Rising Star duly proved impervious to any obstacle to achieving juvenile champion status. With Newmarket basking in the weird heat, it was expected that the dynamism that had marked his wins on rain-eased ground in the Sept. 1 G3 Solario S. and Sept. 15 G2 Champagne S. would be dumbed down in the strongest encounter of his brief career. For a period of a furlong or so as the track's most extreme undulations came into play, the even-money favourite did look in bother but Frankie Dettori kept looking for momentum to power out of the “dip” and the homebred responded with a surge to record an ultimately emphatic 2 3/4-length defeat of Advertise (GB) (Showcasing {GB}), with Anthony Van Dyck (Ire) (Galileo {Ire}) 1 1/4 lengths away in third. Dettori, who like trainer John Gosden was winning this prestige event for the first time, was left in no doubt as to the winner's merit. “He's an amazing horse and among the best I've ridden,” he said. “He's got everything, a good cruising speed and really quickens. He's got pace and is bred to stay. He's had three easy races in his life and he was getting knocked about in the middle and ran in snatches, so for a minute I thought I would struggle. Then the turbo kicks in and on he goes–in the end I was able to ease him down.”

If things had appeared to come easy to Too Darn Hot since his introduction at Sandown just over two months ago, it is only due to his inherent ability as he had a difficult trip to overcome in the Solario and in the Champagne. He could easily have led from the outset in any of his outings and that was the case again here but Dettori was exercising the usual heavy restraint as he tucked the bay in behind the Ballydoyle-carved tempo. Stuck in a pocket until the ruthless pace began to draw out the field, he was flat-footed when asked to put in a major effort running downhill and was not making the customary smooth progress as Advertise and Anthony Van Dyck pressed on in front. As soon as he became balanced, there was the same overwhelming finale on display and he was really going somewhere at the line to leave proven group 1 performers behind and put 8 1/2 lengths between him and the talented duo Sangarius (GB) (Kingman {GB}) and Kuwait Currency (Kitten's Joy).

“They've gone a good pace but he was on the metal, so Frankie had to cover him up and he did that beautifully,” John Gosden commented. “The interesting thing was when he was brought out he was not comfortable in the dip and then got balanced and flew. It is firm and he needs good ground, but that's his class showing. Seven is sharp enough for him, but he's blessed with an awful lot of speed and he seems to be taking more after his father. He's a great guy and a wonderful character–he's with you 100 per-cent. It has to be the 2000 Guineas now. It's a little unusual to go group three, group two and group one, but he's shown his class and this is a bit of a dream come true for Madeleine and Andrew.” Gosden also has Calyx (GB) (Kingman {GB}), who has been absent since beating Advertise arguably as impressively as Too Darn Hot did here back in June at Royal Ascot. The proximity of the runner-up was not lost on the Clarehaven maestro who added, “They have never worked together, but Calyx is the only other one I have who compares and he is in great form at the moment–he's just trotting and playing about and he'll be back next year. It'll be wonderful if they could meet in the spring and we hope they will. I expected that first four, Advertise has run a fabulous race and Aidan's wants a mile now.”

Martyn Meade was far from downheartened despite the defeat of Advertise and said, “I'm really pleased that he got the seven furlongs–I was a little bit apprehensive about that, but he's acquitted himself brilliantly. He lost his action going into the dip and then run on again, so it was a really good performance and the Guineas is on the cards. It has always been at the back of my mind, but I had to wait until I knew he'd get a mile so I'll train him for that now.”

Dar Re Mi (GB) (Singspiel {Ire}), who got the Lloyd-Webbers' bandwagon rolling as she emerged as a high-class performer 10 years ago, had already been front and centre this week with her yearling full-brother to Too Darn Hot selling for 3.5 million gns at Tattersalls. The winner had been due to go there 12 months ago, but for once luck was on the side of his owner-breeders as what was perceived as an unfortunate setback at the time turned out to be one of those welcome twists of fate. Dar Re Mi was as strong a middle-distance stayer as her pedigree suggested she would be, but her daughters also by Dubawi, So Mi Dar (GB) and Lah Ti Dar (GB) have proven contrasting types. The former had genuine 10-furlong speed and probably would have been stretched going further, while the latter was staying on to great effect at the end of the extended 14-furlong trip of last month's G1 St Leger. Both were denied runs in a British Classic–the Epsom Oaks in their case–due to training complications and it is up to Too Darn Hot to snap that trend back here on the first Saturday in May. He may have another Dubawi in the way there if Godolphin's Quorto (Ire) makes the engagement. Dar Re Mi's 2018 filly is again by that sire, who has come to the fore in a year where he has challenged the great Galileo with more resilience than ever.