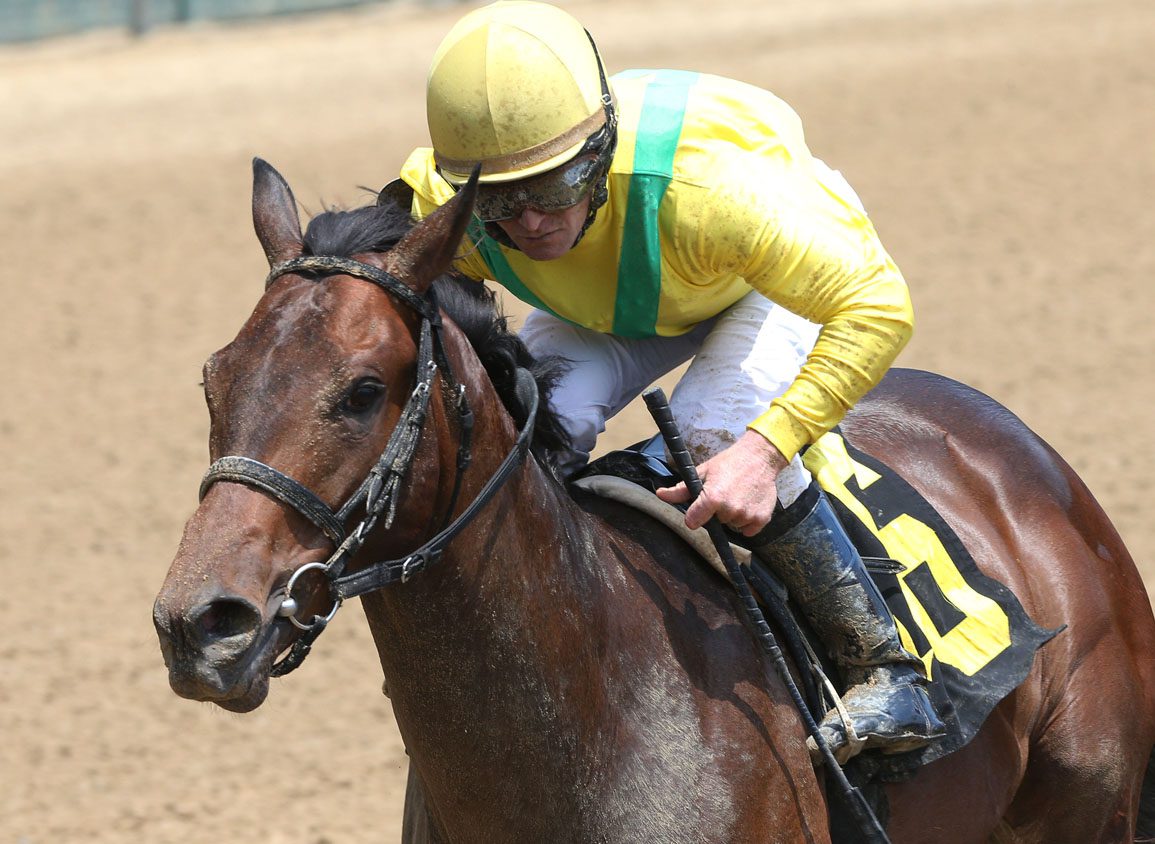 When Jack Goldthorpe and Ciaran Dunne came up with the Dew Sweepers partnership, the plan was always to buy yearlings, try and get them to Royal Ascot, and then sell them all in the Fasig-Tipton July Horses of All Ages Sale. On Monday, the final step of their plan will go into action when seven juveniles go through the ring in a complete dispersal through the Grovendale Sales consignment.

“Ciaran went to Royal Ascot last year and said, 'Goldie, this was some sort of fun. We've got to do it.' I said, 'Sounds good. How are we gonna do it,” Goldthorpe said. “The plan was to buy yearlings and try our damnedest to get one to Royal Ascot and, at the end of Royal Ascot, take these horses to the sale. It was a different style pinhook. We were going to race them as opposed to blowing them down the lane [in a 2-year-old sale]. We were going to race them, show what we have and give them to a trainer that doesn't beat them up, Rusty Arnold. That way, there's a lot of meat left on the bones when somebody else wants to come by them.”

Dew Sweepers not only got one horse to Royal Ascot, they got two, Late September (Munnings) (Hip 550) and Grand Oak (Ire) (Speightstown) (Hip 521). A well-beaten fourth after hopping at the start of his main track debut at Keeneland Apr. 20, Late September earned his diploma next out on dirt at Churchill exactly one month later. Sent across the pond, the $60,000 KEESEP buy failed to fire when trying the grass at Royal Ascot, finishing 17th in the G2 Coventry S. June 14.

Grand Oak checked in second when unveiled on the dirt at Keeneland Apr. 21 and wired the field for a 4 1/4-length graduation when switched to the lawn at Churchill May 20, the same day Late September broke his maiden. Unfortunately, the $105,000 KEESEP purchase did not fair much better than her stablemate at the Royal meeting, checking in 18th in the G2 Queen Mary S. June 15.

Despite those poor finishes, the Dew Sweepers thoroughly enjoyed their Royal Ascot experience, according to Goldthorpe.

“It was awesome, even though the horses ran like shit,” the founder of Lexington Equine Insurance said. “We had a blast and we checked the box. The partners were like, 'Wow, what an experience.' We have to give a lot of credit to Royal Ascot. They treated us like we brought Secretariat over there. They rolled out to red carpet. They are so happy to have the Americans come over there and participate in their greatest show on Earth. It made us feel great.”

The Dew Sweepers is comprised of six partners and they made a total investment of around $700,000. They acquired seven yearlings, four fillies and three colts, shopping at both Keeneland and Tattersalls.

In addition to Late September and Grand Oak, their dispersal includes:

“These horse can take the new owner to Royal Ascot next year; to Kentucky Downs and run for all that money; or they can take them to the Breeders Cup,” Goldthorpe said. “That gives them an opportunity and I think they will bring a pretty good bunch of money because of that.”

As a complete dispersal, all seven juveniles will be there to sell, as per the partnership's contract.

“This was in a contract, that they will all disperse in July,” Goldthrope said. “This was the first time trying it. Some are regretting that we have the July end date and some are happy that we do and we completed the task as the contract set. Now will we adjust it for next year? We will probably tweak it a little bit. The success was giving us second thought. There are more races left in these horses and we knew there would be. I didn't know what kind of quality we would have, but we've got a quality bunch of horses going over there.”

Just because this first class of purchases is set to sell, does not mean the Dew Sweepers are done. They plan to be active at the yearling sales again this fall.

“We will be buying horses, absolutely,” said Goldthorpe. “Whether we buy them and point towards Ascot or something else. Maybe a few bottles of wine and a dinner will decide that. We're going to be invested in the game. The partners had so much fun. This not their last venture. There were some veterans in there that had to share, but for the most part, these were new people in an effort to get them excited about the game. And let me tell you, they are excited! We're not going to let them go. We're going to buy horses. We're going to sell horses. We're going to race horses, even may venture into a mare or two for the guys whose wives want to see babies being born. So it's just a very close-knit group of guys that are financially stable enough to play the game. We got lucky to put them all together and have success the first year. You won't see the end of the Dew Sweepers!”

The Fasig-Tipton Horses of All Ages Sale kicks off Monday at 3 p.m. and will include both racehorses and broodmares. It will be followed by the Fasig-Tipton July Yearling Sale Tuesday.