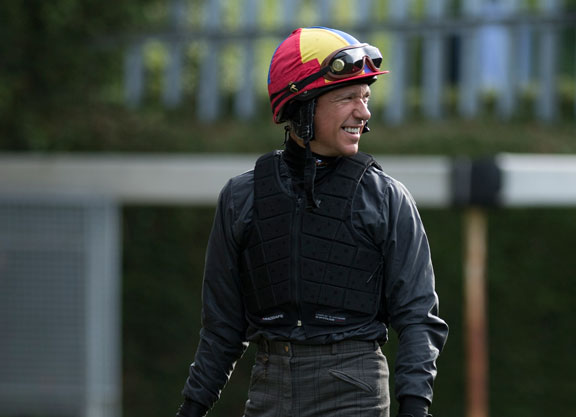 Frankie Dettori has been booked to ride Phoenix Thoroughbred and Khalid bin Mishref's Gronkowski (Lonhro {Aus}) in next Saturday's $20-million Saudi Cup and the Mar. 28 G1 Dubai World Cup, in which Gronkowski was runner-up last year by a nose.

“It's an amazing ride to get,” said Dettori. “I'm excited to ride him [in Saudi] for two reasons. First, he doesn't have to travel that far from Dubai and I think the track will suit him. It's probably the best dirt track I've ridden anywhere in my life. It's got the longest straight; he'll relish that and is the type of horse that will enjoy the Riyadh track.”

The 5-year-old Gronkowski hasn't won since taking a listed stake at Newcastle at three, but he has put in some memorable performances, including a second to Justify (Scat Daddy) in the GI Belmont S. and his Dubai World Cup finish last year under Oisin Murphy. The bay was third in Meydan's Listed The Entisar on Dec. 5 and filled the same position in the G2 Al Maktoum Challenge R2 on Feb. 6 under Mickael Barzalona.

“He had his final prep run the other day and when you see the bare form you might think he's not run so well,” Dettori said. “But I spoke with his trainer, Salem bin Ghadayer, and he said it was just a stepping stone for the big day and that he wanted me to ride the horse in both races, so I'm super excited.

“He likes the dirt, he's rated 120 so he's no slouch and he doesn't have many miles on the clock. I've been very

lucky for Phoenix Thoroughbreds so let's hope the luck continues.”