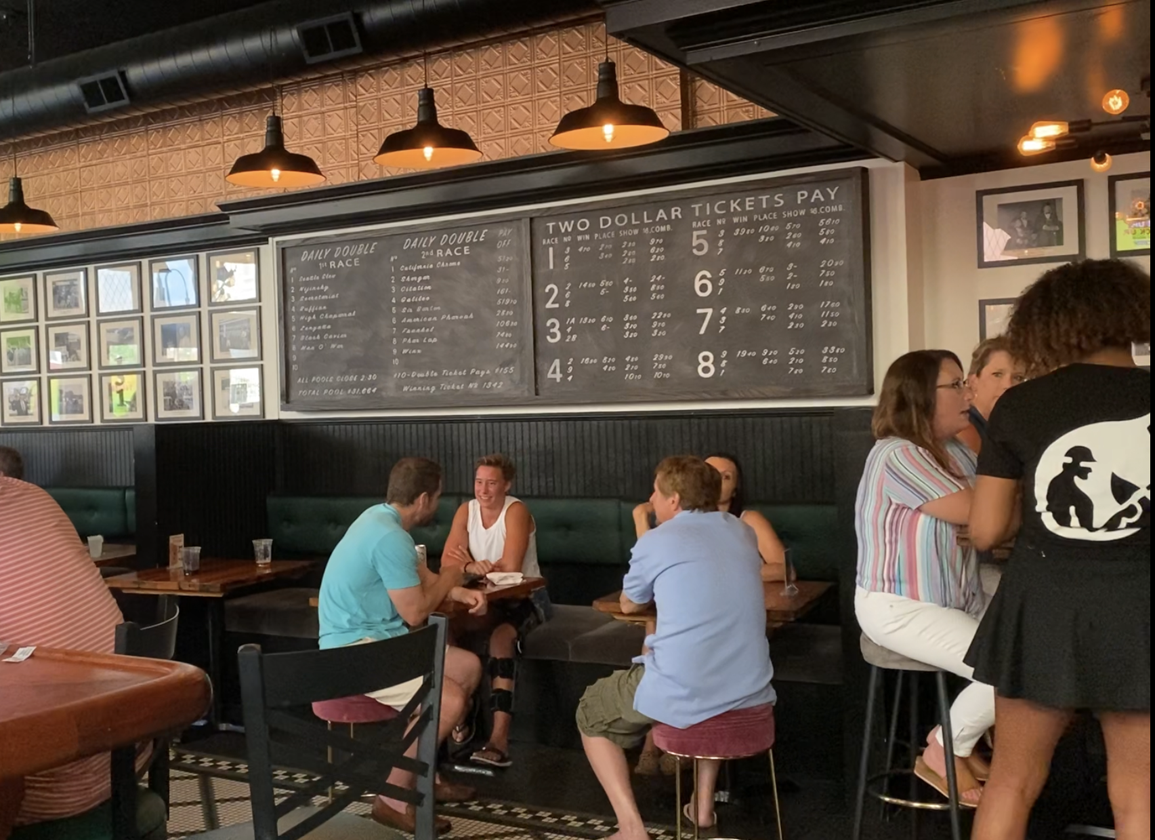 Read on for our visit with the owner of Lexington's bustling Irish gastropub Horse and Jockey, plus visits to some of downtown's most buzzed-about new spots.

The 2021 Keeneland September Yearling Sale is just around the corner and soon, buyers from around the globe will be scouring the expansive sales grounds in search of their next star. Such intense scrutiny of the thousands of impressive yearlings at the annual auction is sure to work up an appetite, and thankfully the culinary scene in Lexington is vibrant with a diverse group of restaurants that can appeal to any palate.

For many visitors, it will be their first time in town in two years, so we paid a visit to some of the newest and most popular restaurants downtown to give an early taste to sales-goers who might be looking to discover something new during their time in Lexington.

Horse and Jockey -15 Minutes from Keeneland

Horse and Jockey Pub and Kitchen, a traditional Irish gastropub, is located in the heart of downtown Lexington. The restaurant has quickly garnered positive reviews amongst the local horse racing community and the racing-themed decor further lends itself to that clientele.

Paul Murphy, a native of Scotland who spent most of his childhood and young adult life in Ireland, moved to New York 20 years ago. He and his partner, Jimmy McSweeney, had a dream of starting up a restaurant in Lexington.

They found an old night club on Main Street that looked promising, but when they came to town for a visit, quickly realized there was no proper place to add a kitchen. As they were strolling through the streets of downtown afterwards, they came across the building now known as Horse and Jockey.

“The place had just closed,” Murphy recalled. “There was paper on the windows but I looked in and said, 'Wow, this could make a nice speakeasy-type place.' So we got in touch with the landlord and he walked us through the next morning. It was pretty much a done deal right there.”

As for the name, while obviously reminiscent of the famed Horse and Jockey Hotel in Tipperary, Murphy said when he moved to Queens two decades ago, the first bar in his neighborhood that he visited was also called Horse and Jockey.

“Everybody can understand where it's coming from,” he explained. “We figured there were already a couple of Irish bars downtown, but none of them had any food. So we figured that would be our niche-a traditional Irish menu.”

After four months of renovation, Horse and Jockey opened its doors in January of 2020. Five weeks later, they were forced to shut down due to the Coronavirus pandemic. But the new eatery came back with a vengeance this June.

“It has been so busy,” Murphy said. “Luckily we have a good staff and a lot of them stayed on. It was a tough year for everybody and thankfully the people downtown and the local community have come in and it's been great. We've made a lot of friends.”

Murphy said some of their menu's best-selling items include fish and chips, bangers and mash and curry cheese fries. Another popular dish, Shepherd's Pie, is made daily by Murphy's wife. 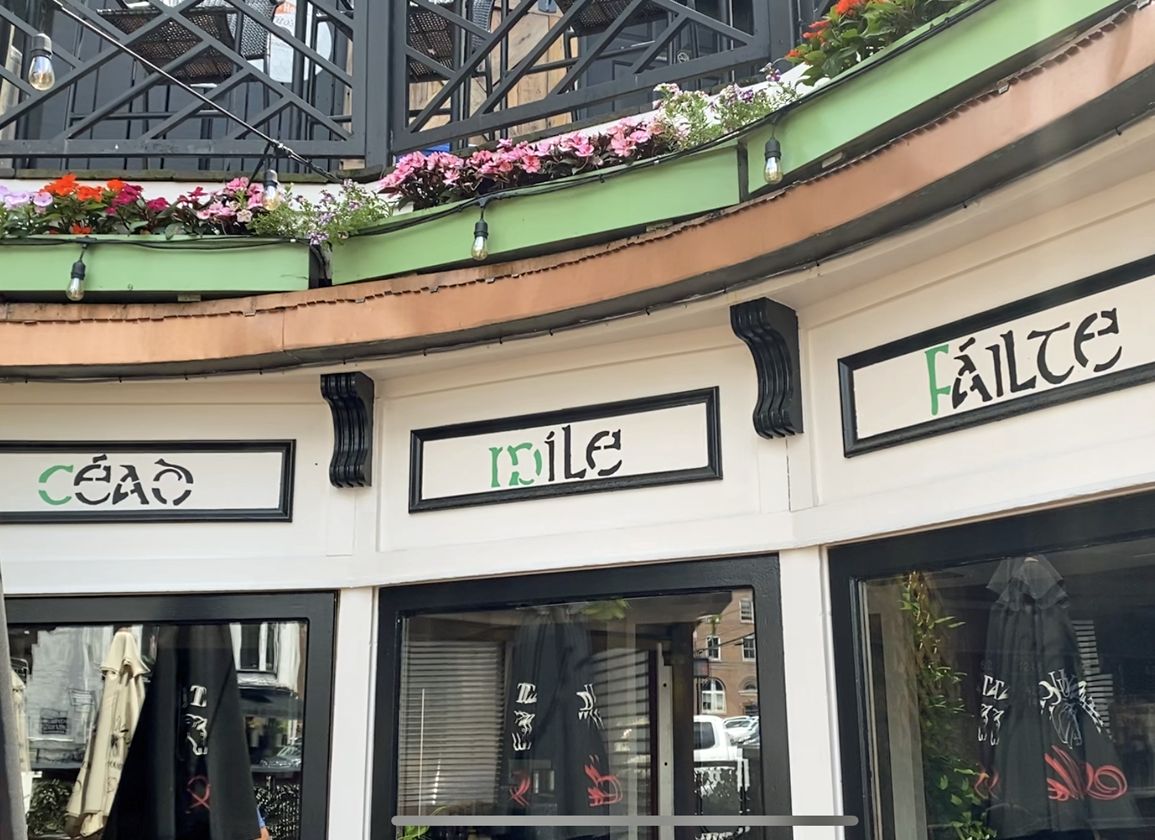 “It's as good as you'll get back in Ireland,” he said proudly. “We also do a burger with Irish bacon on it. A lot of people ask why we don't have American bacon, but this is our thing. We're trying to stick to our traditional menu.”

First-time guests have plenty of options upon visiting. Aside from the main indoor dining area, the restaurant also has an outdoor patio as well as an upstairs covered patio that features both a bourbon and a gin bar.

The menu offers a wide array of drink selections, from beers on tap to an expansive wine list and various cocktails. All of the herbs used in the drinks–mint, rosemary, lavender and basil–are grown in-house.

“The overall atmosphere on any night is busy,” Murphy said. “We have live music on Thursday nights and we have a big screen where we will show horse racing or whatever sporting event is on. There's a good buzz around the place. Everybody enjoys themselves.”

The first thing that catches any guest's eye, according Murphy, is the artwork.

Before the Horse and Jockey opened for business last year, Murphy and his partner hired Kate Lossen to help design the space. Lossen was also the curator of the collection from famed Eclipse Award-winning photographer Tony Leonard. She provided the photographs that now grace nearly every inch of wall space at Horse and Jockey.

“I think we have maybe 300 and something pictures, but they're all from Tony Leonard,” Murphy said. “Some of them are really, really unique, like we have a picture of Secretariat sitting down. There are even pictures from Ireland that he took. They're all dated and have a description of who is in the photo, so a lot of horse people come in and want to take a look.”

Other popular photos from the collection include a shot of Leslie Combs with stallions Swaps and Nashua at Spendthrift Farm, Mary Lou Whitney in the paddock at Keeneland, and an enlarged photo from 1952 that covers an entire wall and depicts mule-drawn sledges working up the track at Keeneland.

“Steve Cauthen's brother was here and said he thought there might be a picture of him,” Murphy recalled. “We looked and found a picture of Steve when he won an Eclipse Award and his brother was in it too. That was really unique, but a lot of people from the horse business come in. People from Coolmore, Darley, Shadwell, all the big horse farms, they come in to watch the racing and have Irish breakfast. They'll chat amongst themselves and they can remember everything about the horses in the pictures-when they were foaled, how much they sold for and who trained them.”

Murphy said that Breeders' Cup week last November was a busy time at the restaurant with visits from Frankie Dettori as well as some of the owners of Classic winner Authentic (Into Mischief).

“The good think about Lexington is that there's a lot of different types of restaurants that you can go to, but everybody has their own thing, their own niche,” he said. “Our niche is traditional Irish food. For people in the horse business coming into town who stop by, they'll first be intrigued by the pictures and then they'll all know each other and start talking about horses, which is great. I love listening to them.”

Several other new spots have launched in downtown Lexington recently, many of which offer a bit of horse racing flare.

Frank and Dino's -16 Minutes from Keeneland

A racehorse owner, trainer and breeder by day and a restaurant owner by night, Carlo Vaccarezza is a man who wears many hats. The native of Italy has lived in the U.S. for over half a decade now, making a name for himself in the country with homebred Little Mike (Spanish Steps), winner of the 2012 Breeders' Cup Turf, among others.

While his passion is horse racing, Vaccarezza is also involved in the restaurant business. Frank and Dino's, a nod to Frank Sinatra and Dean Martin, opened its first location in Boca Raton, Florida. This July, a second restaurant is set to launch in Lexington.

With an atmosphere aimed to be reminiscent of Italian-American culture in the post-war 1950s, guests can expect a lively, classy setting where they can sit back and enjoy authentic Italian cuisine. Along with an array of pasta entrees, the menu will also feature Italian fish and chicken dishes, salads and appetizers. 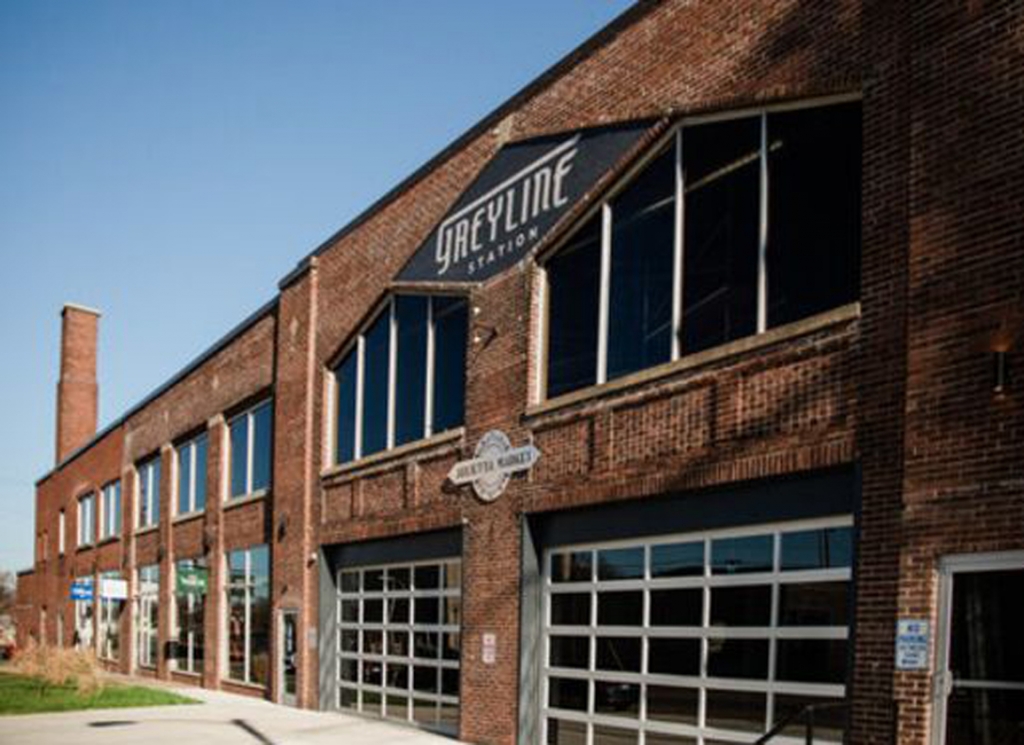 In the 1940s, the Greyline Station building was home to the headquarters for Southeastern Greyhound, Lexington's largest private employer. | Keeneland

Built in 1928, the 65,000 square foot building now known as Greyline Station was once the company headquarters for Southeastern Greyhound Lines. The structure has been mostly vacant since 1960 and was added to the National Register of Historic Places in 2014. Four years later, the complex was given a makeover and modernized into what is now Greyline Station.

The building, now transformed into Lexington's first public marketplace, is home to dozens of restaurants and shops as well as an event space. Popular dining spots in the complex include The Breeze Wine Bar, which features international chocolates along with wines and spirits, North Lime Coffee and Donuts, a well-loved stop for Lexington residents, Porterhouse BBQ, Rise Up Pizza and more. A 'sip and stroll' license in the building allows visitors to grab a drink before exploring the diverse group of merchants. 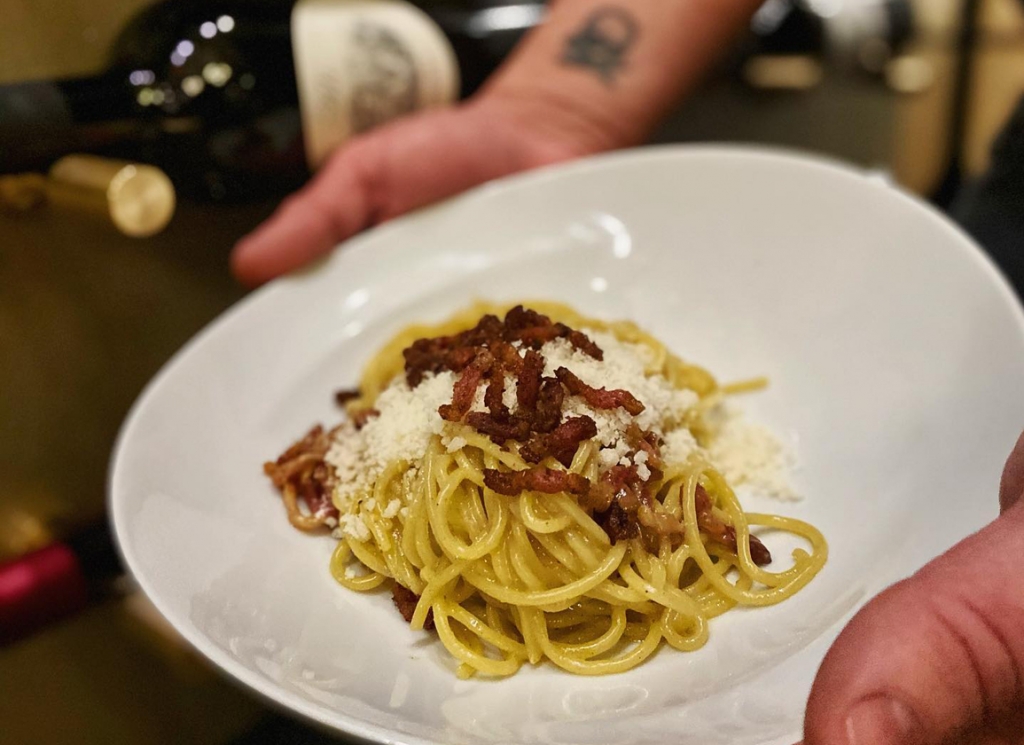 Quality is the word of the day at ItalX, where the menu is inspired by Italy's emphasis on simple, fresh, quality ingredients. Everything offered is made in-house daily-from hand-made pastas to velvety desserts. ItalX, housed in the downtown City Center development, was officially launched last October by award-winning chef and Lexington native Jonathan Lundy alongside partner TJ Cox.

Popular dishes include the Pizza Fritta appetizer with oven-roasted tomato, basil and burrata, the Candele Cacio e Pepe entree, made with toasted black pepper and Pecorino Reggiano and offered with or without truffles, and of course for dessert, Tiramisu al Marsala. An extensive wine selection is housed in a temperature-controlled wine room. 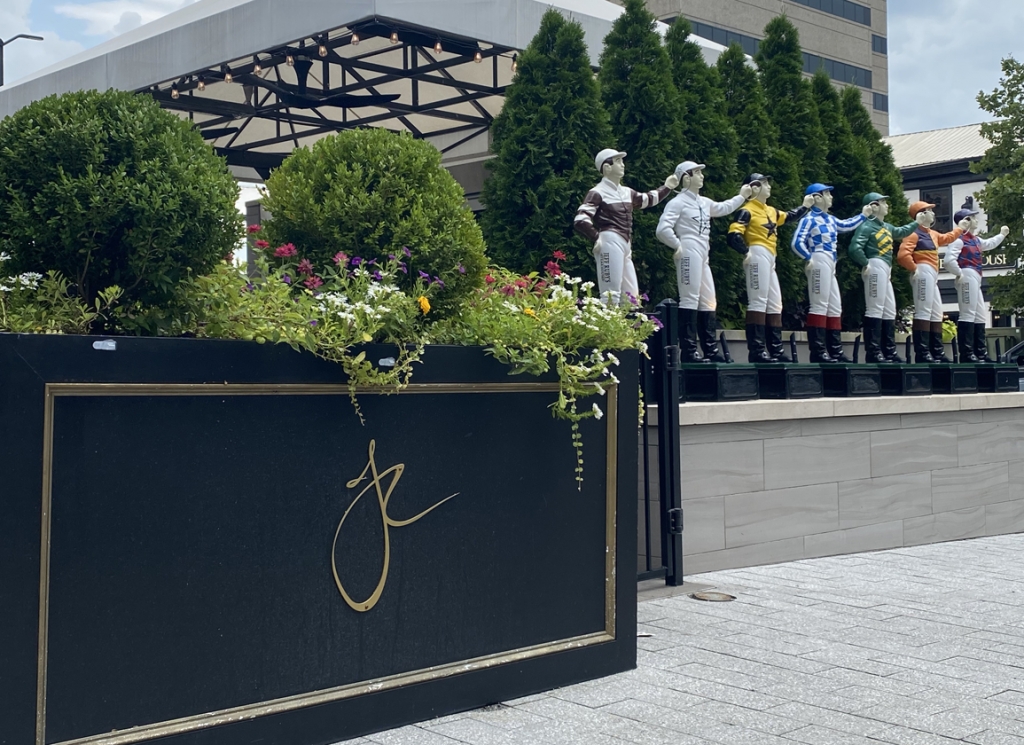 The line of lawn jockeys outside of Jeff Ruby's Steakhouse displays many well-known and prominent silks. | Katie Ritz

Jeff Ruby's Steakhouse opened its highly-anticipated Lexington location in the spring of 2019. With restaurants already established in Cincinnati, Nashville, Louisville and Columbus, the fine-dining company is regarded amongst food critiques for offering one the best steakhouses in the country.

A prominent restaurateur, Jeff Ruby is also known for his love of horse racing. He has been a partner in several graded stakes winners over the years and his company's logo is displayed on the pants of several top jockeys in the U.S.

Ruby was thrilled to launch his fifth location by pulling out all the stops to create a Lexington-themed atmosphere centered around bourbon, (Thoroughbred) breeding and basketball. A long line of lawn jockeys welcomes guests entering the establishment and a horseshoe-shaped bar sits in front of the stage that often features live music. Several signature rooms are graced with equine touches, including one private room specifically geared towards horse racing enthusiasts.

For more on where to stay, what to do and what's new in Lexington, click here.