Despite Many Hardships, Billy Turner Tries to Stay Optimistic 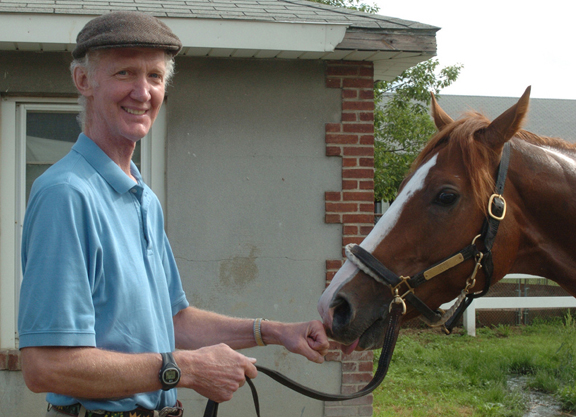 Seattle Slew's trainer left the racetrack in 2016, moved to Florida and settled in for what he had thought would be a quiet retirement. It may have started out that way, but in late April Billy Turner's life started to come apart. Living at the Ocala Jockey Club in Reddick, Florida, Turner suffered a freakish injury that caused him to break his neck. That was bad enough, but it was only one part of the story. While being treated in the hospital, it was discovered that he had prostate cancer and that it had spread to his bones.

But those same people are struggling to figure out how they can help Turner through the ordeal, particularly when it comes to his medical bills. Turner will need extensive medical help going forward, but doesn't have the money to pay for it. To help with the medical expenses, a friend and neighbor, Rick Wallace, has started a GoFund Me campaign for Turner, with a goal of raising $25,000.

“He needs a lot of help from everybody to try to get him back on track,” said Wallace, a well-known equestrian.

To keep busy, Turner would do odds jobs around the Ocala Jockey Club property and was mowing one day in late April when he ran over a branch. Turner said that it flew up and struck him in the area of his neck. His wife, Patti, believes the cancer weakened his bones and made them susceptible to breaking when Turner had the accident.

After successful surgery to repair his neck, Turner was released from the hospital last week, but the work to get him back on his feet is far from over. Now 80, he still needs extensive rehab and in-home care, which could go on for as long as six months.

“He's doing remarkably well and his mental state is surprisingly good,” said Patti Turner. “His injury was way more serious than just a broken neck. He was in rehab for four, five weeks learning to walk. He had a serious injury to his brain. His brain wasn't communicating with his body for balance and he even lost his ability to swallow. He has recovered from that. He can talk and eat. We started the GoFundMe campaign because he needs serious professional nursing care in the home to get over this hump. If he can get several months of really good care we think he can move forward.”

His needs are extensive, Patti Turner said. Her husband needs physical therapy. He still cannot stand up or walk, remnants of the brain injury he suffered, so he needs nursing care to get through even simple tasks and he needs a wheelchair. Patti Turner can only do so much.

Normally, medicare would cover medical expenses for someone of Turner's age, but his wife said he was scammed by a telemarketer who signed him up for a new insurance policy that negated his medicare. She said representatives of the new insurance company have said they won't pay for the doctors Turner is working with because they are “out of network.”

“It replaced medicare and they don't want to pay for anything,” she said. “It is a despicable organization. I need an advocate who can navigate this whole insurance thing.”

Turner is doing much better from a cognitive standpoint. Ask him about Seattle Slew and he can talk all day. He said he still follows racing on the big days and will be watching the GI Belmont S. Saturday, 43 years after he won it with Seattle Slew.

For now, the plan of attack is to work on his neck and brain injuries. Turner's doctors hope that those issues can improve to the point where they can focus in on the cancer. Wallace said the expectations are that Turner can live for at least two more years with the cancer.

“But they have to get him back up, walking and active again before they can work on the cancer,” he said. “If they can do that, they think he will have two good years.”

For his part, Turner is focused on the day to day. He could have two years left, he could have more. He will try to enjoy each one in the comfort of his friends and family, ready to get better and appreciative of what he has.