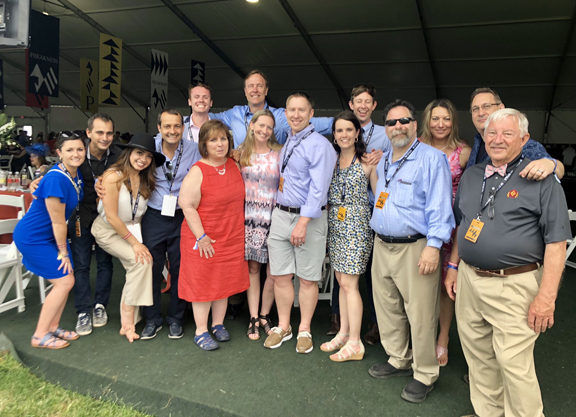 Just two years ago, Maryland-based horseplayer Rob Schutzman had only dreamed of owning a racehorse. But thanks to a little help from his wife Jill, he is now a part of the new ownership group Designated Hitters Racing, whose star 3-year-old My Friends Beer (Stay Thirsty) will start on Saturday in the first division of the GI Arkansas Derby.

Jason Scott and Dan Heim were the original founders of the partnership. “Jason grew up near Pimlico and Dan is from Ocala,” said Schutzman. “They both have a background in the industry. For me, it started out from a betting point of view.”

Scott and Heim connected through their kids attending the same elementary school, and the pair formed Designated Hitters Racing in 2018.

Schutzman joined soon after when his wife introduced him to the group. “My wife is the secretary at their kids' school. You know how wives talk, they just go around and BS. Husbands never really do that, you know,” Schutzman quipped.

Designated Hitters Racing now has almost a dozen members, with a good deal of baseball fans in the mix. “Jason is an Orioles fan, and I'm from New York so I'm a Yankees fan, but I kind of keep that quiet,” said Schutzman. “We like to get behind our horses, so we came up with the name Designated Hitters.”

The group got their first taste of the big leagues when Rookie Salsa (Two Step Salsa) took the Kentucky Juvenile S. last spring. “That was our first big stakes win,” recalled Schutzman. “That really gets your blood going.”

“I made it to Churchill for that win. I try to make it to all their races,” he said. “The horses do a lot of good for us so we want to support them, no matter where they're racing.”

Since its inception, the group has run in the money in 50% of their starts and has already collected three wins this year. Schutzman said the partnership's success has been due in no small part to trainer and advisor Jeremiah O'Dwyer.

“Jerry goes to every sale and we throw some ideas together,” said Schutzman. “He's done a great job picking out the good 2-year-olds. We don't spend a lot of money. We try and get horses that have good pedigrees and are at reasonable prices.”

One such fairly priced 2-year-old proved to be one of their best purchases. Last spring, O'Dwyer went to $25,000 at the OBS April Sale for a colt by Stay Thirsty and out of the Elusive Quality mare Slew's Quality.

“Nobody paid any attention to him because he was a May foal and was very undersized,” said Schutzman.

But the Designator Hitters team had a reason to give the colt a second glance. “He's a half brother to Shamrock Rose (First Dude),” Schutzman said. “Dan always liked her breeding and kept an eye on her after he had bet her to win the [GI] Breeders' Cup Filly and Mare Sprint at 25-1. So we took a chance on him because of his sister.”

Named in reference to the Dos Equis slogan, My Friends Beer never quite caught up in size.

“He's a little guy,” said Schutzman. “He weighs about 300 pounds less than the other horses in the barn. But he's tough and he loves to run. Even after he gets back to the stall after a race and cools off, he could run the next day. That's how he is. He just loves being a racehorse.”

Last year, the young 2-year-old ran in the money twice in four starts at Laurel Park. But as the calendar turned, Schutzman said the colt turned a corner as well, breaking his maiden on the first of the year. In March, he ran second in the Private Terms S. at Laurel. The decision to ship the horse to Oaklawn was made when Laurel Park announced a hiatus from racing Mar. 20.

“We took a chance and sent him to Oaklawn,” said Schutzman. “He finished up well in an allowance optional claimer [Apr. 11] against some really good horses, so that's what led us to this Saturday.”

After finishing third in that most recent start, My Friends Beer is sure to be one of the longer shots on Saturday, listed at 20-1 morning line. But the Designated Hitters team is no stranger to being the underdog.

“Rookie Salsa was 27-1 when he won the stakes at Churchill,” said Schutzman. “So, we don't get the money at the window, but we try and fight, and we're never out of it. My Friends Beer won't be any different.”

He continued, “Each race he gets a little more mature and we think he's bred to go the distance, so why not take a chance? The favorite [Charlatan {Speightstown}] is right to our left, so we can keep an eye on him. If he keeps his focus, we've got a shot.”

While the group is excited about their first Grade I entry, Schutzman said they can't help being a little disappointed they won't be able to cheer him on.

“We really wanted to go, but we're throwing some ideas around on how to watch,” he said. “We want to pay attention to the social distancing rules, but we're trying to figure out how we can all watch the race together. We're really excited about this.”

Not swayed by size, age, and past success or failure, the Designated Hitters team has full confidence in their “Most Interesting Horse in the World.”

“If he runs his race, he may be 10 lengths back at the top of the stretch, but he's got a lot of heart and likes to sneak up on you,” said Schutzman. “He never gives up. That's why he's finished in the money in six of his eight career starts.”

But at the end of the day, Schutzman said they are all over the moon for their colt to have reached this point.

“However he does is good with us,” he said. “We just want a safe trip for him and the jockey, and hopefully we can make some hay.”