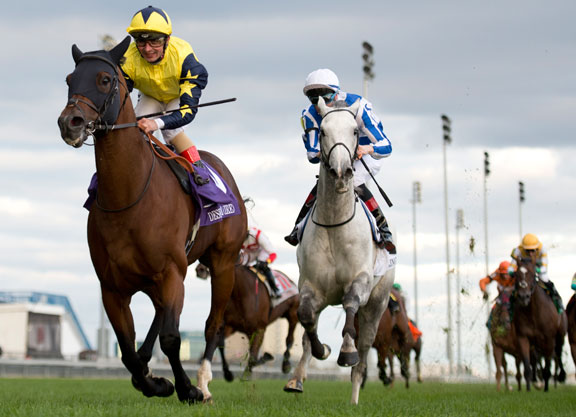 European raiders have won nine of the last 10 runnings of the GI Pattison Canadian International S. at Woodbine and the visitors have strength in numbers as they look to add to that total this weekend.

Desert Encounter (Ire) (Halling) invaded from England for the always-dangerous David Simcock yard and walked out of town with a one-length victory in last year’s International. Still going strong as a 7-year-old, the bay enters his title defense in arguably better form than he did 12 months ago, with consecutive victories in the G3 Glorious S. at Goodwood Aug. 2, the G3 Winter Hill S. at Windsor Aug. 24 and a one-length defeat of Pivoine (Ire) (Redoute’s Choice {Aus}) in the Sept. 23 Legacy Cup at Newbury. Desert Encounter won the latter event before finishing a close third last season.

Pivione defeated 20 rivals to scoop the John Smith’s Diamond Jubilee Cup H. at York in July, but was never dangerous when fifth, beaten over six lengths, by Bricks and Mortar (Giant’s Causeway) in the GI Arlington Million in August. The King Power runner was ninth in the G3 September S. over Kempton’s all-weather track before outrunning 14-1 odds to be second at Newbury.

The most recent North American-based horse to annex the International was the late Bullards Alley in 2017, and his full-brother Nessy (Flower Alley) will look to try to follow suit Saturday. A Keeneland allowance winner in April, the Sierra Farm homebred was a gaining third in the GIII Louisville S. over this trip May 18. Seventh in the Kentucky Downs Preview Turf Cup Aug. 4, he gave a good account of himself in this track’s GI Northern Dancer S. Sept. 14, charging from last of six to finish second to the GI Breeders’ Cup Turf-bound Old Persian (GB) (Dubawi {Ire}).

Ziyad (GB) (Rock of Gibraltar {Ire}) is the even-money favorite on the morning line courtesy of his last-out, half-length succcess in the G2 Grand Prix de Deauville Aug. 24, his lone victory from six runs this term. Prior to that effort , the Wertheimer homebred finished second in the G1 Grand Prix de Saint-Cloud, a neck behind the talented Coronet (GB) (Dubawi {Ire}) and a nose ahead of Lah Ti Dar (Ire) (Dubawi {Ire}).