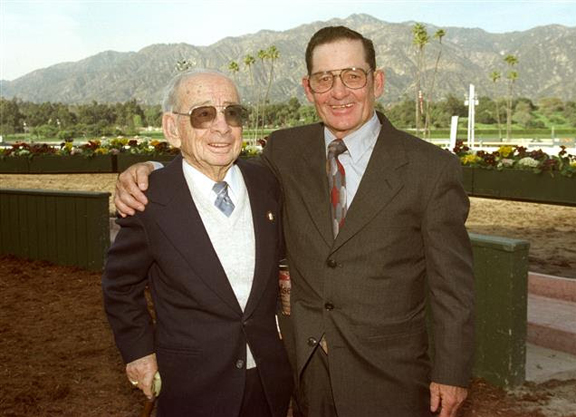 Raymond York, who rode Determine to victory in the 1954 Kentucky Derby at the age of 20, has died following a one-year battle with pneumonia at an extended care facility near Bakersfield, CA. He was 86.

“Ray passed away peacefully this past Sunday,” said Michael McKay, York’s longtime girlfriend. “He loved racing so much and all the people he had known over the years, but we haven’t been able to visit Santa Anita for several years due to his health,” she added. “We had a great time together and we traveled quite a bit. We went to China, Ireland, Italy, Nova Scotia, Alaska and we visited England three times.  Ray was so much fun, always laughing and always talking.”

Born Nov. 23, 1933 in Gloucaster, MA, won major stakes on both coasts and was considered among the leading riders of his era, which included Bill Shoemaker, Johnny Longden, Eddie Arcaro, Donald Pierce, Bill Hartack, Milo Valenzuela and others.

“In his day, Ray could ride with anybody,” said trainer Clay Brinson from his Turf Paradise. “Ray had great instincts and he was a big-money jock, no question. As a kid, he was one of the guys I looked up to and learned from. I rode with him in California and Chicago and he won a lot of races for my dad [trainer Ross Brinson].  Ray had a great personality and he gave everybody their money’s worth, owners, trainers and the people betting on the horses.”

York recorded his first major Santa Anita stakes win with Phil D. in the 1952 San Antonio H. Also winning the 1954 Santa Anita Derby with Determine, he won his second renewal of the race in 1959, aboard the Hall of Fame filly Silver Spoon, with whom he partnered to victory in that season’s Santa Anita Oaks. A winner of the 1964 Hollywood Gold Cup aboard Colorado King, York was a three-time leading rider at Del Mar (1957, 62 & 64) and would shift his tack to Turf Paradise in the late ’60s, where he won seven races in one day in 1970. Throughout a career which spanned seven decades, York won 26 added money events at Santa Anita, placing him 34th on the track’s all-time list. He also was voted the winner of Santa Anita’s George Woolf Memorial Jockey Award in 1955.

A longtime resident of Kern County, CA, York is survived by his girlfriend Michael McKay, and three children from his first marriage–daughter, Bonnie (Wunner) and two sons, Ray Jr. and Jeff York. Funeral services for York will be held at Erickson and Brown Funeral Home in Taft, CA, Saturday, Mar. 7 at 1 p.m.