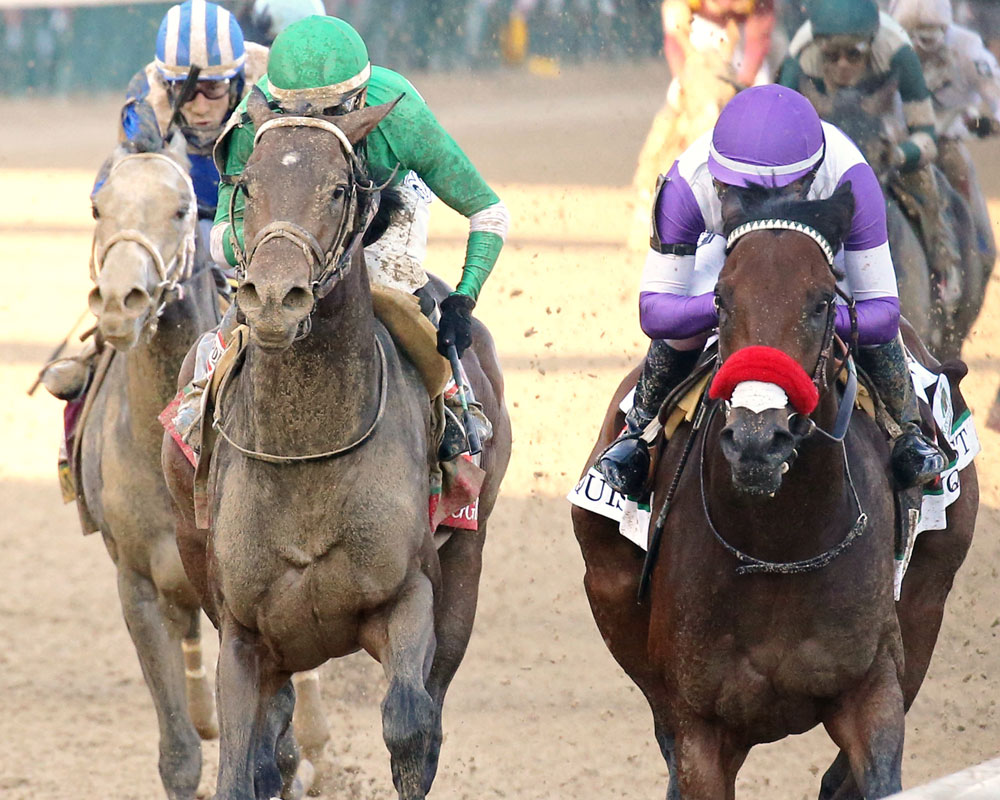 Nyquist proved many wrong in the Derby | Coady

A horse can't possibly have accomplished more heading into a race like the GI Kentucky Derby than Nyquist (Uncle Mo) had.

Seven starts, seven trips to the winner's circle. Never by an electrifying margin, and perhaps barring his season-opening defeat of Exaggerator (Curlin) in the GII San Vicente S.–a race many leaned on to cement an argument that maybe he was a better sprinter than a two-turn horse–absent any of that so-called “wow” factor.

Maybe we're just spoiled. After all, we are mere months removed from the first Triple Crown in 37 years accomplished by a horse who “captured the imagination” of the racing public. For whatever reason–I haven't been able to put a finger on it, but it's palpable all the same–Thoroughbred fandom has not embraced Nyquist the same way it did American Pharoah (Pioneer of the Nile).

Had to overcome the mother of all trips to win the GI Breeders' Cup Juvenile.

Had the nerve to come all the way to the East Coast, deep into Mohaymen (Tapit) country, and defused the buzz about that then fellow unbeaten in the GI Xpressbet.com Florida Derby.

The first undefeated 2-year-old champion coming into the Derby since Seattle Slew, the third most recent Triple Crown winner.

But, despite taking his record to a perfect eight out of eight last weekend under a letter-perfect ride from 'Super' Mario Gutierrez that belied its very audacity, there was a certain emptiness about Nyquist's win. Yet it was undoubtedly a performance every bit as good as that of California Chrome (Lucky Pulpit) in 2014 and, arguably, American Pharoah last year.

In a sense, even though Paul Reddam's runner drew 13, it became an ideal result when Danzing Candy (Twirling Candy) was assigned gate 20 and was going to have to burn across, alert beginning or not. Gun Runner (Candy Ride {Arg}) was one of several that wanted to be in that second flight and Florent Geroux was able to conserve some energy off the top two from the five hole.

None of that was unexpected. The pace, that the majority of pundits assumed would be modest at best was surprisingly fast, significantly quicker than in either of the past two renewals:

The contrarians (count me among them) wondered what was going to happen to Nyquist when they raced into that 10th furlong. A good many handicappers assumed that the bottom side of his pedigree wasn't going to do him any favors. But he hit the eighth pole still full of run, and despite sitting up on that taxing pace that saw most anything close to it burn off tamely in the lane, Nyquist saw out the trip well and held sway late.

I am not turning a blind eye to the perceived track 'bias' that may (or, truthfully, may not) have played a role in a horse like Exaggerator coming up short. Let's be fair about this. Exaggerator ran his race, found some trouble about three furlongs out. But I am not here to say it cost him the race. He certainly got home well from far back, as did Mohaymen (who was further behind than many expected), Suddenbreakingnews (Mineshaft), even horses like Mo Tom (Uncle Mo) (my selection, for the record) and Lani (Tapit), who beat fully 11 of his peers home. I am not sure I ascribe to the theory that the track was 'souped up.' I've seen crazier Derby tracks. The final times for the day's other two-turn races were very much on par. Yes, it may have played to those who were close to the pace, but nothing went wire-to-wire and my overall take was that closers were only marginally inconvenienced.

So, congratulations to Team O'Neill for charting a course and sticking to it. To Mario Gutierrez for making the most of his limited opportunities to put a world-class ride on his mount on a very big stage. And, last but not least, to Nyquist for doing nothing short of everything that's been asked of him.

It's time–for me and for many others–to give credit where credit is due.