Demarchelier: A Son Of Dubawi In Kentucky 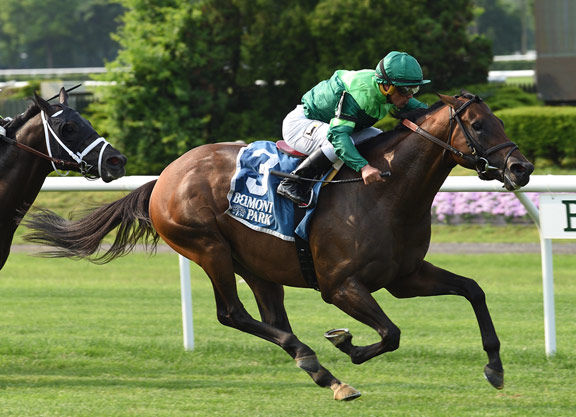 The continual increase in the popularity of turf racing in the U.S. has brought about an increasing demand for turf sires. More and more American buyers are shopping the European sales to fill their racing stables, while American breeders are interested in finding crossover stallions that have the potential to produce both turf and dirt runners. Now, a new opportunity will be available for breeders, with Claiborne Farm introducing 425,000gns TATOCT Book 1 yearling and 'TDN Rising Star' Demarchelier (GB), the first son of Dubawi (Ire) to stand in Kentucky, at $5,000 for 2020. Bred and consigned by Newsells Park Stud, the March-foaled bay was acquired by owner Peter Brant, with the assistance of Chad Brown, one of America's premiere turf trainers.

Claiborne's Bernie Sams said he believes Demarchelier will be a good fit for the U.S. “This is a great opportunity as we are seeing more and more grass racing in America than we used to,” he said. “Kitten's Joy has done well. War Front has done well. There are more and more grass horses and crossover stallions starting to stand here, and I think that Demarchelier can produce both.”

Sams says that breeders have already shown interest since the announcement for the new stallion was made on Oct. 2.

“Since we've made the announcement, I've had a tremendous response from people that want to breed to him,” he said. “We're going to sell some shares in the horse and have already sold half the shares. Everyone who has come out to see him really likes what they see.”

The Brant colorbearer is a son of Dubawi, ranked second behind Galileo (Ire) as leading sire in Europe by earnings, black-type winners, and group stakes winners. Dubawi has 41 Group 1 winners.

While most of Dubawi's progeny are turf runners, Sams said the sire line has dirt potential. “There really isn't any reason that he couldn't be a dirt sire. Dubawi is by Dubai Millennium (GB), who is by Seeking the Gold,” Sams said. “Seeking the Gold stood here at Claiborne and was a tremendous dirt sire as well as a turf sire.”

Sams pointed out some of the defining points of his resume. “He's a good looking horse. He's correct with plenty of bone and muscle,” he said. “He's also a smart horse with a nice side to him.”

Trained by Chad Brown, Demarchelier's career took off on debut at Aqueduct when he broke his maiden by a head over eventual stakes winner Seismic Wave (Tapit). The victory as a 2-year-old earned him 'TDN Rising Star' status. He continued his career at three with an allowance win at Keeneland going a mile and a sixteenth. Stepping up into graded stakes company, he kept his undefeated status stretching out to a mile and an eighth in the $200,000 GIII Pennine Ridge S. at Belmont in June. Although forced to go six wide and despite being bumped at the top of the stretch, he showed a good kick to close from the outside and take command of the field, winning by a neck over Seismic Wave. This field also included stakes winners Henley's Joy (Kitten's Joy) and Social Paranoia (Street Boss), who went on to finish first and second in the $1-million GI Belmont Derby Invitational S.

Returning to Belmont in July for the GI Belmont Derby Invitational S., Demarchelier settled three wide at the back of the field before taking a bad step and was eased up heading into the far turn.

When asked what defined Demarchelier's career on the track, Sams notes his remarkable turn of foot. “He could sit off the pace, and when it was time to go, he'd go. He showed turn of foot in all three of his races,” he said. “He beat good fields every time he won. I know Chad had told Peter Brant after his Grade III win that he shouldn't sell him under any circumstance.”

Demarchelier's undefeated career and regally-bred turf pedigree offers a new opportunity for American buyers. Sams said, “He has as good of a female family as any stallion that stands in Kentucky right now. And that's one of the reasons that you have to take a shot with this horse. He can run, he's by a proper sire, and he's got a big buzz.”