Home » Archive » Europe » Delmotte On The Trail Of Classic Glory

Delmotte On The Trail Of Classic Glory 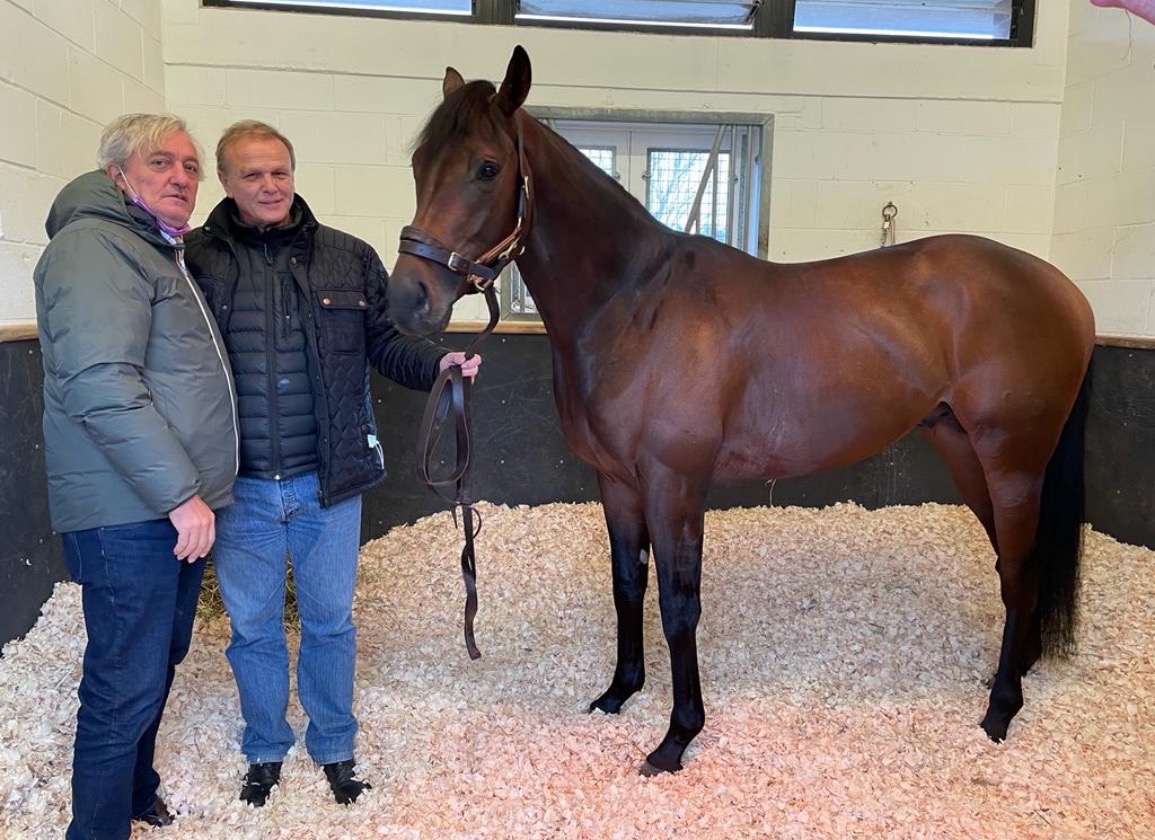 Every owner starting out in racing will have big dreams. That said, when José Delmotte first took a share in a racehorse more than 25 years ago, he may not have allowed his mind to wander as far as one day being the breeder of Europe's champion 2-year-old.

But that is where the Frenchman now finds himself. That one share led to a horse in training, followed by a few more, then some broodmares, the purchase of a farm in France's Orne region, and now that famous graduate of his Haras d'Haspel: Native Trail (GB) (Oasis Dream {GB}).

Godolphin's unbeaten Cartier Champion Two-Year-Old Colt of 2021 bears a British suffix as his dam Needleleaf (GB) (Observatory) was in the country to foal ahead of her 2019 visit to Kingman (GB). That latter mating made a lot of sense as the unraced Needleleaf, bought by Delmotte on the advice of his friend and bloodstock advisor Marc-Antoine Berghgracht, is a Juddmonte-bred full-sister to two Group winners, African Rose (GB) and Helleborine (GB). The latter had already produced an early star for Kingman in the young Coolmore sire Calyx (GB).

In fact both sisters are black-type producers as the G1 Haydock Sprint Cup winner African Rose is the dam of Fair Eva (GB), a first-crop stakes winner for Frankel (GB) when landing the G3 Princess Margaret Juddmonte S. on her second start. In hindsight, signing for the 2-year-old Needleleaf for 60,000gns in December 2015 now looks like an excellent bit of business.

“I like buying from Juddmonte. They are the best breeders in the world in my opinion and since I have been working with Marc-Antoine, that is for the past six years, we have always looked at their draft,” Delmotte told TDN during Arqana's Breeding Stock Sale in Deauville in December.

Arqana was also the scene for another of the breeder's highly memorable moments of 2021 back in August when Native Trail's Kingman half-sister sold through the Haras d'Haspel draft for €950,000. It will come as no surprise that the buyer was Godolphin's agent Anthony Stroud, who earlier in the year had signed for Native Trail at the Tattersalls Craven Breeze-up for 210,000gns. It was the colt's third sale of his short lifetime, with Delmotte having sold him as a foal to Sam Sangster for €50,000, who then reoffered him as a Book 1 yearling for 67,000gns at October Book 1, where he was bought by Mags O'Toole and Norman Williamson to go breezing.

Needleleaf's first two living offspring have clearly been given a collective thumbs-up from a range of experienced horse folk and she has swiftly risen to become the star of Haras d'Haspel's band of 50 mares.

Delmotte recalled his first encounter with the mare in Newmarket. He said, “There was this unraced 2-year-old filly, a sister to two Group winners which had been retained by Juddmonte to breed from. So it seemed logical for them to sell [Needleleaf] as she wasn't as talented as her sisters and they already had several mares from the same family. I bought her because of her Group-winning relatives and also because of her sire [Observatory]. I liked the fact that his bloodlines were quite different from those you normally find in Europe, so I thought she would be easy to mate.”

He added, “We had some misfortune with her as her first foal, who was a magnificent Siyouni (Fr) filly, died a few months after birth. But the following foal was Native Trail and he has secured his place in the history books, which is amazing.”

Despite that early setback, Needleleaf's broodmare career has been relatively plain sailing since then. It didn't take long for Native Trail to start dropping massive hints as to his ability. Two months after the breeze-up sale, he won on debut at Sandown and followed up a month later with victory in the G2 Superlative S. at Newmarket's July Course. With his sister then signed up to the Godolphin team from the August Sale, he went on to enhance both their pedigrees further still, with back-to-back Group 1 wins in the Goffs Vincent O'Brien National S. at the Curragh followed by the Darley Dewhurst S., earning himself a closing mark for his 2-year-old season of 122. The winter favourite for the 2000 Guineas is safely tucked up at Charlie Appleby's Godolphin base at Moulton Paddocks, where his breeder paid him a visit during the December Sales.

“I would like to take this opportunity to thank Godolphin as they bought his sister from me and welcomed us, with Marc-Antoine and a few friends, to their private training centre in Newmarket and we were treated like royalty,” said Delmotte. “We were allowed to see and hold Native Trail and we had a very open, no-filter discussion with Charlie Appleby about his future plans. It was great, they were so kind to us.”

With Frankel having already worked well with her family, Needleleaf is currently in foal to his young son Cracksman (GB) and she has a yearling filly by Siyouni. Now nine, the mare is one of around 15 that Delmotte will send from France to either Britain or Ireland this covering season, and in Needleleaf's case it will be to Newmarket for a date with Dubawi (Ire).

“I had to! It is not our usual strategy but I had to give her an exceptional mating,” said Delmotte. “We continue to upgrade our broodmare band but I don't want to go crazy. I don't want to spend €500-600,000 on a broodmare. I try to invest in good families and then work very hard on matings. I prefer to use proven sires, that is why I sent Needleleaf to Oasis Dream. I like him and find that he suits a lot of European bloodlines. I try to remain sensible.”

The 300-hectare Haras d'Haspel, based in good breeding country between Haras du Logis and Haras de Montaigu, was also associated with some Classic names during 2021. Berghgracht's MAB Agency signed for a filly foal by The Wow Signal (Ire) for €24,000 from the 2018 Arqana Breeding Stock Sale and, reoffered the following August, she was sold by Haras d'Haspel for €40,000 to Jean-Claude Rouget, for whose stable she won last year's G1 Poule d'Essai des Pouliches.

Furthermore, the Dalakhani (Ire) mare Biancarosa (Ire) is a boarder at Haspel for Teruya Yoshida, owner/breeder of Tokyo Gold (Fr) (Kendargent {FR}), who was born and raised at the farm and won the G2 Derby Italiano in 2021 for Chantilly-based trainer Satoshi Kobayashi. Delmotte also enjoyed a homebred stakes winner of his own in the Fabrice Chappet-trained Bel Aristo (Fr) (New Approach {Ire}), a progressive stayer whom he races in partnership with Antoine Gilibert. Meanwhile on the National Hunt side, the unbeaten Jonbon (Fr) (Walk In The Park {Ire}), a full-brother to Douvan (Fr) who set a new record price for a point-to-pointer when sold for £570,000 at Goffs UK in 2020, was born and raised at the stud for breeder Lotfi Kohli.

“I have always loved horses. My business is in property development and one of my agents had racehorses. I bought a share with him some 25 years ago and ending up owning the horse outright,” Delmotte recalled.

“That's how I started. I had racehorses, then kept a few broodmares and bought a property to keep the horses. My daughter and her husband were involved in dressage, she was working in a company but wasn't very happy there and what she really loved was horses, so I bought her a farm.”

What started out as a family passion has resulted in one of the most exciting horses in training in Europe, and though Native Trail has already achieved plenty, naturally his breeder's thoughts have now turned to the Classic season ahead.

He added, “His trainer told us he that is a very laidback horse, and I think he can be a very, very good 3-year-old. If you look at his last race, he just kept lengthening his stride to the finish line. He was truly awesome in the final furlong. It is a dream for me. I am pinching myself.”