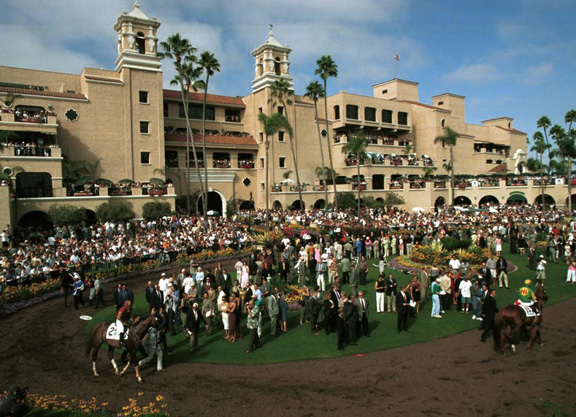 On the one hand are all the positives to highlight, like the additions they've made to their “Ship & Win” program, the automatic check for new imports increased to $2,500, and the first-race purse bonus raised to 40%. The Del Mar turf course, said Jerkens, is the “best in the country.” That, and the main track “performed great last year,” he said. “So, our surfaces I'm very confident in.”

The nominations which closed Friday for a number of major stakes races were also “very encouraging,” said Jerkens. “Our numbers are right where they were a year ago. That's very good news.”

Nevertheless, there's no escaping the hovering specter of events at Santa Anita this year, and the laser-focused scrutiny the state's racing industry is currently under.

One area the sport has been impacted is field sizes. Just look at Santa Anita, reduced to racing three days a week. Or to Los Alamitos, where the threat of small field sizes meant the facility proved unable to maintain its four-day race-week.

Indeed, the horse population in Southern California is down around 10 to 15%, admitted Jerkens, adding that this deficit is seen at facilities like San Luis Rey Downs and Los Alamitos. San Luis Rey general manager Kevin Habell confirmed that the facility has between 30 and 50 fewer horses than is typical for this time of year.

That said, come Opening Day, the backstretch inventory at Del Mar is expected to total around 1,900 horses “or so,” said Jerkens–the maximum amount currently permitted on the grounds. This will, of course, include horses formerly trained by Jerry Hollendorfer who will now race under his assistant, Dan Ward. Though Del Mar can accommodate as many as 2100 horses, track management decided to reduce horse numbers at the facility in recent years to ease traffic during training of a morning.

It's no surprise, then, that Jerkens described as a “primary goal” of Del Mar the need to “stabilize” the existing horse population. “When racing was suspended in March, various trainers sent strings to Kentucky and elsewhere,” said Jerkens. “Part of our responsibility and goal during that period was to try to reach out to those individuals [and say], 'Del Mar is running this summer. We want you back.' And we were able to accomplish that.”

One of those trainers is Doug O'Neill, who sent horses to Oaklawn and Keeneland in the spring. He told the TDN that he'll bring three horses back from New York Wednesday. Not that O'Neill had a significant presence out-of-state this year.

“I had spoken with [The Stronach Group COO] Tim Ritvo before the meet started, promised that I would be a full-time supporter of Santa Anita,” O'Neill said. “I wanted to stick to that promise, and we ran a lot of horses there.”

On the flip side of the same coin, Peter Miller told The San Diego Tribune that he has moved a third of his 75 horses to Kentucky.

Digging down into particulars, the current Southern California horse population is threadbare in a few important areas, explained Jerkens, including 2-year-olds.

“Things that happen in March and April influence July and August,” he explained. “When there was uncertainty at Santa Anita in March and April, traditionally that's when owners back East send 2-year-olds to California trainers.”

On top of that, where out-of-state trainers might have fortified the numbers, not so this year. Yes, Del Mar has seen an increased presence from Northern California trainers, said Jerkens. “And we do have a few trainers from back East, James DiVito, and a few trainers from the northwest,” he added.

Nevertheless, the “perception” of California racing in light of recent events has made out-of-state recruitment “very challenging,” Jerkens said. Some of the horsemen he spoke with voiced confusion about some of the reforms instituted in recent months, Jerkens added. This includes tightened medication policies and proposed changes to use of the whip.

“That was a big issue,” said Jerkens, about the whip issue. “I had one trainer say, 'Do they even allow the riding crop anymore?' Of course, it's not true, but it's that negative perception.”

“The industry relies on us to fill five days a week,” said Jerkens.

To do that, Del Mar may reduce the number of races throughout its 36-day meet.

“I like to call it four-and-a-half days-a-week, where we may reduce four races a week on average,” said Jerkens, emphasizing how his approach to the problem is “fluid.”

The average field size at Del Mar last year was a noteworthy 8.7. When asked whether he'll use that number as a benchmark for shaping the program this year, Jerkens replied in the affirmative.

“We're going to have to be as resourceful as possible,” he said, adding that he'll utilize data analytics to better understand the horse population, as well as “good old-fashioned communication” with the trainers.

The white noise currently surrounding the industry, however, is welfare, welfare, welfare. Last year, Del Mar's fatality rate was 0.79 catastrophic injuries per 1,000 starts–less than half the national average for deaths (1.68). The facility recently announced what safety measures it will implement this year, to build upon the work done previously.

The recently instituted five-person entry review panel, of course, is a new addition to the landscape. Some horsemen, however, have voiced–though not on the record–frustration with the panel, arguing that it sometimes unfairly targets horses that shouldn't be prevented from racing. California Horse Racing Board (CHRB) equine medical director Rick Arthur describes as “uninformed” that reaction. “If [horses] should have run, they would not have been removed by the panel,” he said.

Arthur described the panel, and the trainers' response to it, as a work in progress–something reflected in the stats. According to CHRB numbers, there were 38 scratches and denied entries for the final six programs at Santa Anita, compared with nine panel rejections of entries for the Los Alamitos programs.

As a “work in progress,” further modifications have been made to the way the panel will operate at Del Mar, Arthur said. At Santa Anita and Los Alamitos, the panel met and reviewed horses before entries were taken. At Del Mar, “the panel will meet after entries are taken,” said Arthur. “We think this will be a more efficient way to do it for everyone,” he added. “It was very cumbersome for the racing office and the panel the way we were doing it.”

Veterinary members of the panel along with additional attending veterinarians, said Arthur, will also be looking “more and more” at horses after entry and before their usual pre-race examinations, as well as at horses identified for extra scrutiny by the veterinarians monitoring morning training. On top of that, additional veterinary and secretarial staff will be employed to “make sure we can get the information we need to make sure only horses that are suitable and fit to race are allowed to race,” said Arthur.

“We think we have personnel that will allow us to do what, frankly, what we've always wanted to do, but, never had the backing to get that done previously,” he added.

Another new addition to the Del Mar furniture is a stakeholder advisory committee that will meet once a week to discuss things like safety practices, daily operations and the state of the track surfaces. The committee will include Del Mar track superintendent Dennis Moore and Del Mar's executive vice president for racing and industry relations Tom Robbins, said Jerkens.

“Again, it's about keeping that open communication and open dialogue between horsemen, management and track superintendent,” he said, about the purpose of the committee.

It's also one of the factors that Jerkens gives for entering into the meet with what is probably best described as a sense of cautious optimism.

“I still think we're grateful and appreciative of those who are participating this summer, and, honestly, we still should have a successful meet.”