Del Mar-Bound Justify to be Reassessed in 2-3 Weeks 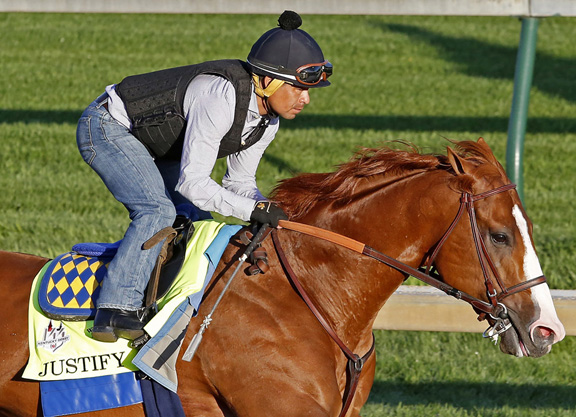 China Horse Club, Head of Plains Partners, Starlight Racing and WinStar Farm's Triple Crown winner Justify (Scat Daddy), who was found to have filling in his left front ankle, will travel to trainer Bob Baffert's summer base at Del Mar as his connections continue to monitor the condition, Baffert confirmed to the TDN Wednesday. As first reported by the Daily Racing Form, the setback will cause him to miss a potential start in the GI Haskell Invitational at Monmouth Park July 29.

“Two to three weeks,” Baffert told the TDN when asked how much time the star colt would be given until the next evaluation.

With Justify limited to walking the shedrow as the Baffert crew takes a cautious approach with the undefeated 'TDN Rising Star,'future racing plans remain up in the air. Baffert said the filling appeared last week, subsided soon after, but reemerged in recent days, prompting the decision to back off on his training.

Justify's rapid rise to the top of the game began with a maiden victory at Santa Anita Feb. 18 and saw him add four consecutive Grade I victories, culminating with a sweep of the Triple Crown in the GI Belmont S. June 9.

“To go from a maiden winner in February to an undefeated Triple Crown winner in June has been an incredible ride,” WinStar Farm President/CEO and Racing Manager Elliott Walden said Tuesday. “He is too special to the owners, our team, and all the fans he has around the world to not be 100% healthy.”