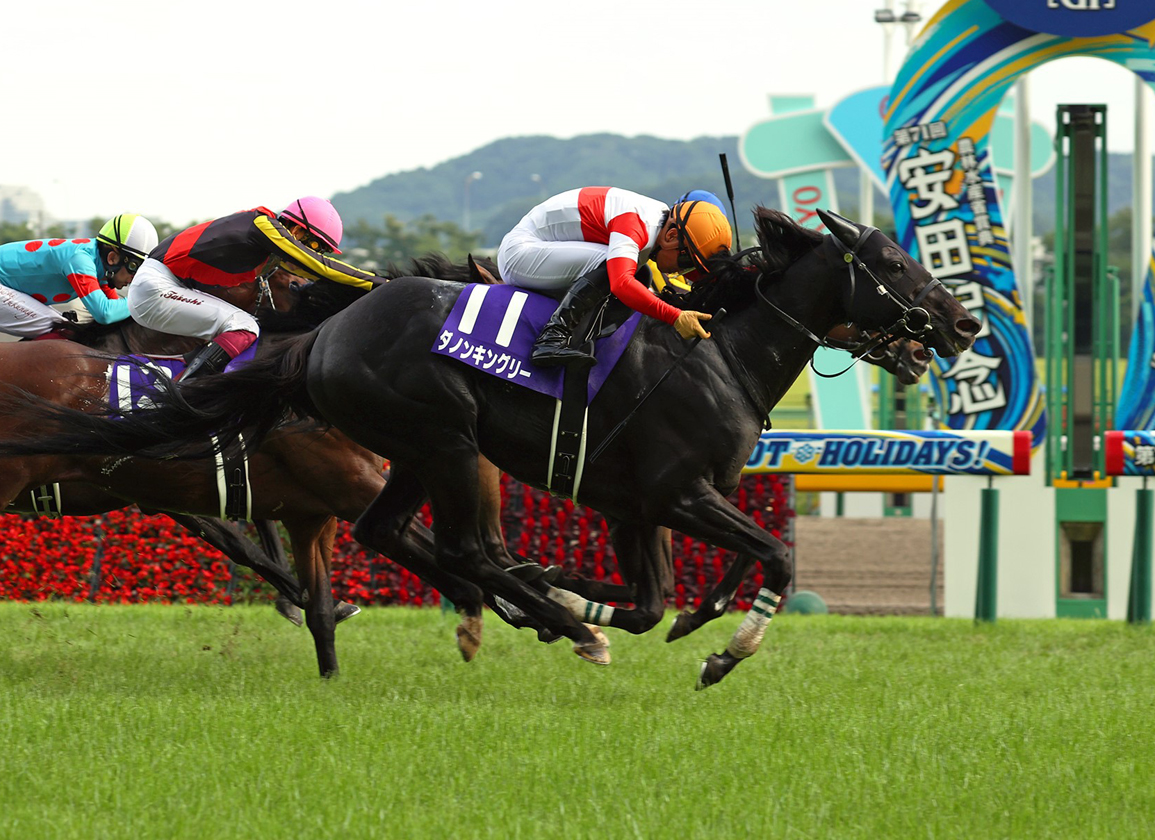 Danox Inc.'s Danon Kingly (Jpn) (Deep Impact {Jpn}) dethroned MG1SW Gran Alegria (Jpn) (Deep Impact {Jpn}) in her bid to win back-to-back G1 Yasuda Kinens, with a narrow victory at Tokyo on Sunday. It was the 5-year-old entire's first win at the highest level after he had been placed in a pair of Classics in 2019 and the race is a “Win And You're In” for the GI Breeders' Cup Mile this fall.

Sent off at 47-1, Danon Kingly perched three deep in midfield as Daiwa Cagney (Jpn) (King Kamehameha {Jpn}) rattled off fractions of :23.30 for the opening quarter and :46.40 for the half-mile over the firm turf. Winding up for his bid on the far turn, the bay fanned widest of all bar two at the 400-metre mark. He was soon in touch with the leaders, but inside the final furlong, anyone of four were in with a shot.

Favoured at 50 cents on the dollar, Gran Alegria, who had arrived on the scene from farther back than Danon Kingly, thrust her head in front in the shadow of the wire towards the inside, but the winner was flashing home even more strongly and got his head down first at the line. It was only a half-length back to Group 1 winner Schnell Meister (Ger) (Kingman {GB}) in third to the inside of Danon Kingly, while only a neck separated him from fourth-place Indy Champ (Jpn) (Stay Gold {Jpn}), who'd won this affair in 2019, and was sandwiched between the second and third home.

“He felt a bit tense first entering the track but he had good rhythm during the trip and had plenty of horse left,” said jockey Yuga Kawada. “He responded just as I hoped turning the last corner and ran well after that. Although he hasn't been

able to put in the best results in the past, he has definitely demonstrated his true strength today and I'm happy to have been a part of it in my first time in the saddle.”

Unbeaten in two starts as a juvenile and in his 3-year-old bow, the 2019 G3 Kyodo News Hai, Danon Kingly ran third in the G1 Japanese 2000 Guineas and went one better in the G1 Japanese Derby in May of that year. Given some time off, he returned with a win in the G2 Mainichi Okan that October and, after an unplaced run in the G1 Mile Championship, returned at four to take the G2 Nakayama Kinen first up over 1800 metres last March. Third in the G1 Osaka Hai last April, he ran unplaced in both the 2020 Yasuda Kinen and in the Nov. 1 G1 Tenno Sho (Autumn). This was his first start at five.

Danon Kingly is the 51st Group 1 winner for his late sire, who celebrated another Classic winner in the past few days with record 16-length G1 Cazoo Oaks heroine Snowfall (Jpn). Of the former Shadai stallion's 175 black-type winners and 142 group winners, 16 are out of Storm Cat mares. Group 1 winners A Shin Hikari (Jpn), Loves Only You (Jpn), Kizuna (Jpn), Satono Aladdin (Jpn), Real Steel (Jpn), Study Of Man (Ire), Lachesis (Jpn) and Ayusan (Jpn) are bred on this cross. Of these nine, four won Classics in Japan and France.

A winner at three, My Goodness's first foal is G3 Capella S. victor Danon Legend (Macho Uno), who was purchased for $385,000 out of the Barretts March sale in 2012 and sent to Japan. Her 2012 produce was the Japanese listed winner Danon Good (Jpn) (Elusive Quality). Danon Kingly is the most decorated of her nine offspring, while he is also a half-brother to the 3-year-old colt Danon Velocity (Jpn) (King Kamehameha {Jpn}), a 2-year-old full-brother to Danon Velocity and a yearling filly by Heart's Cry (Jpn) yet to come. My Goodness, a half-sister to American Champion 3-Year-Old Colt West Coast (Flatter), a winner of the GI Travers S. and GI Pennsylvania Derby, visited the court of Epiphaneia (Jpn) last spring.

The duo are out of U.S. Champion 2-Year-Old Filly Caressing (Honour and Glory), whose biggest claim to fame was a win in the GI Breeders' Cup Juvenile Fillies, but who also struck twice at Grade III level Stateside. She, in turn, was a half-sister to Listed Natalma S. heroine Platinum Blonde (Silver Hawk). This is the extended family of GI Donn H., GI Meadowlands Cup H. and GI Gulfstream Park H. hero Sea Cadet (Bolger), as well as GII Del Mar Futurity victor and GI Champagne S. third On Target (Forty Niner), both later sires.