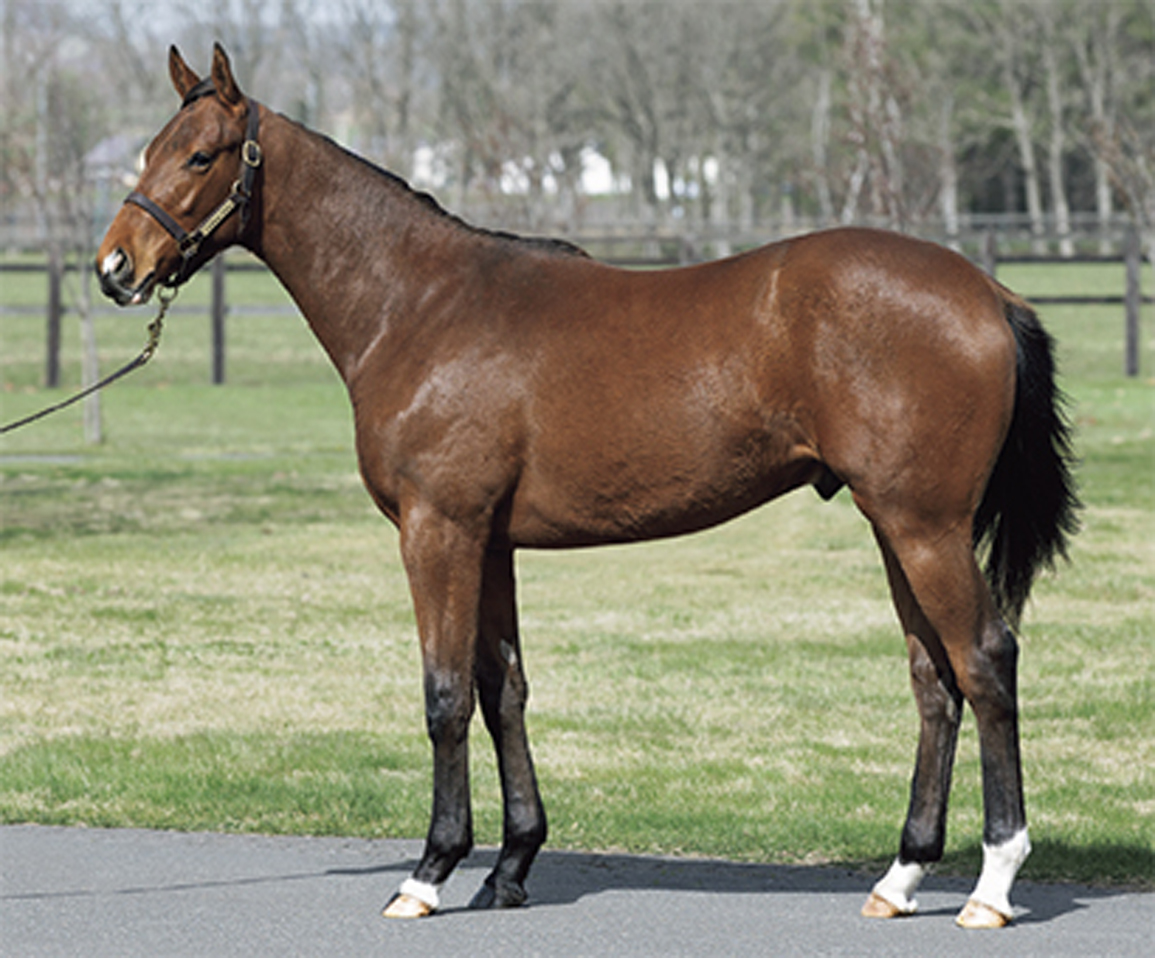 Though he is gone, Deep Impact (Jpn) is far from forgotten, Shadai's breed-shaping sire having this year provided Classic winners in both his native country and in Britain in the form of the 16-length G1 Cazoo Oaks winner Snowfall (Jpn). He retains his position atop the Japanese sire standings, where he has sat uninterrupted since 2012, and the presence of four of his last-crop yearlings in Monday's opening session of the JRHA Select Sale were unsurprisingly among the very highest draws for buyers at Hokkaido's Northern Horse Park. His colt out of GII Black-Eyed Susan S. and GII Gulfstream Park Oaks winner Go Maggie Go (Ghostzapper) was given the generally unenviable first appointment in the ring, but class told through, with the colt (lot 1) fetching ¥300-million ($2,724,435/€2,298,612/£1,965,600) from Yuji Hasegawa.

As is always the case when a leading light goes out, however, another rises to fill the void, and Lord Kanaloa (Jpn) has proven a revelation in recent seasons. Free of Deep Impact–being by another former giant of the sire ranks, King Kamehameha, and out of a Storm Cat mare–Lord Kanaloa sits on Deep Impact's heels on the sire table and matched his former Shadai barnmate in the ring on Monday, with a colt out of American champion female sprinter Finest City (City Zip) (lot 100) coming along midway through the session to share the ¥300-million top-price honours when bought by new owner Susumu Fujita. Upon conclusion of trade, Lord Kanaloa colts filled three of the top five spots on the leaderboard. Sixteen different stallions had yearlings sell for ¥100-million or more on the day, something that would have been unheard of during the Deep Impact era of domination, during which the late King Kamehameha (Jpn) and recently pensioned Heart's Cry (Jpn) were also prominent. 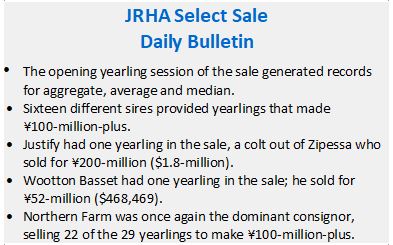 “From the beginning of sale at 10:00 a.m. to the conclusion of sale at 7:30 p.m., the market was very strong all the way through,” said Katsumi Yoshida of Northern Farm, which was the session's leading consignor selling the top four lots, eight of the top 10 and 22 of the 29 ¥100-million-plus offerings. “I would like to thank all consignors for offering yearlings of the highest quality. I am very impressed to see 16 different stallions represented by yearlings sold for more than ¥100-million. While we lost two big names, Deep Impact and King Kamehameha, two years ago, we have a depth of excellent stallions now. And I am very glad to see so many new players active at [Monday]'s market.”

Incredible Impact To Live On

Racing as a homebred for Mike Tarp with trainer Dale Romans, Go Maggie Go, the dam of Monday's co-topper, won the Gulfstream Park Oaks in just her second lifetime start in 2016 before finishing fourth behind Cathryn Sophia (Street Boss) in the GI Kentucky Oaks. She built on her immense promise with a victory next out in Pimlico's Black-Eyed Susan S. before again finishing fourth in Grade I company in the Acorn S. Sold to Katsumi Yoshida for $750,000 at the 2017 Fasig-Tipton November Sale, Go Maggie Go produced as her first foal the Heart's Cry (Jpn) filly subsequently named Logi Maggie Go (Jpn), who sold for ¥44-million during this session last year and who has placed on debut since the catalogue was published.

Hiroyasu Takeuchi, bloodstock advisor to Hasegawa, said, “We inspected all four yearlings by Deep Impact, and we are convinced this is the best one. He is a very gorgeous individual and a good walker. I like his pedigree, because he has Deputy Minster and Storm Cat, both of which work very well with Deep Impact. Market watchers were saying beforehand he would cost at least ¥500 million and we thought he was worth it. I am very happy to acquire him for ¥300 million.”

Though the likes of Kizuna (Jpn) has started well, Deep Impact has yet to have a sire son really set the world on fire. There is plenty of time for that to change, however, and it could well be imminent with a plethora of top-class sons just getting going in their stud careers in Japan and Europe. Five sons of Deep Impact were represented by $1-million-plus yearlings on Monday, four of whose first crops are yearlings and one with his first runners this year.

A surprise package among those has been Silver State (Jpn), a four-time winning son of Deep Impact-but not a stakes winner–who leads the Japanese first-season sires standings at this early juncture with five winners. Precocity has historically not been a sought-after trait among Japanese breeders, but it is interesting that Silver State himself won in July of his 2-year-old campaign and set a track record when breaking his maiden over a mile at Chukyo. Silver State jumped up to third on the leaderboard late in the session when his colt (lot 241) out of Guillem (Jpn) (Medaglia d'Oro), an unraced daughter of American champion 2-year-old filly Awesome Feather (Awesome Of Course), fetched ¥260-million ($2,359,400/€1,991,600/£1,702,740) from Tetsuhide Kunimoto. Awesome Feather was sold to Katsumi Yoshida for $1.9-million at Fasig-Tipton November in 2013 carrying Guillem, her first foal. Awesome Feather's second foal is the Group 2-placed Super Feather (Jpn) (Deep Impact {Jpn}), and her most recently reported progeny is a King Kamehameha 2-year-old filly. The Silver State colt is Guillem's first foal. Silver State is a half-brother to the Australian Group 1 winner Seville (Ger) (Galileo {Ire}), who was also second in the G1 Irish Derby, G1 Grand Prix de Paris, G1 Racing Post Trophy and G2 Dante S. Silver State stands for ¥1.5-million ($13,592/€11,464/£9,793) at Yushun Stallion Station in Hokkaido. Silver State had three yearlings sell on Monday; the others each brought ¥40-million ($362,492/€305,680/£261,152).

Lord Kanaloa has gone from strength to strength since his first runners hit racecourses in 2017, and his run has continued apace thus far this season with G1 Takamatsunomiya Kinen and G1 Hong Kong Sprint victor Danon Smash (Jpn) among his 11 stakes winners this year. Lord Kanaloa's leading light on Monday was the colt out of Finest City–herself a $1.5-million Fasig-Tipton November purchase by Katsumi Yoshida in 2017–and his purchaser, Susumu Fujita, was leading buyer on the day with 12 purchased for ¥1,541,000,000 ($13,963,848/€11,775,788/£10,058,033). Fujita is the chief executive officer of Cyber Agent Inc. and burst onto the Thoroughbred ownership scene in May with the purchase of a ¥470,010,000 colt from the last crop of Deep Impact at the Chiba Thoroughbred Sale; normally a much lower profile sale on the Japanese circuit. Finest City, winner of the GI Breeders' Cup Filly & Mare Sprint whose eldest foal is a 2-year-old colt by Frankel (GB), has a colt foal by Rey de Oro in Tuesday's foal session.

The session also featured the first yearling to be offered by American Triple Crown winner Justify, and the colt out of GI First Lady S. winner Zipessa (City Zip) (lot 113) was likewise knocked down to Makoto Kaneko for ¥200-million ($1,812,447/€1,528,646/£1,305,655). Zipessa was bought by Katsumi Yoshida in foal to Medaglia d'Oro for $1.25-million at Keeneland November in 2018, with that resulting colt retained. Justify is again represented by one lot in Tuesday's foal sale, but he is sure to turn plenty of heads, being the second produce of the 2016 GI Breeders' Cup Juvenile Fillies winner and champion Caledonia Road (Quality Road).